- Tous Les Jours has opened its 1st and 2nd Mongolian stores a fortnight apart from each other. The two stores have successfully entered the Mongolian market, generating more than twice the amount of estimated sales.
- Efficient management with promising prospects: among all Korean bakeries, Tous Les Jours has the largest number of stores through master franchise agreements, etc. and is operating in the largest number of countries.

Tous Les Jours, the first Korean bakery to enter the Mongolian market, has opened its 1st and 2nd stores in Ulaanbaatar, Mongolia, laying the groundwork for conquering global bakery markets.

Freshness-filled bakery Tous Les Jours (www.tlj.co.kr) announced on the 15th that it opened its 1st and 2nd stores a fortnight apart from each other in Ulaanbaatar, the capital of Mongolia. Tous Les Jours' entry into the Mongolian market is the first achievement after it signed a master franchise agreement with a local Mongolian company this past May. It is very significant in that this is the first time a Korean bakery opened a store in Mongolia.

With the opening of its Mongolian stores, Tous Les Jours has made a Korean brand known in the Mongolian market, which is mainly populated by local brands, and has also established a bridgehead for spreading its brand further into Central Asia. Tous Les Jours's 1st and 2nd Mongolian stores were set up in a major commercial area of Ulaanbaatar, the capital of Mongolia. The 1st store opened in the center of a gourmet street lined with upscale Mongolian restaurants and pubs. It is a large store that covers an area of 160 pyeong and is equipped with 109 seats, and the front of its building is decorated with Tous Les Jour's own brand identity, exposing and drawing attention to the brand in a highly effective way. An official from the company noted, "The first day of opening was very cold, at minus 23 degrees Celsius, but the store became flooded with as many as 2000 customers and eventually achieved sales of 10 million won. The people's welcoming of the opening of a Tous Les Jours store was obviously felt."

The 2nd store opened on the first floor of Shangri-La Mall, which is located next to Ulaanbaatar's Shangri-La Hotel where the 2016 Asia-Europe Meeting (ASEM) Summit took place this past July. The 2nd store proved to be popular, attracting more than twice the number of estimated customers. The store is situated in a mall affiliated with one of Ulaanbaatar's most luxurious hotels, and its location is expected to facilitate the spread of Tous Les Jours' excellence farther and wider. 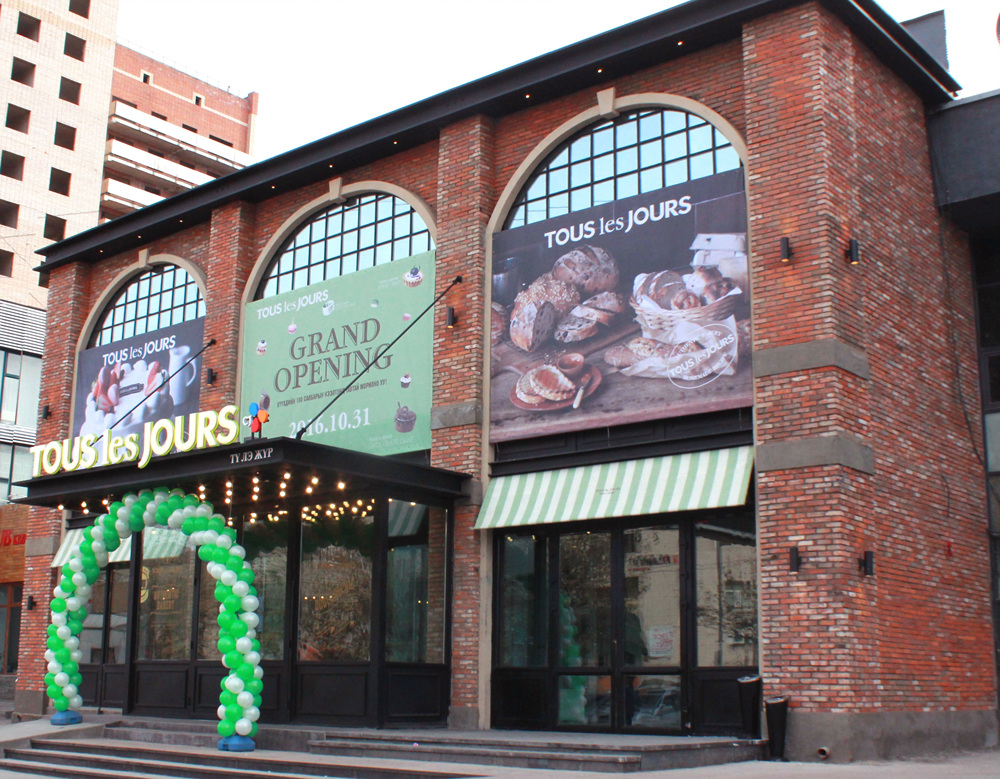 Among all Korean bakeries, Tous Les Jours is operating in the largest number of countries and owns the largest number of stores. Tous Les Jours flexibly employs master franchising (MF: a business method whereby the owner of the brand name hands over the control of the franchising activities in a specified territory to an entity and then receives fees and royalties from the entity), and the company is regarded as running the most successful and efficient business model. Tous Les Jours landed its first franchise agreement in the U.S. in 2009. In the case of China, the company entered the markets of the country's major cities on its own while entering those of 11 provinces and autonomous regions through MF. In addition, Tous Les Jours entered the Vietnamese and Indonesian markets on its own while entering the Philippine, Malaysian, and Cambodian markets through MF.

A CJ Foodville official said, "Our overseas business which has been running since 2004 has recently begun to gain some noticeable momentum. We have a long way to go compared to the world's top global brands, but as a bakery brand representing Korea, we will push forward our business more aggressively to become a towering leader in global markets."