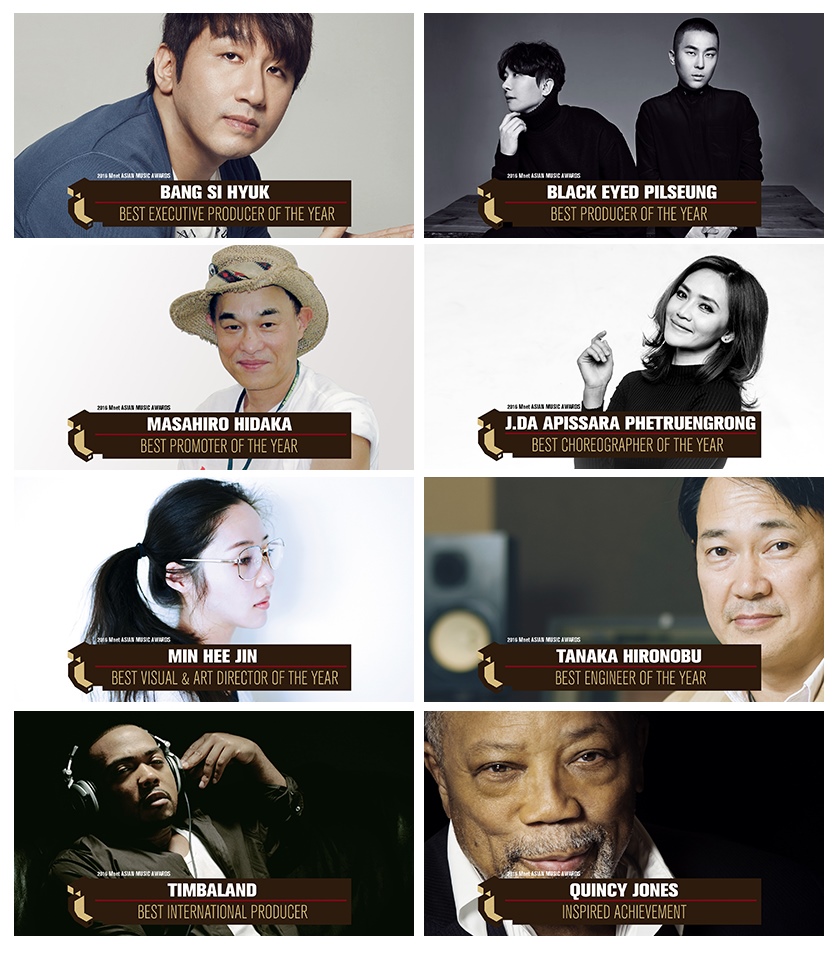 The 2016 Mnet Asian Music Awards (MAMA), the best music award event in Asia, was successfully held and once again proved the stature and authority of the MAMA which leads the development of the Asian music industry.

The 2016 MAMA featured not only “the award ceremony” but also the “Red Carpet” event where stars and global fans communicated with each other, the “Creators’ Forum” that serves as a hub of the global music industry and the “Convention” to help SMEs advance into global markets among others.

Among them, the 2016 MAMA Professional Category Awards is an award ceremony for all people in the music industry who contributed to the development of the music industry in Asian countries in terms of art and technology. In 2015, the ceremony started in three categories: The Best Producer, Best Engineer and Best Performance (Sound / Directing / Producer)

Tanaka Hironobu was selected as the Best Engineer is a sound engineer who contributed to a cumulative 40 million in sales of the Japanese female idol group AKB48 by achieving delicate sounds with technical elements loaded with musical sensitivity. Min Hee-Jin was selected as the Best Visual & Art Director participated in visual directing of SHINee and EXO and presented creative ideas and sensual visual art. Min took the lead in the advent of a video music era.

J.Da (Apostara Phetruengrong) is one of Thailand's top choreographers and the only female judge of the US World Hip Hop Championships. She is acknowledged not only in Asia but also throughout the world, and entertains people with artistic and dynamic choreography and at the same time, takes the initiative in the popularization of dance. Masahiro Hidaka was singled out as the Best Promoter of the Year, planned the first music festival in Asia and has held the Fuji Rock Festival for 20 years which recorded a total of two million audience members. Hidaka has been accredited for making a great contribution to music festivals in Asia.

Black Eyed Pilseung, the winner of the Best Producer Prize is a production team composed of Choi Kyu-Sung and Rado. The team was formed in 2014 and participated in the production of songs of numerous girl groups such as Sistar, Ailee, Twice and others. In particular, the team played a great role in the new genre of Color Pop, which led Twice to the top of streaming services this year. “Hitman” Bang honored as the Best Executive Producer is the best songwriter, producer and executive producer in Asia who has grown BTS into a top global artist in three years since their debut. He is leading the Asian music industry from discovering artists to content planning and production.

The Prize in Special Categories is awarded to a person who contributes to the development of the music industry such as creating a new culture and instilling the value of innovation and challenges in the world's music history. Timbaland is a star producer of Justin Timberlake, Eminem, Madonna, and Linkin Park. He is serving as a role model for Asian hip-hop musicians as well as hip-hop artists in the United States, inspiring many artists. Quincy Jones, the winner of the Inspired Achievement Prize, is a world-renowned producer who produced albums of Michael Jackson, Frank Sinatra and U2. For 60 years, he greatly contributed to the development of the music industry through various music activities such as Asian musicians’ global advancement.

Previous
< When You Go There >