The pride of Icheon that grows lives has been continuing these days. Season’s Table that promotes the importance of seasonal ingredients from our land acknowledges the value of Korea’s valuable agricultural products.

Farming, The Path I Found After Failure

On vast farming land of approximately 40,000 pyeong (one pyeong: 3.954 sq. yds.), a farmer can be found who tells farming stories, saying, “Here is a place where garlic seeds have been planted,” “As it is fall now, lotus leaves are falling but lotus roots are growing under the ground,” and “I sowed green onion seeds in that field.”

The farmer’s appearance gave off a feeling of strong dedication! A deep-rooted love for fields is emitted from “Lotus Village,” the agricultural cooperative of Kim Dong-Woo, a farmer who grows eco-friendly agricultural products. 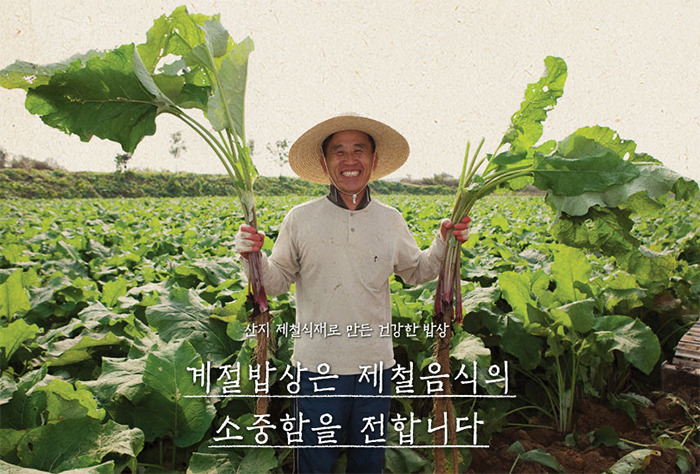 ▲ Have you met this person before at Season’s Table'? He is the farmer Kim Dong-Woo!

A smiling farmer with burdock against the backdrop of a green wave in a picture that you first come across at CJ Season’s Table restaurants and website is farmer Kim Dong-Woo at “Lotus Village.”

Kim Dong-Woo, who became a messenger who delivers the health of seasonal ingredients of our land as the face of Season’s Table, said that he never expected to become a farmer.

“In the mid-1990s, when I failed in business, my oldest brother advised me to try farming. My family originally worked in the sericultural sector while raising cocoons. My oldest brother was a sericultural specialist and many of my friends were farmers. After pondering for a long time, I decided to go back to this town for faming,” Kim said. 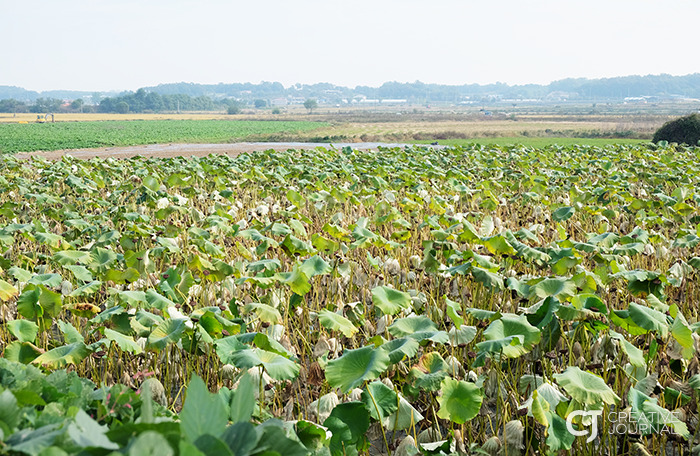 For the first two to three years, Kim used chemical fertilizers, herbicides, and other pesticides just like other farmers. But one day when Kim saw a spray of herbicides kill off weeds which he tried to pull up with his hands, he thought that the method was not quite right.

“Is this a proper and natural method? Of course not,” Kim thought. “In particular, lotus roots are a root plant, which made me worry about residual pesticides. Pesticides on leaves can be washed off when it rains but pesticides absorbed into the ground infiltrate into their roots.”. 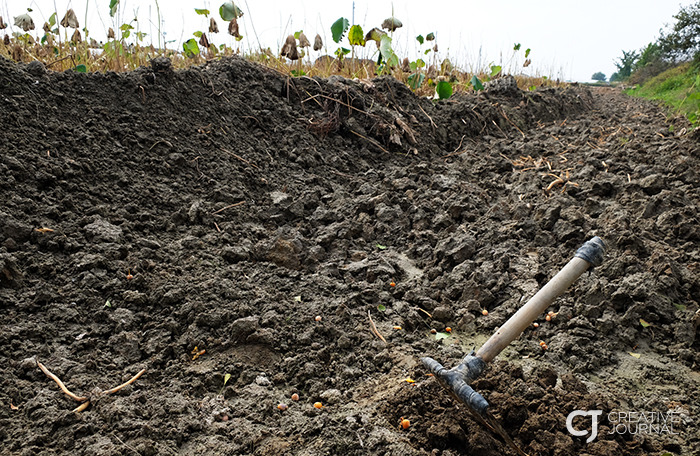 ▲ The lotus roots are picked up with a pickaxe

Kim tried various farming methods that did not resort to using chemical fertilizers and pesticides and devoted himself to nurturing environmentally-friendly agricultural products. As luck would have it, the Life Cooperative and Hansalim selling eco-friendly farming products among others started to buy lotus roots from Lotus Village. They also began to be supplied as a food ingredient for eco-friendly school meals.

“I have used a pond snail farming method to clear weeds by putting pond snails into lotus root field, and boosted the power of soil by using manure instead of chemical fertilizers,” Kim said. Three years after sowing lotus seeds, the field becomes fertile. Lotus roots formed deep under the ground and lotus leaves and branches played the roles of natural fertilizers.

“I think it is a job of farmers to watch for and help nature grow its crops well during that time by using patience. We can farm faster and make crops bigger with chemical fertilizers and pesticides, but that is against the natural order,” Kim added.

Various Ways to Enjoy Lotus Roots while Searching for Taste, Nutrition and Pleasure Kim has made efforts to bring the power of our agricultural products to his homeland while cultivating lotus roots via environmentally-friendly farming methods. He centered on a value of CJ Season’s Table which conveys the importance of seasonal ingredients via tastes and began to supply Lotus Village’s eco-friendly lotus roots to Season’s Table restaurants in the autumn of 2013.

“When I see a photo with my face on the entrance to a Season’s Table restaurant, I feel a little bit shy and awkward. But when I see customers who enjoy delicious food made with eco-friendly lotus roots cultivated by our Lotus Village Agricultural Cooperative, once in a while, suddenly, I want to strike up a conversation with some of them,” Kim said.

“I am curious about how they enjoyed lotus roots that I grew. I also want to tell them how I grew them, when I harvested them and what kind of mindset I had when I grew them. Lotus Village’s connection with Season’s Table is a precious memory to me.” 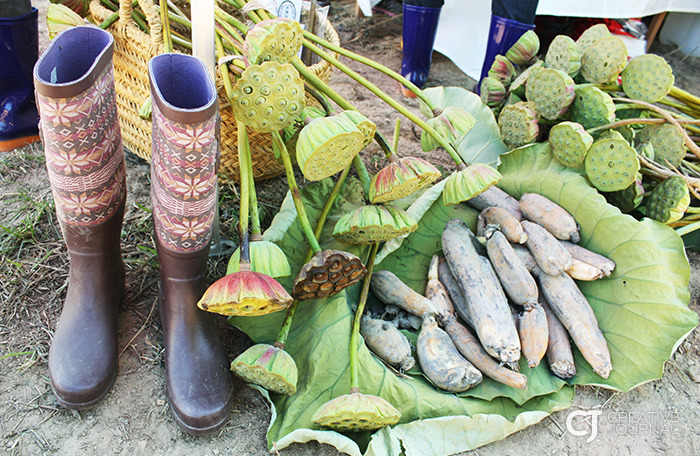 ▲ Not only children but also parents feel awesome about properly grown lotus roots!

Lotus Village is also popular as a destination of a farming experience course for Season’s Table customers. Some parents who came to the village with their children enjoyed picking lotus roots even more than their children did. Kim realized how rewarding his life was as a farmer while watching them pick lotus roots and walking around the farm.

“It would be better to eat eco-friendly lotus roots which absorbed the energy of our land. It is very sad to see consumers choose Chinese lotus roots because they are low priced or it is easy to clean them. “ 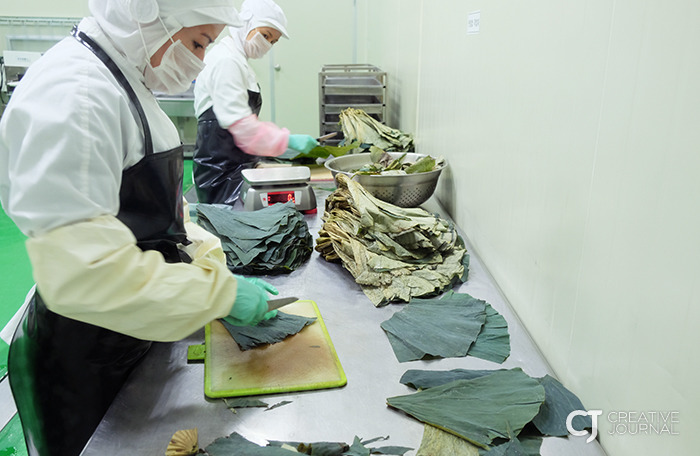 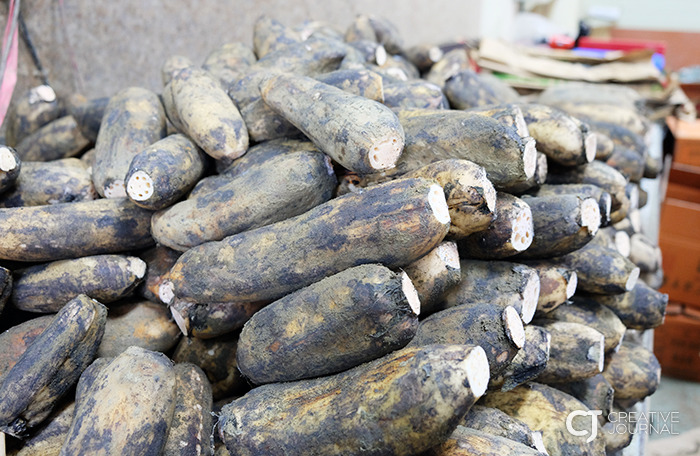 ▲ Fresh lotus roots cultivated with sincerity, how can more people enjoy them?

“We are now producing a variety of processed foods using lotus roots. But we would like to make everyday goods and beauty products loaded with lotus roots and lotus leaves in the future.” 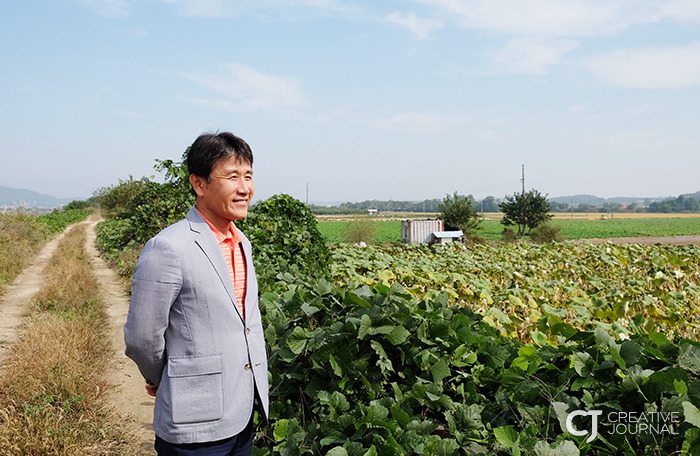 ▲ Farmer Kim Dong-Woo who pursues the value of simple land

About 20 years ago, Kim harvested a large volume of burdocks and received many calls to order them. It was early autumn when Kim was close to harvesting fully-grown burdocks on land of approximately 30,000 pyeong.

Lotus Village was hit by an unexpected flood in the southern part of Gyeonggi Province and Chungcheong Province. The rough water swept away all burdocks from the land. There just remained a muddy field.

“Looking at the field where nothing was left, I said to myself ‘I've been so greedy!’” Kim said. “I regretted it a lot. Since then, I have not farmed to earn more money. I did not make excessive profits when burdock prices soared and a drop in prices of burdocks did not bother me.”

“I decided to pay attention to how healthy our crops were. I made up my mind to live like crops which not overgrow but grow steadily and silently,” Kim said.

Kim’s smile was slow but retains the simple value of nature. Kim’s life touches people through land where he and his family live and work and a pure passion to convey the power and value of the land to more people through farming products cultivated by them. Farmer Kim’s life made a strong impression which resembles a sweet lotus flower.

Next
An interview with CJ Foodville Menu R&D Developers