In July of 2011, CNN reported a study in a critical manner. It was a long-term follow-up study whose aim is to change a boy who was strongly feminine into a masculine boy through training. With this as a motif, the musical "Experimental Boy," a story about an unusual boy, was born.

CJ Cultural Foundation Creative Minds' pick, "Experimental Boy" is a work made through a collaborative effort between artist Lee Eun-Young and composer Choi Dae-Myung. Today, we will take you to a lively reading performance of the musical.

What is Creative Minds?

Creative Minds is CJ Culture Foundation's program designed to support emerging performance creators. We have been discovering and fostering emerging creators working in various performance genres, including musicals, plays, and choreodramas. Through this, we support the development of creative performance content that can be enjoyed by a wide range of audiences and, in turn, contribute to creating a healthy performance ecosystem. 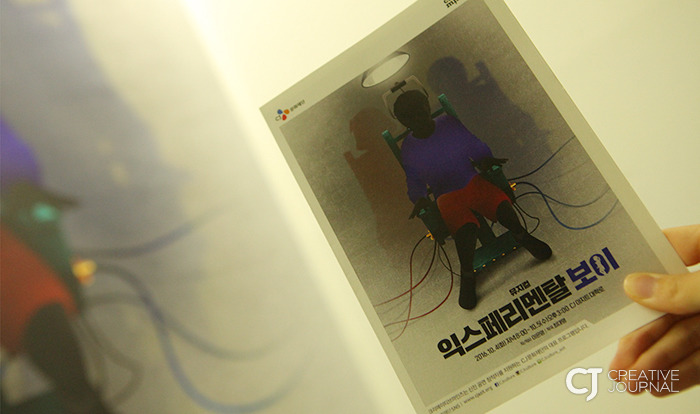 ▲ A story of ordinary yet not-so-ordinary people

The poster for the musical "Experimental Boy," which played at CJ Azit Daehangno. Is it because the musical is a story about ordinary yet not-so-ordinary people? The electric shock chair of the boy in the center of the poster creates a sense of tension. What secrets are hidden in the heart of this boy? ▲ The atmosphere becomes tense as the actors start rehearsing before their reading performance.

The performance began, and a total of five actors showed up on stage. They are the main characters of the musical "Experimental Boy”. Some tension can be sensed from the faces of the actors, who are soon to commence their reading performances. Also, the expectations of the audience that filled up CJ Azit Daehangno are immediately palpable. It is clearly evident that they are musical lovers. ▲ What happens on the night of the 30th birthday of a man who has been living an experiment-like life.

Musical "Experimental Boy" got its motif from "The Sissy Boy Experiment," a long-term follow-up study conducted at UCLA in the United States to change a boy who was strongly feminine into a masculine boy through training. The musical tells a story of what happens on the night of the 30th birthday of a man who has been living an experiment-like life. 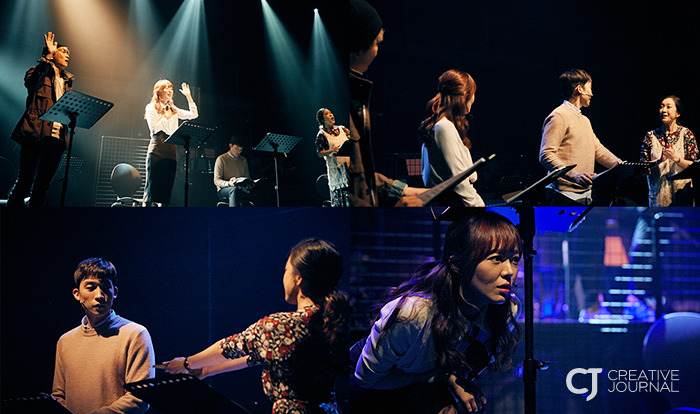 ▲ Secrets hidden in the minds of ordinary-seeming people

The story begins with ordinary-seeming yet not-so-ordinary characters appearing on stage. The setting is a conservative middle-class household in Texas in America. At a party celebrating protagonist Kevin's 30th birthday, a total of five people has shown up, including Kevin himself, Dr. Rickers, a psychologist who treated him in the past, Mark, his older brother, Kate, his mother, and Mary, his younger sister. ▲ Conflict arises between family members as some members want to treat Kevin’s homosexuality as an illness.

Although appearing to be ordinary, they all keep a unique, unusual secret. As a kid, Kevin was taken to Dr. Rickers by his mother because she thought his homosexuality should be cured. Following that day, Kevin went on to participate in a project that aimed to change a boy with a strong femininity into a masculine boy and has since been living an experiment-like life. The five characters come into conflict with each other by centering on the issue of Kevin's presumed illness and go back and forth from their memories of the past. The people around Kevin think he has been cured. The lyrics to the number "Pygmalion," sung jointly by Mark and Kevin, were particularly impressive. 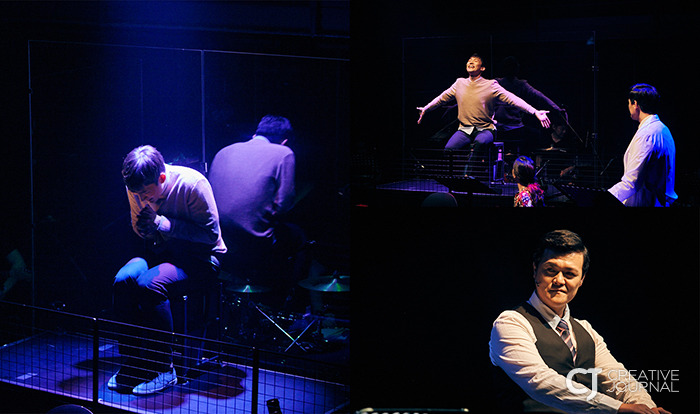 ▲ Finally time for confession. Will Kevin overcome his painful past?

On his birthday, Kevin makes up his mind to confess that he cannot change the way he is no matter how hard he tries. His sincere feelings were delivered to the audience through the number "I Must Tell It Today."

Meanwhile, also revealed is the past of Dr. Rickers, who conducted an experiment on a young boy with an electric shock chair in order to treat the boy's "illness." As Kevin and Dr. Rickers sing a duet of the number "Electric Shock Chair," CJ Azit Daehangno becomes imbued with tension and suspense. 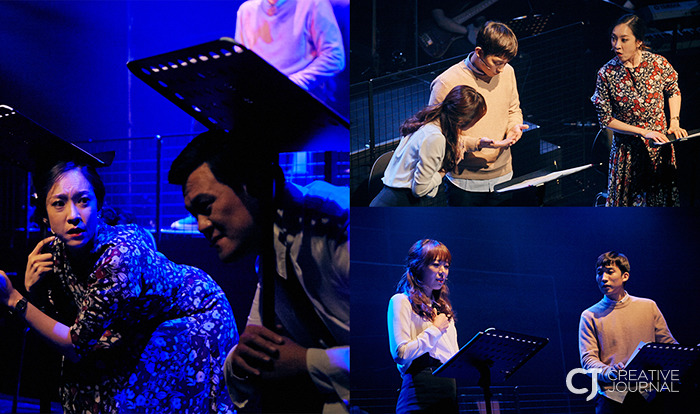 As the musical progresses, past events that happened between the five characters centering on Kevin and Kevin's treatment processes come together like pieces of a puzzle. Their secrets and honest feelings unfold one by one in the form of a psychological drama. The mother, "Kate," spills her heart out through the number "Here Without You." 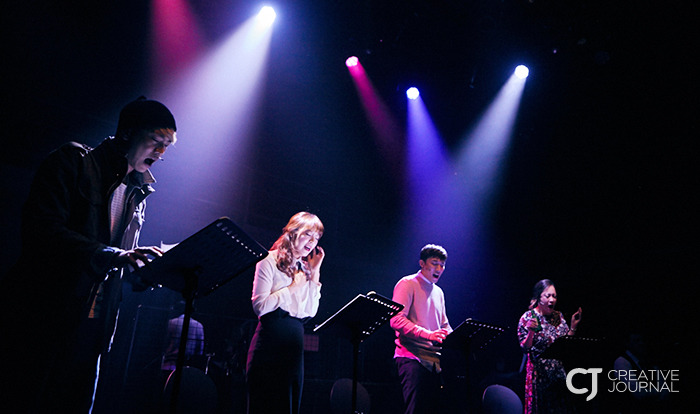 ▲ Characters in the musical "Experimental Boy" passionately sing "Because We Are Family".

From "Because We Are Family", a number sung together by all family members, to "A Certain Story", where you can hear the voices of all characters of the musical! As the actors' explosive performances blend with wonderful harmonies, the audience becomes more and more immersed in the musical, and the suspenseful plot makes the musical even livelier. 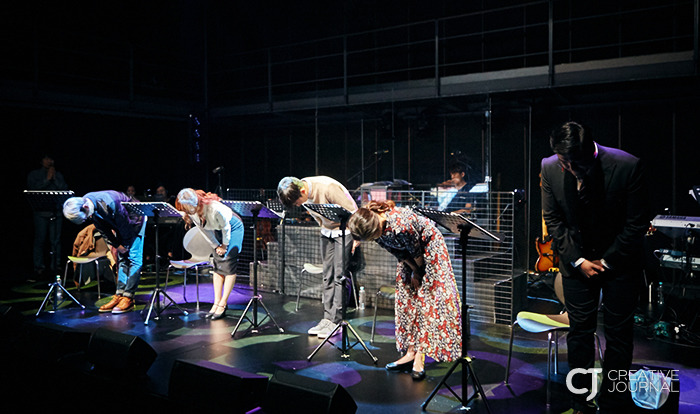 After being selected by 2016 Creative Minds, the musical "Experimental Boy" went on to be put on the stage at CJ Azit Daehangno, with art director Cho Young-Shin as its director. The musical became a whole piece of work after a great deal of effort was made by staff members including music director Chae Han-Wul and assistant director Park Seo-Jin.

And it would be unfair not to mention the five actors who excellently lead the musical. Lee Sang-Yi who plays the protagonist Kevin, Hong Ryun-Hui who plays Kate, Yoon Seok-Won who plays Dr. Rickers, Go Sang-Ho who plays Mark, and Choi Mi-So who plays Mary. They delivered the charm of the musical "Experimental Boy" in a lively manner with excellent dialogue and gripping songs. 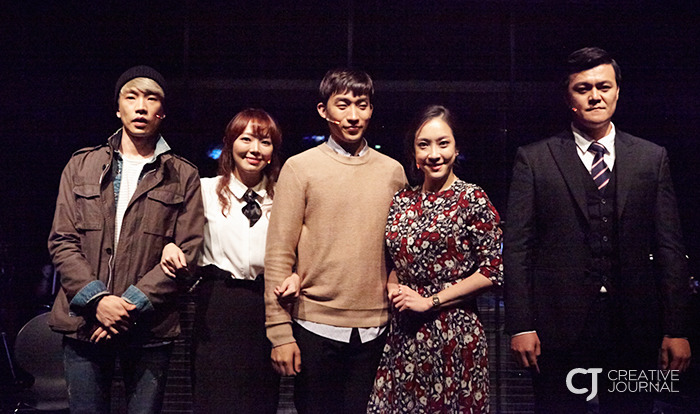 ▲ Actors who did their utmost to portray their charming roles

The audience gave a hearty round of applause to the five actors who performed passionately for an exciting 90 minutes. Some audience members even showed tears of sympathy watching the protagonist's heart-rending life story. The passionate performances of the actors made the creative musical even more charming. We would like to give one more round of applause to the actors who played their charming roles in such an excellent manner. In addition, we spotted the musical's writer and composer hanging around the venue in a tense yet excited mood. Writer Lee Eun-Young remarked, "I am honored and grateful for having been able to prepare and evolve this play through this good opportunity." Then, let's hear from the writer herself, who is listening attentively to the audience's reaction.

“I am excited but also a bit scared about what the audience will think of the show. I'd like to thank the audience for coming all the way to watch the show and hope that the show will prove to exhibit some nice potential.”

The musical's composer Choi Dae-Myung also expressed his concerns before the start of the show. He said that he felt like a sinner because it seemed like he put a lot of burden on the actors, the music director, and the musicians of the show. He also thanked those involved in the show for their constant effort and passion to make a good piece of work.

Previous
DIA Festival and CJ Donors Camp have come together