Look back into the 17-year history of the K-Pop 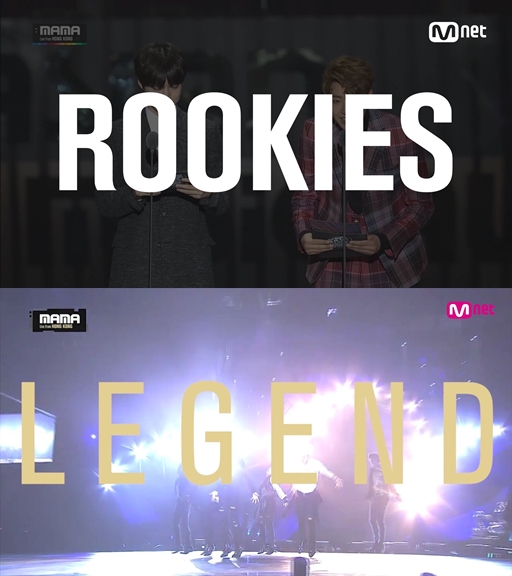 Look back into the 17-year history of the K-Pop industry with MAMA! Videos of rookies and legends are drawing all the attention!

Eye-catching videos of rookies and legends at MAMA have been released, giving viewers a look back into the history of the K-Pop industry.

Entering its eighth year, MAMA is Asia’s most prestigious music awards where people become one through music, hosted by the world’s leading content company CJ E&M.

The awards have constantly evolved for the last ten years alongside the growth of Korea’s music industry, dating from 1999’s Mnet Video Music Awards, through 2006’s Mnet KM Music Festival (MKMF), and into its current international form, MAMA in 2009. Having extended beyond being a mere year-end music awards event, MAMA is now one of the world’s largest music festivals being enjoyed by people all over the world and serves as a global communication outlet as well as a platform to promote Asian pop music. The released MAMA rookie video shows Best Newcomer winners from 1999 to 2015, and the Legend video shows those who won the Grand Award during the same time period.

In the Rookie video, you can see the Best Newcomer winners receiving the award, from 1999’s Lee Jung-Hyun to 2015’s male winners iKON and female winners TWICE. It is indeed captivating to watch freshly debuted, younger versions of artists who now represent various genres of K-pop, including Chakra, BoA, Sung Si-Kyung, Wax, Maya, TVXQ, SS501, Wonder Girls, 2NE1, and Miss A. A Best Newcomer is a precious award you can win only once in your life, the scenes of the artists receiving the award are particularly noteworthy. (Visit http://tvcast.naver.com/v/1218440)

In other news, the 2016 MAMA online poll which began on Friday, October 28th is garnering a lot of attention, having accumulated over 17 million votes so far. The online poll will be open until Thursday, December 1st, 2016, 12 a.m. You can cast your vote, one vote a day, at the 2016 MAMA’s official website 2016mama.com on your PC as well as on your mobile.

The coming 2016 Mnet Asian Music Awards (MAMA), which is to be held at the AsiaWorld-Expo (AWE) in Hong Kong on Friday, December 2, 2016, aims to transform itself into a field of communication that bridges artists, global music fans, and creators based on the concept of “connection”. A new space that connects technology with emotion and virtuality with reality will be created on the main stage which will host awards ceremonies and performances. The awards ceremonies and performances happening on the stage will be truly ingenious ones that can only be pulled off by MAMA and will make for a grand finale to the year 2016.