- Tournament scheduled for 3rd week of October…Total purse of $9.25 million
- Innovative investment to revitalize Korean men’s golf…Providing opportunities for Korean players to compete at world class level
- Expectation of having influences on related business and the host city, developing a stronger sports-entertainment platform to spread K-Culture On October 24, CJ held an agreement ceremony with PGA Tour at CJ Human Resources Center in Seoul and announced a 10-year agreement of hosting a PGA Tour tournament in Korea, which will take place from 2017 to 2026.

The official name of the tournament is ‘THE CJ CUP @ NINE BRIDGES,’ and the venue is expected to be either Jeju Nine Bridges or Yeoju Haesley Nine Bridges, which belong to CJ ownership. The total purse is $9.25 million, and it boasts one of the largest prize pools compared to other PGA Tour tournaments. 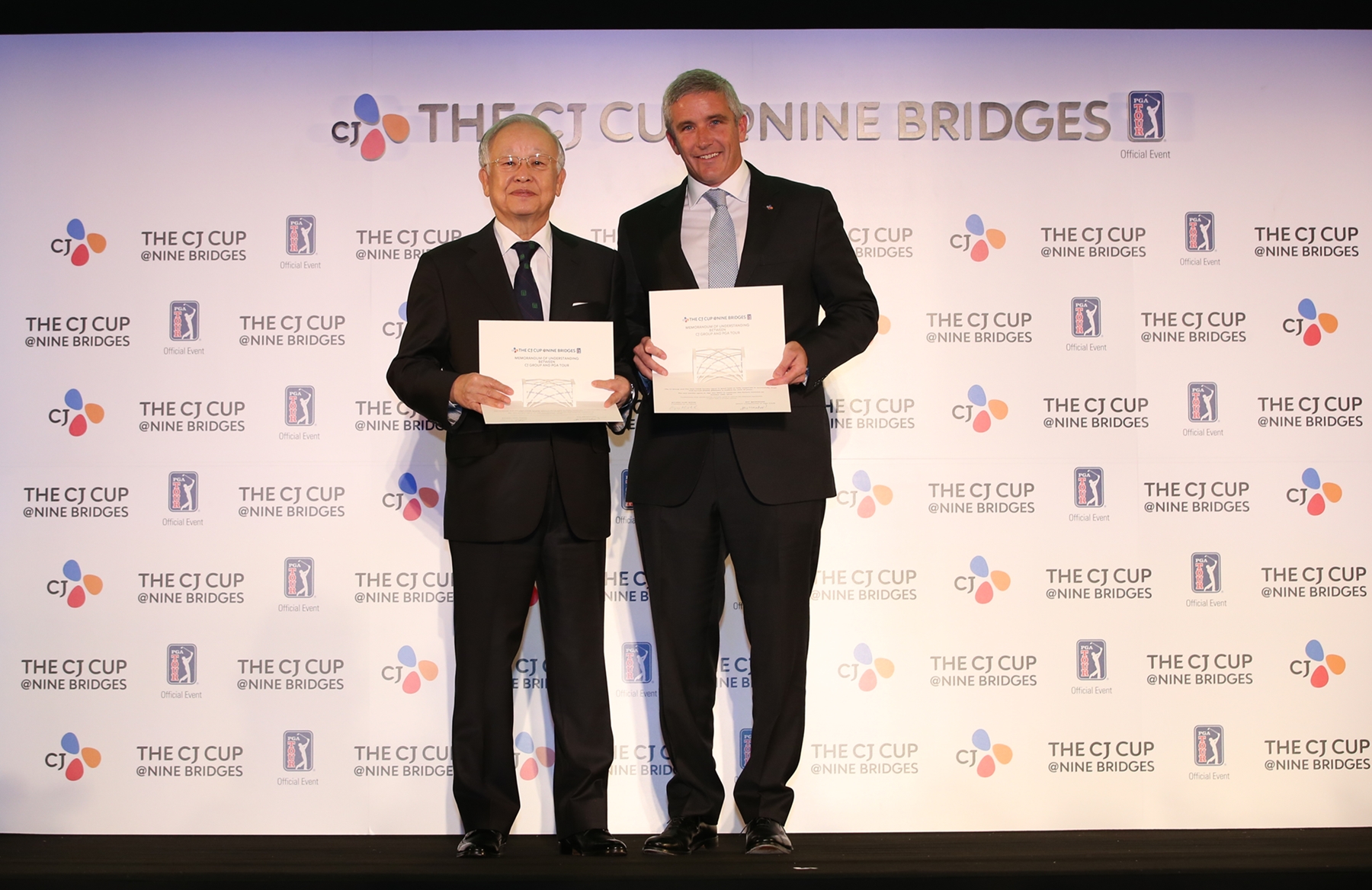 Total of 78 players including 60 players form PGA Tour FedEx Cup point standings will take part in the tournament and CJ is currently discussing with PGA Tour to secure at least 10 spots for Korean players. As a no-cut event, Korean players will be given opportunities to play against world class players all rounds.

Regarding the first PGA Tour tournament, a CJ associate said “THE CJ CUP @ NINE BRIDGES’ will be a new field of opportunities that will help young Korean prospects of realizing their dreams and CJ will continue to devote in order to reinvigorate related industries and regional economic growth.” 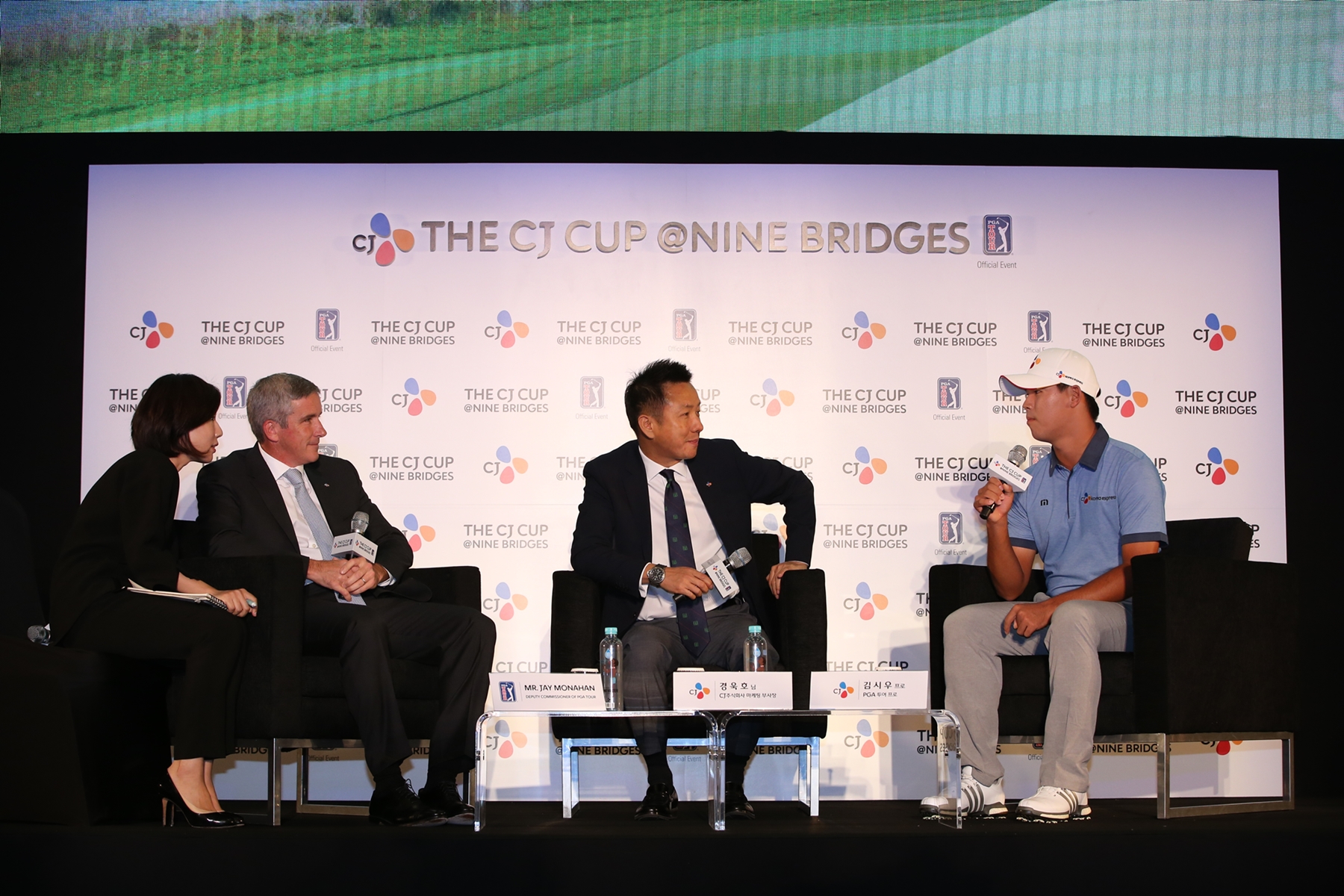 As of now, Siwoo Kim (21, CJ Korea Express) is the only Korean player in Top 60 on FedEx Cup Ranking. Therefore, CJ will secure as many spot as possible to guarantee participation of other Korean players.

Since 2002, CJ had hosted ‘CJ Nine Bridges Classic’ for four years, which was the first LPGA tournament held in Korea. CJ was highly acclaimed for playing a significant role on improving Korean women’s golf, which is now recognized as world’s golf powerhouse

The tournament is also expected to enhance Korea’s national brand values and economical growth. As PGA Tour is scheduled to be broadcasted in 220 countries, regional touristic landmark and cultural heritage including golf course will also be exposed to worldwide fans. PGA Tour is predicting that the total values of economical ripple effect, media exposure will reach around 200 million US dollars. In addition, the economical growth is also expected as there will be tens of thousands of tourists visiting the host city, consuming in accommodation, food and shopping, etc.

In long-term plan, CJ is planning to develop ‘THE CJ CUP @ NINE BRIDGES’ into a world-scale sports and culture platform. “Along with the tournament, we will host a convention for local golf-related small businesses and provide opportunities to reach and enter global market. In addition, Korean food and culture experiencing programs will be prepared to contribute in spreading K-culture globally” said CJ Group.