An interview with Jung Woo-Sung, mechanic

The world of racing mechanics! An interview with Jung Woo-Sung, mechanic from CheilJedang Racing Team at CJ Super Race Championship

2007 was the year when CJ Super Race Championship, Korea's major car race, was launched. In the same year, the best team of the Super Race, CJ Racing Team, was launched. 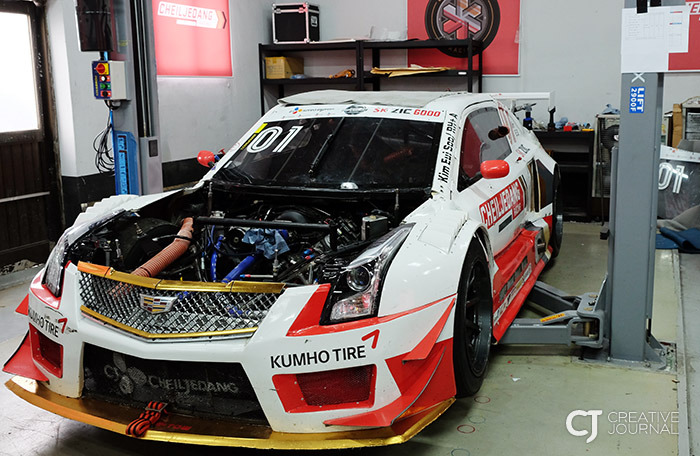 A stock car is a racing car equipped with a super race engine that boasts an exhaust capacity of 450 horsepower and 6,200 cc of 8 cylinders in the appearance of a mass-produced car. The stock car is prepped and showcased for SK ZIC 6000, the representative race of the CJ Super Race Championship.

It features a monster-like power of up to 300 kilometers per hour. The exterior looks very much like a regular car (Cadillac ATS-V), but the interior is very different. Because the weight of the vehicle is connected to its racing record, the passenger seat is removed to ensure a light weight. To protect the driver from overturning or crashing, the driver's seat is encased by a roll cage.

The vehicle features a separate vent to lower the interior temperature, which goes up to 50°C during a race, and the engine room uniquely designed to cool the heat of the large engine. The rear exhaust system makes a thundering sound with a flame called "after-firing".

In each round, a stock car runs about 1,000 km while enduring extreme conditions. That is why the stock car is disassembled, repaired and re-assembled after each race.

A mechanic is busy because the entire process to make the best performance depends on their hands.

Mechanics who make racing, the art of teamwork 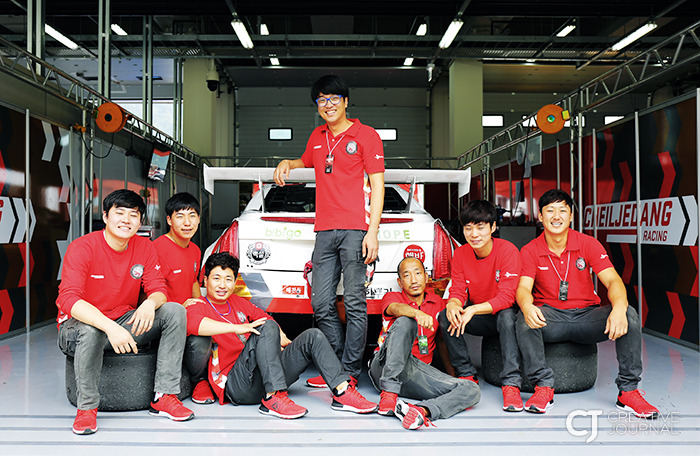 A race car on the racing circuit cannot perform well by itself. It needs mechanics, who maintain the car in an optimal condition, improve it to perform better, and diagnose and repair problems if any.

There should also be an engineer who studies and suggests the technical improvements of the race car based on the race results. And the driver who possesses good physical strength, the ability to react instantly, and concentration and boldness, sitting in the driver's seat, controls the car.

There are also a manager and a director who coordinate the team by handling work related to race participation and team operations. Like many other sports, car racing is also the art of teamwork. 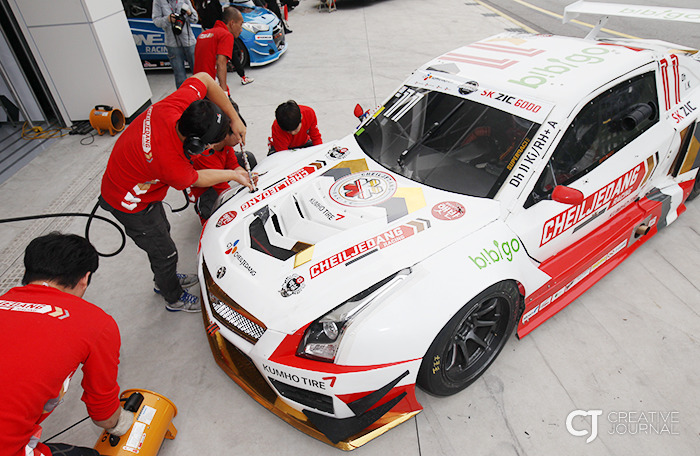 ▲ The race requires dexterity and teamwork.

A pit is a place where a racing car is stored. Here, the space reserved for each team in the circuit, a mechanic does all the work necessary to maintain and manage the race cars. A mechanic is usually understood as a repairer, but in motorsports, a mechanic is closer to a doctor. They are like a team doctor in a soccer game.

Mechanics from the pit are watching the engine room and the bottom section of the race car running on the circuit. Just like a doctor who detects the degree of pain from only the complexion of their patient, mechanics can detect the condition of the car only by watching the car running.

The vehicle that enters a pit after a race is exhausted and sometimes coughs up oil in the same way that a wounded patient coughs up blood. The hands of mechanics who takes care of the exhausted car and returns it to the best condition are more dexterous than those of doctors and as warm as that of pediatricians.

Communication skills, understanding of machines and... 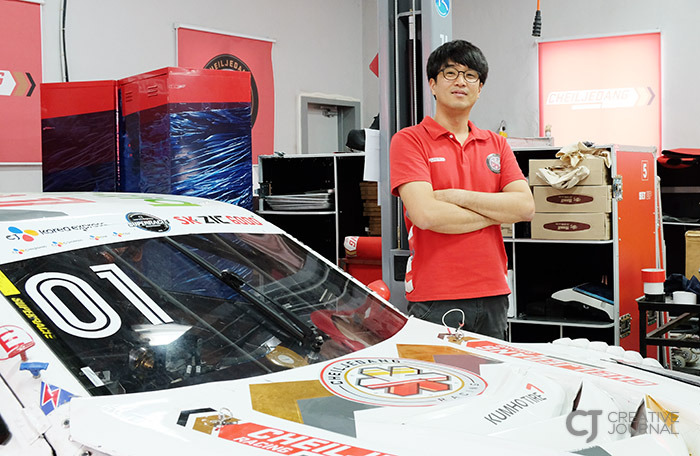 ▲ The CheilJedang Racing Team Camp and the stock car and mechanic Jung Woo-Sung! They all share one common dream!

The team has an exclusive mechanic for each car and a chief mechanic, who oversees the work of all these mechanics.

And mechanic Jung Woo-Sung is the chief mechanic of the team. It’s been 19 years since he started out as a race car mechanic. Having keen interests in cars and motorsports, he sought out and joined a racing team, and soon became a mechanic.

"Unlike when I began my career as a mechanic, these days there are many young mechanics who had already dreamed of becoming a mechanic in childhood or studied car maintenance at a college or vocational school. Teams also recruit mechanics by posting ads on recruiting sites.

There are many car races including CJ Super Race Championship as well as many professional and amateur racing teams, and the awareness of mechanics seems to have broadened as well." ▲ The first requirement for a good mechanic is communication.

Jung says that the first requirement for a good mechanic is communication. A good race requires efficient interactions among the three key roles of racing: driver, mechanic and engineer.

In addition to this, it is his responsibility to coordinate tight schedules and budgets with the team's staff. One may come up with dreamy images of mechanics depicted in films or television series but a day of mechanics is filled with more realistic and complex tasks.

"This job requires more mechanical understanding and knowledge than car maintenance. The stock cars handled by race car mechanics have a very different structure from that of regular cars. The race car is a delicate machine; a slight difference in weight, angle and temperature will change the result of racing.

Due to this delicate nature of the work, beginners have to learn a lot about the job by working with senior mechanics in the field. They have no choice but to experience real situations to learn the job because all the conditions comprising a race vary, ranging from race circumstances to circuit conditions, driver ability, physical conditions, vehicle history, etc.

As the Korean motorsports market is smaller than those in Europe or the US, it is still less specialized and a heavier workload is given to mechanics as a result. Usually, one 2-day race takes place each month. During the remaining 28 days, the two stock cars are disassembled, repaired and re-assembled to reach the optimal condition.

CJ Super Race Championship is also held in Japan and China. In months when the race is held abroad, the cars are repaired at least two to three weeks before the race and sent to a container. This means that we are completely tied up in work during the period." ▲ The moment of competition at extreme speed! Between thrills and dizziness

Car racing entails many dangerous moments. Bold mechanics and drivers might enjoy such moments, but their family and fans are usually prone to feeling their hearts jolt many times.

"That clothing? (pointing to a white suit hung on the wall) That's made of flame-retardant fibers. Yes. Right. The suit is the same one as a driver's. Pit crew members in a race must wear a fireproof outfit.

They must also take out special insurance as drivers do. Fortunately, Super Race has never seen any fatal accidents, but there were some big accidents that resulted in casualties in foreign racing events. This is why we must always be prepared for accidents."

The miracle on a circuit made by an enthusiasm for racing 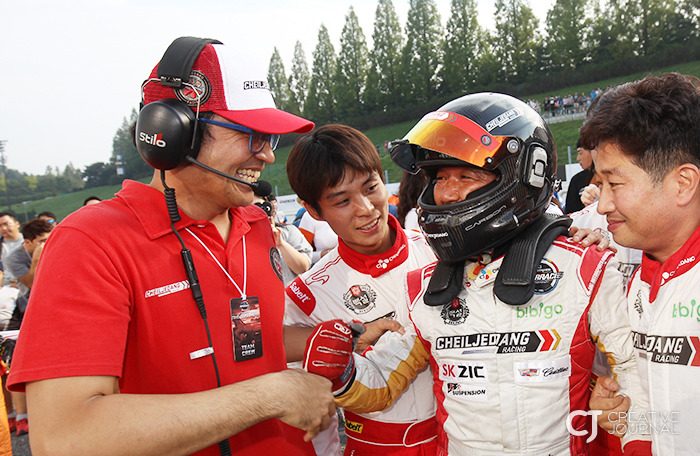 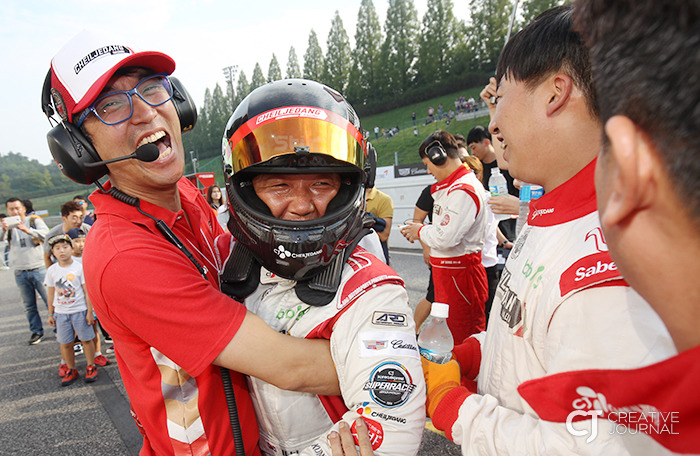 To those who are not familiar with motorsports, mechanics might be regarded as a person behind the scenes. Their attention might be paid only to the drivers who will stand on the podium after a race. The role of mechanics who do their best to repair the vehicle for the race in a pit stop or camp might not be easily noticed.

There are people who breathe a sigh of relief only after the engine of the race car that pounded like the heart of a beast gradually calms down and the driver comes into the pit safely.

Those who grasp for air with their heart beating faster than the engine during the race and who listen carefully to the crying engine of the race car. They are mechanics. But the audience tends to forget about their existence and cheer only for the winner standing on the podium. ▲ “Doing what I really enjoy doing. That's all I want."

People say no job in the world is easy but this job is a really tough one. The reality has not changed much from 20 years ago when Jung started his career as a mechanic.

The motorsports market is growing very slowly. Many young people who followed their dream eventually give up on it, overwhelmed by the mighty wall of harsh reality. Jung has been sticking to his dream over the past 20 years and has become the chief mechanic of the nation's best racing team. What helped him to overcome the challenges to live as a mechanic?

"Simply because I like this job. Some people say not to make a hobby you like as an occupation. But I am happy that my occupation is a hobby I like. Although I faced hard times... I am happy when I am with these race cars here.

I feel that my work pays off when the car I take care of runs on a circuit. I want our team to win the championship title and become the world's best racing team. It's not extraordinary but I guess this is all I want. Doing what I enjoy doing. And becoming a champion. That's all I want."

The exposed skin of the stock car was waiting for the hand of mechanics. Unlike the car's monstrous appearance on the circuit, the car in the pit looked very soft and smooth. Jung Woo-Sung, the mechanic who says, 'I just like it because I like it,' stroked the stock car with a laughing smile.