A delectable pleasure created by your own hands! An interview with CJ Foodville Menu R&D Developers: Kim Jung and Seo Jong-Hoon

When you turn on the TV, each channel seems to have its own cooking program. This is truly the era of gourmands! More and more people say they feel happy when they eat delicious food and feel happier when they make it for themselves.

Some people have led this trend behind the scenes. Let's meet with Kim Jung and Seo Jong-Hoon who are in charge of Menu R&D at CJ Foodville.

You might have already watched the CJ Group job introduction video that showed their lives being full of passion and creativity as a menu developer. 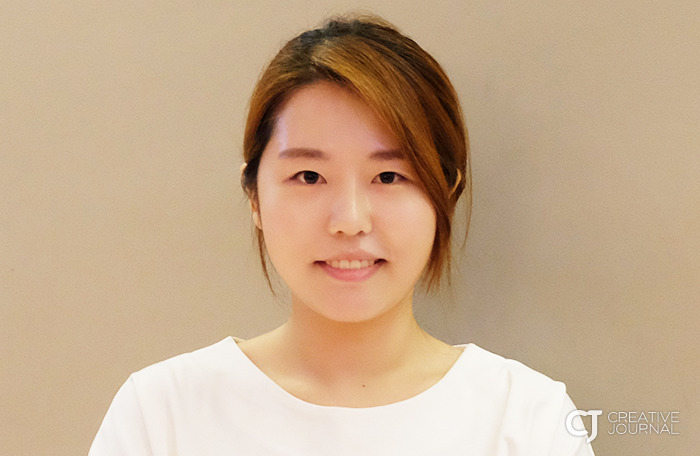 ▲ Kim Jung from CJ Foodville Bakery R&D is full of passion and a love for baked goods.

To Kim, a kitchen is more of a playground than any other place. When she was young, she used to collect cooking and baking utensils with pocket money.

Having enjoyed baking cakes and cookies for her friends and family, she graduated from Korea Culinary Arts Science High School and majored in food service management at university.

Kim Jung: “You can say that I was a bakery nut when I was young. While my friends were all enthralled by idol stars, I was busy discovering new bakery recipes and collecting well-received bakery products.”

Thanks to this, I was able to determine and pursue my career earlier than others. When I asked myself about what I could do the best, it was not hard to come up with an answer."

While she took various kinds of field training programs at high school and university, she realized that she had an aptitude for developing new menus.

The production aspect required a dexterous hand to deliver in time but she was not known for being overly quick with her hands. She was slow but meticulous and she realized that she had an aptitude for developing menus, which requires careful diligence over time.

Most of all, menu R&D requires creativity, which was perfect for Kim who had many things she wanted to do. 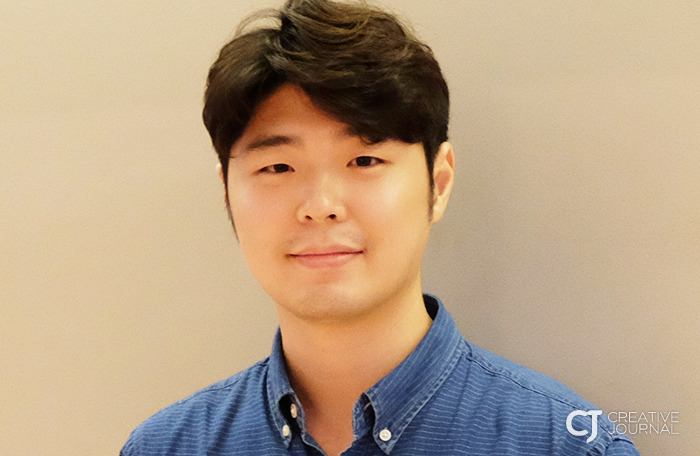 ▲ Seo Jong-Hoon from CJ Foodville Menu R&D Team, who chose the path to cooking in his teens

Seo Jong-Hoon also decided his career early in his adolescence. With a strong yearning for cooking, he went to the US to study about it. In the US, he graduated from the famed CIA (Culinary Institute of America) and finally joined the world of chefs.

After his graduation, Seo started his career as an apprentice chef at a fine dining restaurant in the US. After working in New York, he returned to Korea and uncovered his true aptitude while seeking a job.

He became interested in menu development work through which he could experience everything about food service. He says that he decided to amass the ability to "draw a big picture about dining" while studying trends, developing menus and building systems at a food service company.

Seo Jong-Hoon: "It was a whole new career from a chef working in a kitchen to a menu developer in charge of product development and field training and management. Menu R&D is the core of food service and allows for a variety of experiences. You can learn a lot from this kind of job.

In particular, CJ is a company that encompasses the full gamut of food service, ranging from food ingredient distribution and production to the operation of various brands offering a variety of menu selections from various countries and "concession (premium food court)" business, which has become a global gourmet trend of late."

Kim says that field training is the most precious time that cannot be replaced by anything. So, what has she learned from the field? 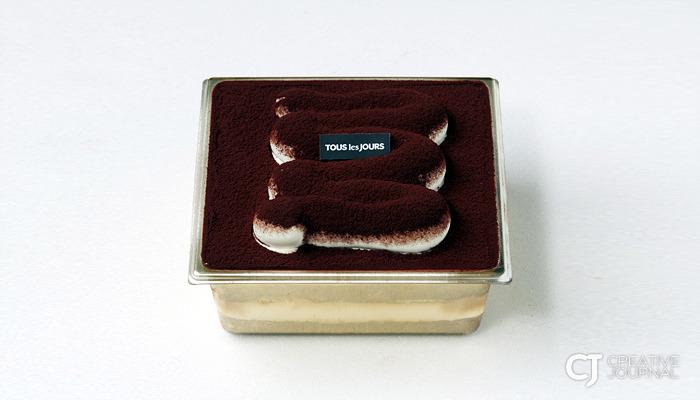 Kim Jung: "Once I develop a cake recipe, I train workers from each store and tweak the recipe together on-site until the quality is upheld. In this process, I felt that the field training I previously received was really helpful.

Sometimes, a recipe is developed easily but once it begins to be produced, unexpected problems are apt to take place. To prevent this, I developed a manual based on the difficulties I had encountered from field training and based on this manual, I check recipes more carefully."

Seo Jong-Hoon: "I attended field training for one year. During the period, I worked at many brand stores, including The Place, VIPS, Season's Table and Cheil Jemyunso, and also experienced production processes at CJ Foodville's Jincheon plant. While working at the locations, I was able to gain a sense of what it really means to work for a food service company.

By experiencing how menu items developed by developers were implemented on-site and how ingredients used at stores were made in the plant, I could build up the ability to develop menu items that are more tailored to the particular site." ▲ A menu offering that is easy to share and developed to meet the needs of office workers. Pork Neck Steak Platter by Seo Jong-Hoon

Kim and Seo always live one season into the future. During the summer, they develop Halloween Day menus for October, and in the fall, they develop strawberry menus for winter. The seasonal menu and the menu for special days should be developed well in advance.

Kim tends to develop 25 to 30 cakes a year, while Seo develops about 20 menu selections per year using seasonal ingredients. These numbers suggest that they must keep themselves very busy.

At the same time, they need to contemplate how to express seasonal ingredients and holidays in the form of new and fresh tastes. Probably every menu developer faces the same challenges. 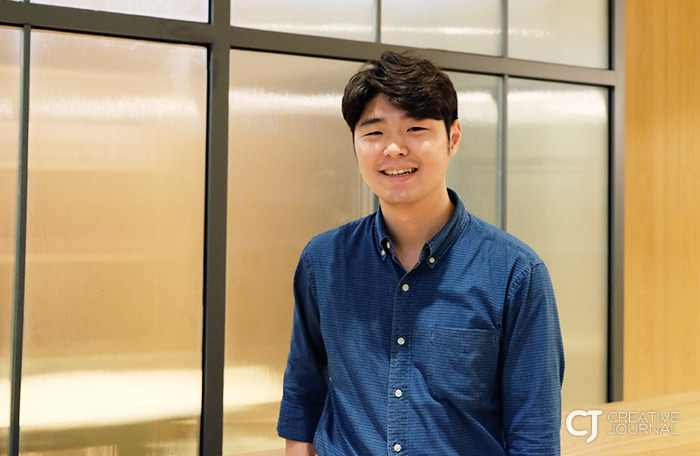 ▲ Seo Jong-Hoon wants to be a menu developer who is good at design.

Seo Jong-hoon: "One menu item is created through evaluations and feedback from so many people. People have their own sense of taste and feedback on the same menu item may tend to vary: some may think it is too sweet, and others may say it is too salty. Menu developers should listen to every opinion and figure out how to improve the item.

When I develop a menu, I try to incorporate various kinds of feedback into the menu, but at the same time, I try to maintain the original plan and concept. This is because I might forget the essence of what I wanted to develop while listening to and heeding various opinions.

So I want to be a menu developer who is creative and good at "design" based on the original plan. To reduce the gap between a creatively inspired recipe and the recipe actually implemented in the kitchen, I must design the menu thoroughly, and I always bear this in mind."

As Seo mentioned, keeping an "open ear" is essential to menu developers to listen to various opinions and flexibly reflect various viewpoints. Menu developers will feel rewarded when they can develop well-designed recipes by reflecting various forms of feedback while sticking to the original concept. 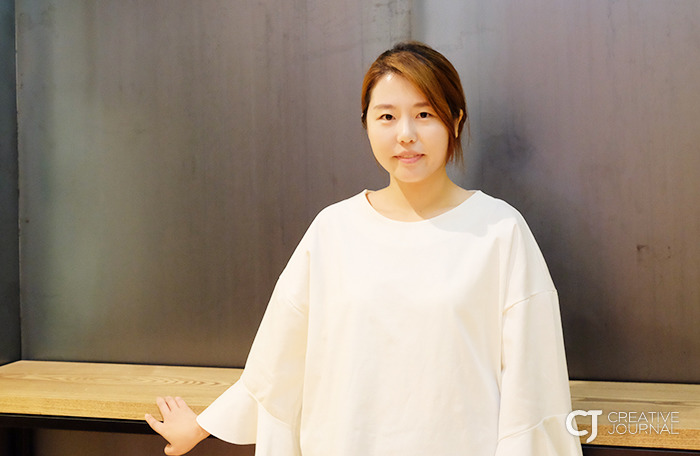 Kim emphasized that menu developers need to maintain their way when developing new menus. She means that menu developers should fundamentally adhere to their original intentions, even though they collect and reflect various opinions from relevant teams. This is also keeping with Seo's rule of sticking to the main concept.

She said that it is important to reflect trends and listen to the feedback from free-sample stands and responses but at the same time, it is also important to evolve the original idea throughout the process.

Kim Jung: "I think the virtue of menu developers is persistence. Persistence can manifest itself as endurance or meticulousness. If an idea comes to mind, you need to develop it until the end.

Don't easily give up on an idea after just a few tests and don't follow a fad. Go all the way with your idea."

No matter how many times I do it, I am still excited with my job. 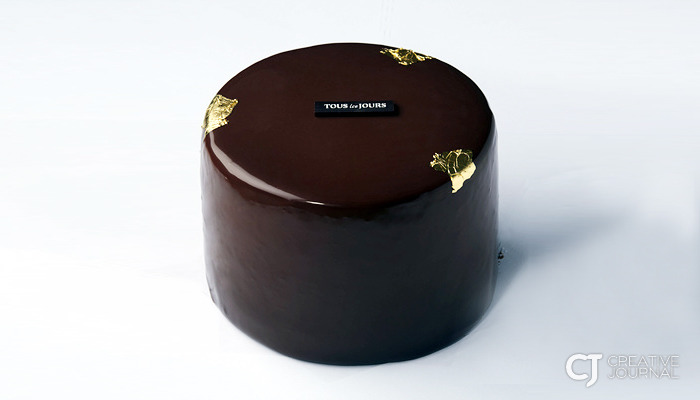 Kim bakes hundreds of cakes in order to perfect a single menu item. According to the results of sampling, she adds or removes some grams of sugar or chocolate or bakes longer or shorter or adjusts the temperature. A menu feature is only created after going through hundreds of attempts.

What Seo Jong-Hoon does is no different. The most important part of menu development is to maintain quality after the launch of the menu. The menu cooked by different chefs at different stores may be slightly different from each other.

To stabilize and uphold quality as soon as possible, it is important to identify any possible problems or differences through numerous trials of cooking before launch. There is also a process of tweaking the recipe according to the characteristics of each store.

She became a menu developer because she was a "cooking fanatic". But doesn't she lose enthusiasm if she makes the same menu tens of times a day?

Kim Jung: "No. A kitchen is still the most exciting place to me. When I enter the kitchen, I begin to think of things like, 'What is today's menu?', 'I should add this ingredient to the recipe I made yesterday.'

Some say it would be tough to cook the same menu hundreds of times. But a smile on the faces of customers who tasted the new menu make me forget all the tough moments."

Kim and Seo say they feel their heart skips a beat when they find any menu feature they developed on Instagram or Facebook. They also said they frequently search for their menu features through hashtags. They are so pleased when they receive positive feedback such as "Delicious!" or "Looks amazing!" and they try to meticulously root our problems if they receive any negative feedback. 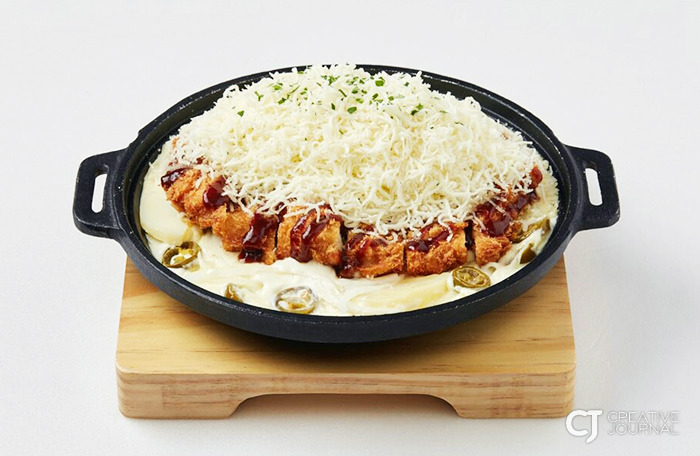 Sensing a trend is important especially in times when a single hit menu item can lead the entire brand.

Seo Jong-Hoon: "Sometimes one hit menu item can propel the success of the entire brand. This is especially true for consumers who are sensitive to nice and trendy restaurants and hit menu features.

I want to develop hit menu items that are able to touch the emotions of customers. I think that product R&D is the core process in making hit products in the food service industry. This is why I feel responsible and rewarded as a menu developer." 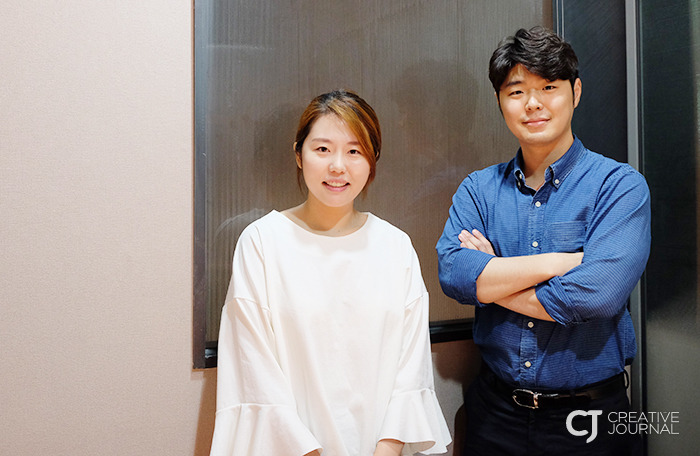 Lastly, we asked Kim and Seo about the most important ability required of menu developers.

They share the same opinion that a developer who is both physically and mentally healthy can develop good recipes. That is why they always study trends with a curious mindset and sample savory menu items with a good appetite.

Seo and Kim are perfect examples of healthy menu developers who love to work in the kitchen. As they love and feel excited about their job, the kitchen is always their most exciting playground.

Next
Interview with MD Jin Hye-Young from O’live Young