Healthy dieting comes from good fat! Getting the most out of CJ CheilJedang's Coconut Oil, Olive Oil and Lignan Sesame Oil for a "low carb high fat" diet

The documentary [Misunderstandings about Fat] recently aired on MBC is creating a big sensation. The documentary was aimed to clear up misunderstandings about fat by introducing the Low Carb High Fat (LCHF) diet that defies the existing common sense by recommending one to eat butter, meats and eggs freely. Let’s take a closer look to see how eating fat is associated with healthy diet. 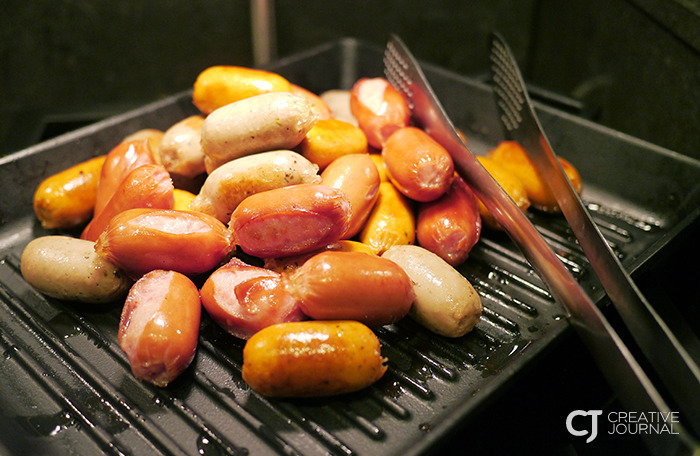 This documentary revealed some surprising findings, including the effect of flattening the stomach by eating animal fat and meats, which are usually thought to do harm to one’s health. In addition, it made viewers realize how much they depend on sugar and carbohydrates in their dietary life.

As the documentary repeatedly emphasized, it is not true that it tells us to eat butter or meat without any limit. Instead, it argues that we need to first check out the ingredients of food to be aware of what we eat and dispel the stereotype that fat is bad.

Fat is one of the three main nutrients, along with carbohydrates and protein. Fat forms cell membranes and vitalizes human metabolism as materials for hormones, and also plays a crucial role in maintaining body temperature.

Polyunsaturated fatty acids such as Omega-3 fatty acids reduce blood cholesterol. In addition, fat helps absorb fat-soluble vitamins such as vitamin A, D and E as it protects organs.

Most of all, fat improves the taste of food. Absorption of nutrients is also enhanced when food is stir-fried with oil rather than boiled or steamed. As revealed in the documentary, many study results show that unsaturated fatty acids make one feel full and satisfied.

How to ensure you are consuming the right amount of smart and wholesome fat? The best way to ensure that you are getting the right amount of fat is to consume it in a healthy way in your daily dietary life. There are good fats and bad fats, and it is also important to tell the difference between them.

One example of bad fat is trans fat. The trans fat used in processed food whose main ingredient is fat, such as fried snacks, donuts and French fries, is made by solidifying liquid vegetable fat. It does harm to the heart and blood vessels and aggravates inflammation inside the body.

Would not it be better if we could bring back the wisdom of ancestors who used such good fats for a variety of dishes in our lives today? 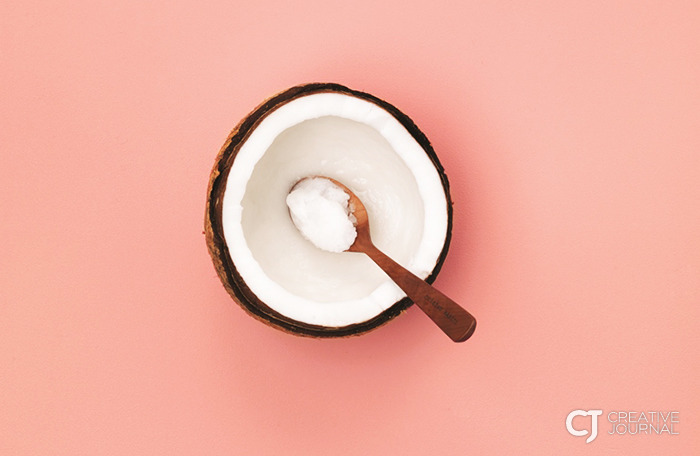 As coconut oil extracted from coconuts has various uses, ranging from food to cosmetics, it is widely loved by many dieters. Coconut oil is already recognized as a "health oil" in many countries, including the US, Europe and Japan.

Because of this, if you replace your cooking fat with coconut oil, you can expect the improved effect of burning off body fat and feeling full and satisfied.

▲ The "omnipotent" oil which you can eat and apply! CJ Real Coconut Oil

Even though it’s good for you, finding coconut oil has never been easy. Now, you can buy it easily, thanks to CJ CheilJedang’s launch of CJ Real Coconut Oil. This new product was developed in collaboration with La Tourangelle, a French premium oil brand.

To satisfy both customers who like the unique fragrance of coconut oil and those who dislike it, CJ Real Coconut Oil was released in two types: "Plain" type with no fragrance and "Coconut" that retains the original fragrance of coconut. You can choose one of them depending on your preference and intended use. 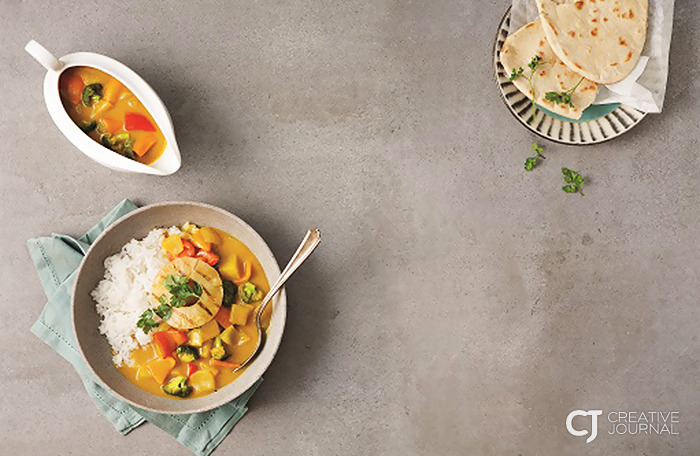 ▲ The authentic taste of Thailand! Coconut Curry made from coconut oil

Use coconut oil as a cooking oil or an alternative to butter; coconut oil is a solid or liquid depending on the storage temperature. It is also good to consume coconut oil as it is for maximizing the effects of a beauty diet. As coconut oil has excellent hydration and absorption power, it can also be used to nourish your skin and hair or for massage purposes. Widely used in Europe and Middle East, olive oil is an important basis of diet for people living there. Completing the taste of Western dishes, olive oil plays the same role as garlic in Korean food.

As olive oil contains oleic acid, which is an unsaturated fatty acid, it helps lower the level of bad cholesterol in the body. It is widely known that the Mediterranean diet that consumes olive oil in various ways is effective in improving cardiovascular diseases.

Olive oil is also a good moisturizer. Containing plenty of vitamin E, olive oil can be used on sensitive skin types as well. ▲ Beksul Andalusian Olive Oil from Andalusia, the home of olives.

Beksul Andalusian Olive Oil is made in Spain, the world's largest olive oil producer. Andalusia in Spain, where its olive groves are unfolding everywhere you look, is like the 'home of olives', and olive oil made in Andalusia is famous for its unique sweet and intense taste and fragrance.

Purely extracted, Beksul Andalusian Olive Oil can be used in various dishes, ranging from salads to pastas. Having a low smoke point, olive oil is better to consume without cooking rather than frying or stir-frying.

To taste the unique fragrance and flavor of olive oil, it is best to use it for salad dressing, as a pasta base or for bread dipping. 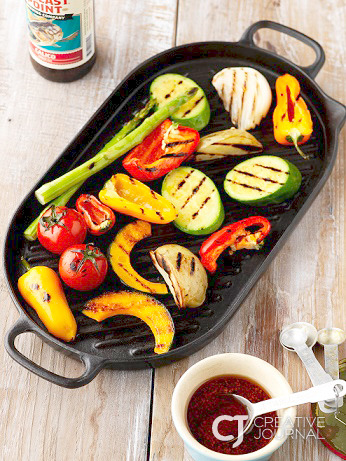 As an ingredient for a finishing touch, sesame oil is indispensable in Korean food. Just try imagining the taste of seasoned vegetables, songpyeon (half-moon-shaped rice cake) and bibimbap if oil was not included. But its taste is not the only thing. Sesame oil also contains plenty of andioxidants.

Recently, people are paying attention to flaxseed as a ‘super food’ as it contains lignans, an antioxidant. Sesame seeds, which we’ve always kept in our dietary life, contains more lignans than flaxseeds.

Lignans are not only good for blood circulation but they also help prevent aging, improve cardiovascular diseases, reduce bad cholesterol, accelerate alcoholysis and prevent and improve loss of memory. 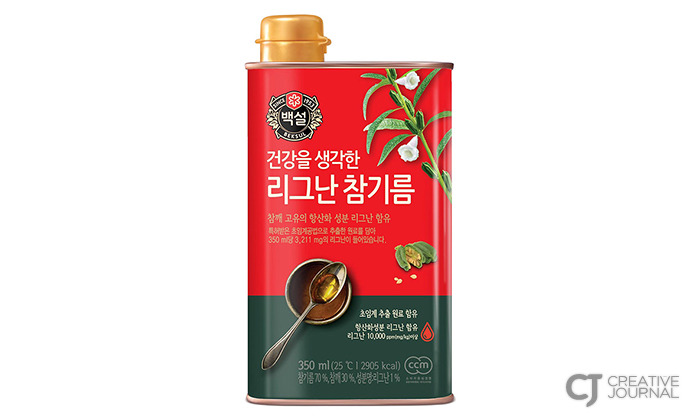 Beksul Lignan Sesame Oil contains more than 10,000ppm (mg/kg) of lignans, an antioxidant contained in sesame seeds. Extracted through a patented supercritical method, the sesame oil boasts of its great flavor and fragrance.

Our ancestors used to eat a fresh egg with a spoonful of sesame oil on an empty stomach in the morning. Today's current dietary trend of oil ingestion is also in line with this practice of our ancestors. It is a good way to ingest lignans contained in sesame oil along with proteins.

Many other Asian dishes including Chinese ones also attain better flavor once adding sesame oil. With Lignan Sesame Oil, you can naturally consume a sufficient amount of anti-oxidating lignans. 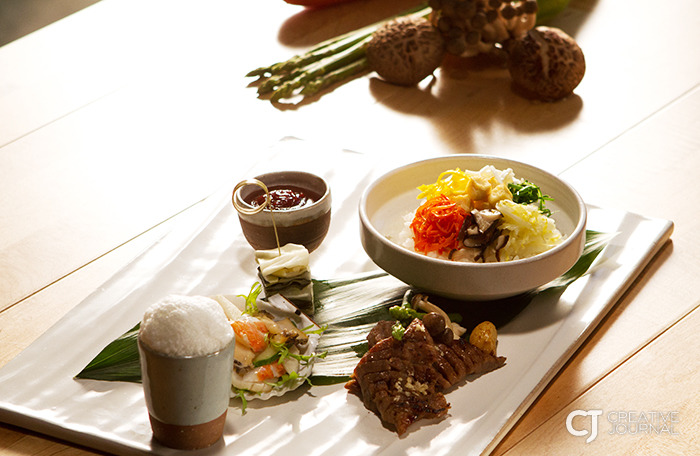 ▲ Believe in the power of a healthy meal!

There is a saying that medicine and food have come from the same origin. An English proverb states "You are what you eat". The problem of what to eat is also that of how to live and how to take care of your health.

Is not it the best way to maintain a healthy diet and balanced meals made with enough time and attention? Protect the health of you and your family with a balanced diet that is rich in fat, carbohydrates, proteins and minerals!

Next
Everything about car lifestyles! XTM MAXIMITE