CJ CGV will become the first Korean multiplex company to participate in the Korea VR Festival 2016 (KVRF) and present a new multi-sensory world of virtual reality (VR) through its subsidiary CJ 4DPLEX. 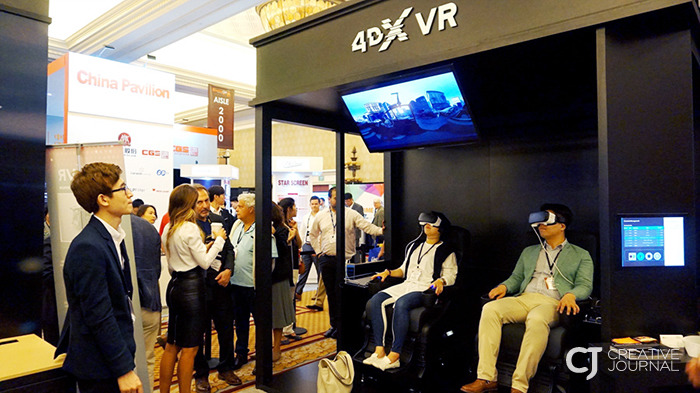 Hosted by the Ministry of Science, ICT and Future Planning and overseen by the National IT Industry Promotion Agency and Korea Virtual Reality Industry Association, KVRF is a VR exhibition participated in by domestic and foreign VR hardware and software companies, including Samsung, KT and Sony. The show will be held at the Sangam DMC Nuriggum Square in Seoul from October 6 to 9 for a period of four days.

CJ 4DPLEX will present an array of 4DX VR products: from a 'rider' type that brings thrills like a rollercoaster based on powerful motions to a 'sports' type where you can enjoy extreme sports content such as racing and MTB on a specially designed sports rider, and the 'motion chair type' where you can enjoy VR contents of various genres on a seat similar to a motion chair in existing 4DX theaters.

Each product combines visual imagery of VR with motion effects and environmental effects and presents intense experiences that break the boundaries between the virtual world and reality.

"In Korea VR Festival 2016, 4DX VR will present a new world of entertainment that enables users to enjoy VR that is more realistic than reality," said Choi Byeong-Hwan, president of CJ 4DPLEX. "It will be a meaningful place where we can show the future of VR cinema, a hot issue in the global cinema world, through 4DX VR."

Unlike existing 4DX technology whose space is limited to theaters, the new 4DX VR can be utilized in various entertainment spaces depending on the type of the 4DX VR product, including theme parks and arcades (experiential zone).

In April, the company showcased 4DX VR for the first time in the world in CinemaCon, the world's largest film industry fair, and in Korea, it opened a 4DX VR theater in Everland, an amusement park in Yongin, Gyeonggi Province.

Next
Chunghwa TV is transforming into a media outlet