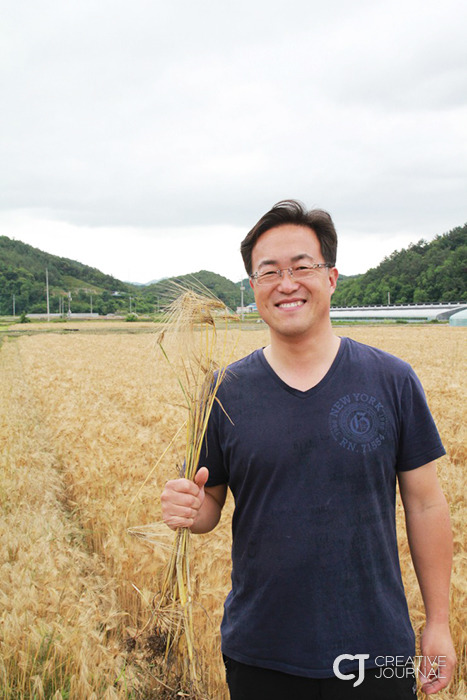 Cripple wheat has been grown in our land since Before Christ. The grain was registered to the Ark of Taste by the Slow-Food Foundation for Biodiversity, which aims to discover food cultural heritages under the risk of extinction, for the first time among Korean native grains.

It is characterized by its unique delicate taste and is also strong against windstorms and insects as it is short. However, most of the wheat currently circulated throughout Korea is imported, and the number of farms growing cripple wheat is continuously decreasing.

To take the initiative in supplying cripple wheat, Season's Table has presented "A Bowl of Rice with Cripple Wheat" since it began to use the grain in July 2014. In this fall, the restaurant brand will also introduce cripple barley and release a new menu selection of "Seasoned Cripple Barley Vegetable Salad" using the grain.

The entire volume of cripple wheat and barley is supplied from farmer Cho Young-Ho from Jinju, South Gyeongsang Province. White gourd is a form of gourd that has a fresh taste and crispy texture. It is a big plant measuring 60cm in length and 10-15kg in weight but it is very difficult to trim and store and it is also very rare; you can taste it only for 2 to 4 weeks a year.

Since October 2013, Season's Table has also striven to develop the distribution and sales channels of white gourds. By buying white gourds every year, the company is infusing life into the production of white gourds, which are currently produced by only a few farms.

Having purchased approximately 1,700 tons of local produce in 2015, Season's Table has already exceeded that amount in August this year with 2,010 tons, and is expected to record purchasing of local produce that is over double than the previous year by the end of this year.

Launched in 2013, Season's Table has introduced a seasonal local dish that tastes the best during the season as well as a dish made of less-known native ingredients once a month on average, triggering a great appeal to farmers as well as customers.

"Season's Table is a leading win-win growth brand that links local farms and cities, providing customers with precious local seasonal ingredients grown carefully by local farmers," said CJ Foodville. "We are committed to preserving our native produce, contributing more to raising the income of local farms and continuously providing our customers with tasty dishes made of functional and fresh ingredients and convenient services."

Launched in 2013, Season's Table is a Korean food service brand that has introduced seasonal functional foods produced from our land while striving to promote win-win growth with farmers.

The company also installed Season's Market, a direct transaction space for produce, both at the entrance of restaurants and in its online shopping mall so that farmers can promote over 80 kinds of processed produce, communicating directly with customers.

Season's Table is planning to gradually increase the amount of local produce available for purchase.