This summer showed us what "scorching heat" really means. Fortunately, that time has gone and now, university students have resumed their scholastic lives amid the cool weather. What memories did you make while enduring the heat wave of this past summer?

CJ Creative Journal visited a cinema class for university students who have come together through their collective passion and love for cinema. Let's meet with some young people who formed some unforgettable memories in the CGV Cinema Class that was held in the Cine Library of CGV Myeongdong Station. 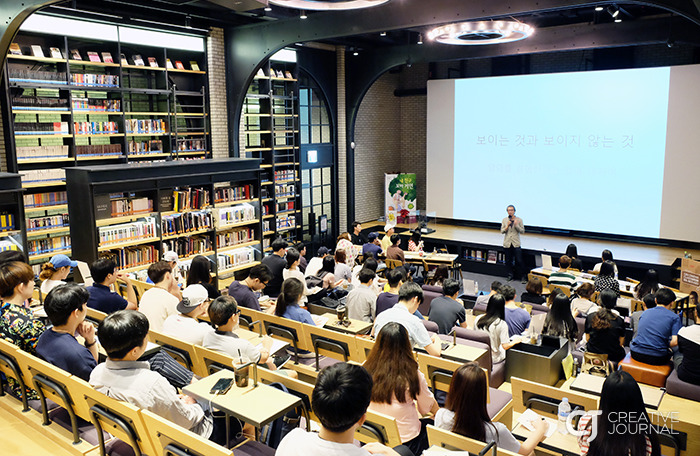 Have you ever heard about Cine Library in CGV Myeongdong Station, located in Myeongdong, Jung-gu, Seoul? CGV Cine Library is a library that has been fashioned after an entire theater, which boasts of over 10,000 books on the subjects of film and culture.

Every Monday, this space becomes transformed into a classroom. The reasoning behind this change is due to CGV Cinema Class, a cinema class for university students and postgraduate students, which will be held for two months from July 4 to August 31, 2016. ▲ Today's class is being presented by film critic Lee Sang-Yong!

Today, film critic Lee Sang-Yong will present a "Film Appreciation" class. In the class, the attendees will watch a film by Buster Keaton, a star in the era of silent black & white film and discuss the film and its ability to communicate and convey meaning through film.

The students in the class looked deeply absorbed in the lecture. The 80-plus students were all ears and engrossed in the lecture being delivered by film critic Lee Sang-Yong. Some could be seen writing feverishly and some looked lost in thought while watching the screen and nodding their head. ▲ The "Film Appreciation" class with a silent black & white film

The Cinema Class lecture room is located in the heart of Myeongdong! While just outside the building, crowds of tourists were milling about amid the ongoing heat wave and pleasant music emanating from different venues along the street, the inside of this classroom was filled with the silent enthusiasm of students.

They were all lost in the lecture, rooted in a desire to know, see and learn more. And their subsequent discussion about the film proved to be hotter than the scorching summer outside and more diverse than cinema itself. Now let's go deeper inside the CGV Cinema Class, which is regularly held at the Cinema Library of CGV Myeongdong Station.

It's time to learn all about cinema from industry insiders 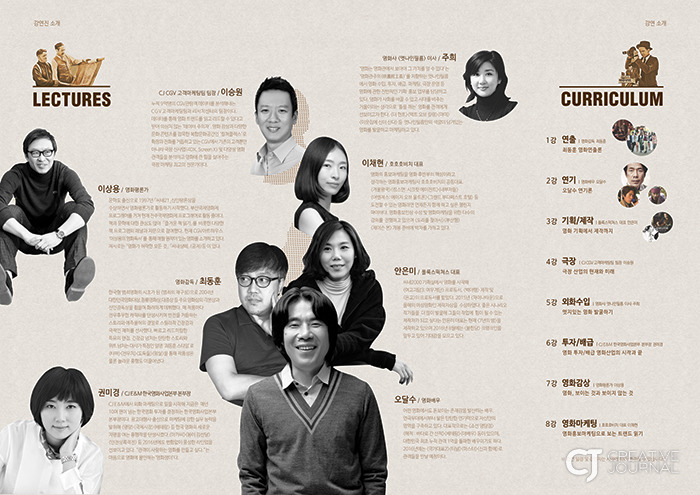 Welcoming its fifth season in 2016, the CGV Cinema Class is held annually and has so far produced a total of 480 successful attendees. Applicants don't need to take an entrance test but the most important quality required for attendees is their enthusiasm about film and how deeply they are interested in the film industry.

In the CGV Cinema Class, the students are initially selected from a competitive ratio of 16:1 and learn from the nation's best film experts on everything about film, ranging from directing to acting, planning and production, theater operations, investment and distribution, film appreciation and marketing.

Aspiring film experts are everywhere but only a limited number of them are given opportunities to gain real information and deep insights on the various jobs of the film industry.

CGV Cinema Class provides introductory education on the film industry to university students dreaming of cinema and helps those students make informed decisions on their prospective career in this industry.

This investment helps foster more talent in the industry and from a long-term perspective, enable the ecosystem of the industry to become healthier.

The curriculum of CGV Cinema Class, under the motto "Cinema Joins Hands with Youth!", is devised by the Theater Team of CGV Arthouse. The curriculum is continuously updated and improved upon based on feedback from the participating students.

In crafting the curriculum, the team emphasizes that the Cinema Class should be able to provide students with opportunities to experience and think of various elements that constitute the word "cinema", including filmmaking, film appreciation and the film industry. ▲ Director Choi Dong-Hoon lecturing about being a film director.

The true power of CGV Cinema Class is its lectures that can be presented only by insiders of the film industry.

The lineup for film importing, PR/marketing and planning and production class includes Joo Hee, former actress and Managing Director of ATNINE FILM, Lee Chae-Hyun, CEO of Hohoho Beach, a PR marketing company that has a track record of locally promoting "Frozen", "Kingsman" and "Inside Men", and Ahn Eun-Mi, CEO of POLLUX PICTURES, who produced "A Muse" and "Chinatown". 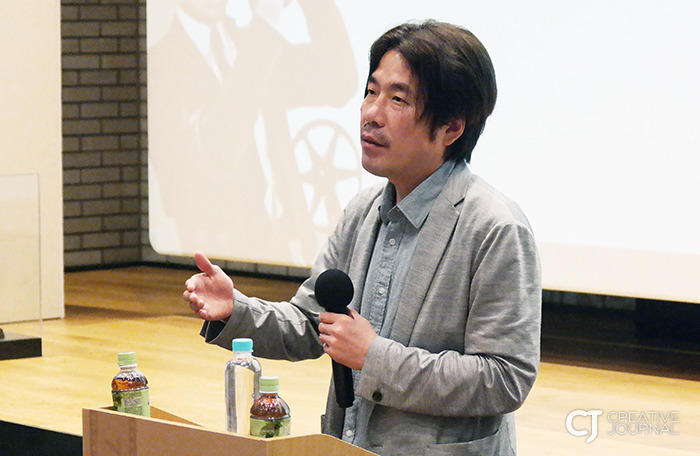 CJ Group employees also offered their own lectures based on their expertise. Lee Seung-Won, head of the Customer Marketing Team of CJ CGV addressed the audience on the subject of the present and future of the theater industry and Kwon Mi-Kyung, director of the Korean Film Division of CJ E&M, spoke to students about film investment and distribution.

Immersion - time to demonstrate their enthusiasm about film The results of their task that they made together will be presented and evaluated at the Cinema Class graduation ceremony.

The class also includes a meeting with film industry professionals. Students pose questions to those film experts and listen to their vivid stories.

If any member of the best performing group selected at the graduation ceremony applies for CGV recruitment within one year from their graduation of CGV Cinema Class, they are eligible to receive additional points in the document screening process of their application. ▲ CGV Cinema Class supports young people to open up the door to their dreams!

To young people who suffer from the prolonged economic recession and unemployment that is gripping the nation, it might be somewhat difficult to talk in terms of "dreams" and "art". Despite the irony, they should not stop conversing about their dreams and art simply due to the tough reality they are currently facing.