Late Saturday night, many unknown "cinema aficionados" gathered in Yeouido. They are here only for one purpose: to win the "Challenge! Escape Cinema Quiz King". Let's take a look at how 200 cinema enthusiasts competed to win the quiz contest. Marking its third season this year, the "Challenge! Escape Cinema Quiz King" is a cinema quiz contest of CGV for film lovers. The 200 players who gathered at CGV Yeouido were 100 top rankers from an online preliminary round and their friends.

This contest was hotter this year because it held an offline final for the first time. In the final, players had to find clues and solve quiz questions in a limited time to get through three stages to escape from the theater.

The new final rule inspired by room escape games triggered the thirst for challenges possessed by many. Aside from this, the participants were highly motivated by the best prizes ever, including CJ ONE Points worth 5 million won, movie tickets and gifticons. 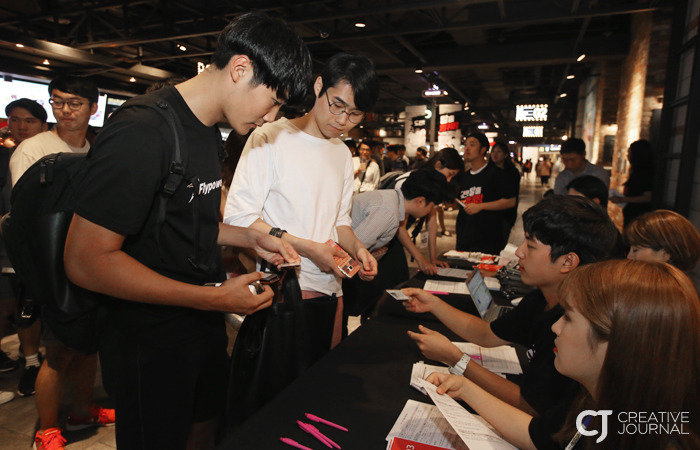 ▲ CGV Yeouido, the venue for the offline final

Known to be the first ever and largest ever, the "Challenge! Escape Cinema Quiz King" final was held at CGV Yeouido on Saturday, August 27, attracting strong attention from cinema enthusiasts.

The tension was high in the venue that was crowded with movie buffs. The two-person groups of participants registered their name and received a number tag, a bracelet and a survival kit. 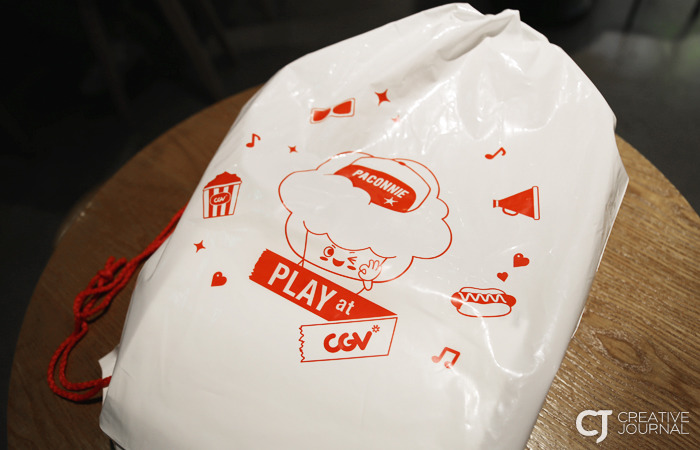 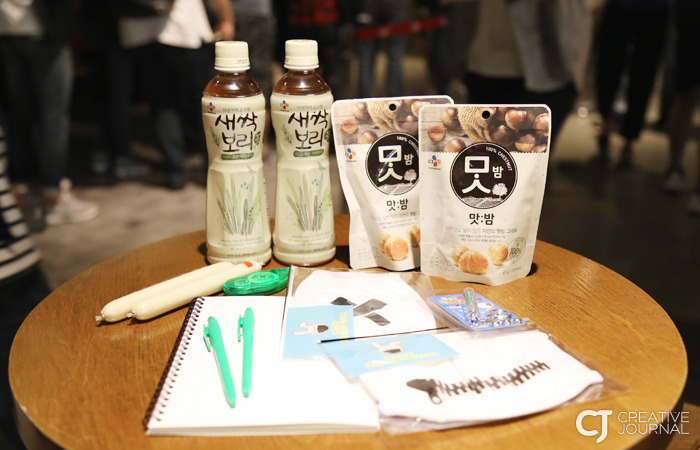 ▲ The Escape Kit consisting of various items needed for the game

As the game was held at night, the kit contained "Matbam" snacks, sausages and two masks and two notebooks required to play the game. It is said that the kit was really useful in the game. 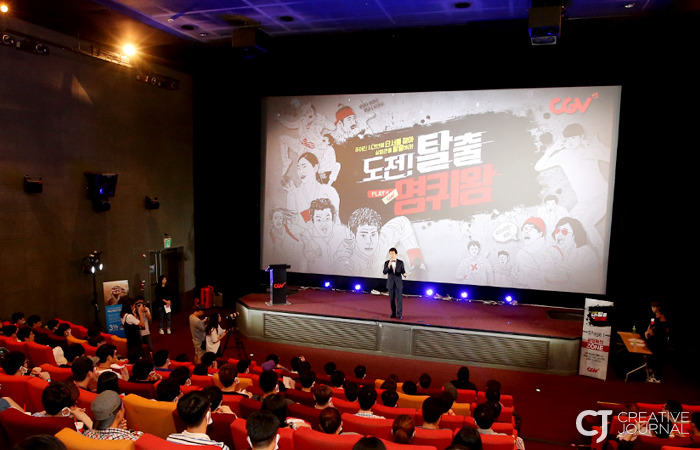 After the registration of 200 participants, the "Challenge! Escape Cinema Quiz King" contest finally started! The host was announcer Shin Young-Il who has 17 years of experience as a quiz show host. He relieved the tension of participants with his clear and witty hosting, sometimes making them laugh. 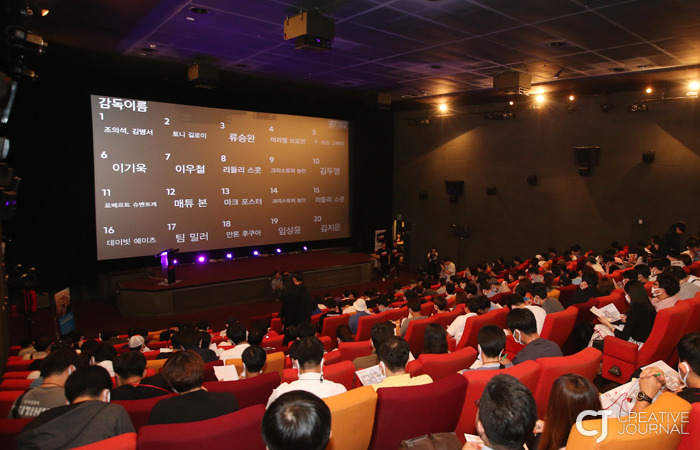 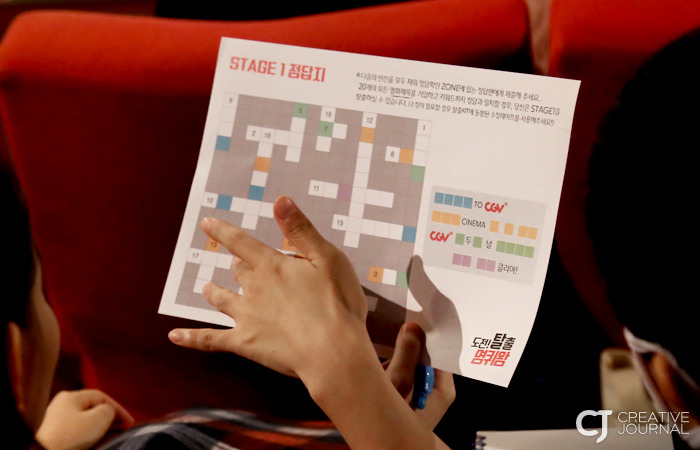 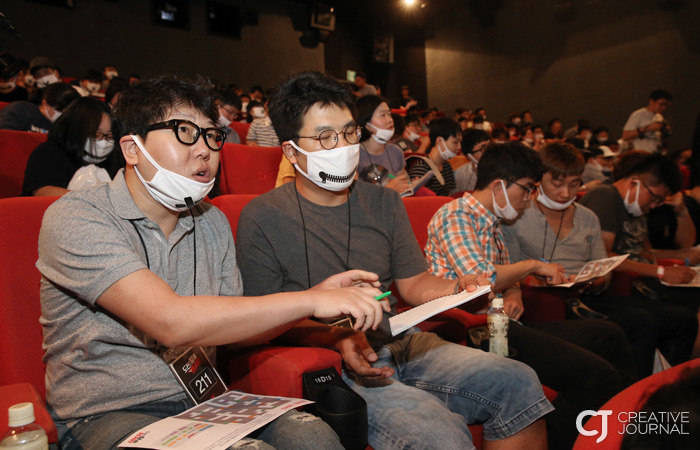 It's ten o'clock sharp after the opening, and the final to find out who is the Cinema Quiz King finally began. The Stage 1 "King of Titles" theme was "Action"!

It's a crossword puzzle that possesses a total of 20 film titles. The participants in the theater seats had to find out the title of the game while watching the hints on the screen. They must accurately get all the answers to move to the next stage.

While watching a variety of hints from cast to director, the initial consonant of the title, and stills, the players were concentrating their minds on the screen so as to not miss any hints. They solved the quiz, taking notes with a notebook and a pen from their Escape Kit.

While many of them were struggling with the challenging first stage, successfully teams emerged, one by one. Players who got all the answers submitted their answer sheet to the staff in the Answer Zone and moved to the next stage. 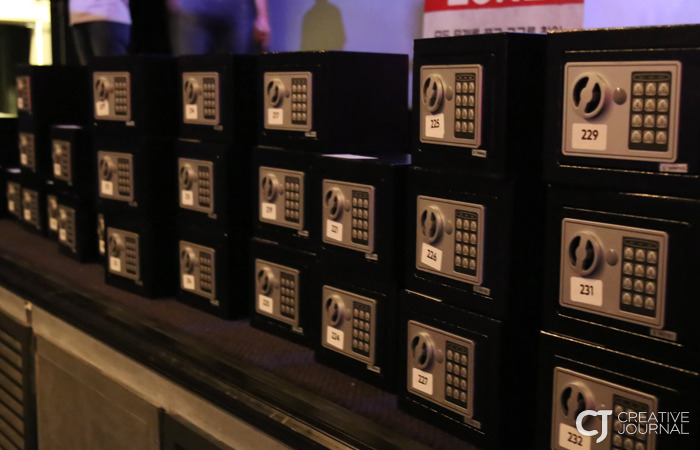 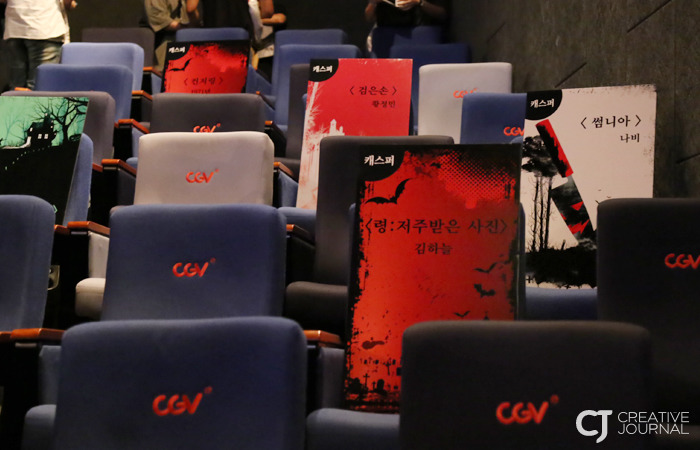 Surrounded by a dark atmosphere and creepy music, the Stage 2 'King of Story's Theme’ was horror! What was waiting for players when they entered the theater were strange safes and panels.

There were four horror movie character zones: Jack, Freddy, Caster and Chucky. Each zone had ten O/X quiz questions, and their mission was to find out the number of "O"s.

The number of "O"s from each zone is in fact the password for their safe. What is inside the safe? Players looked determined to find out what’s inside! 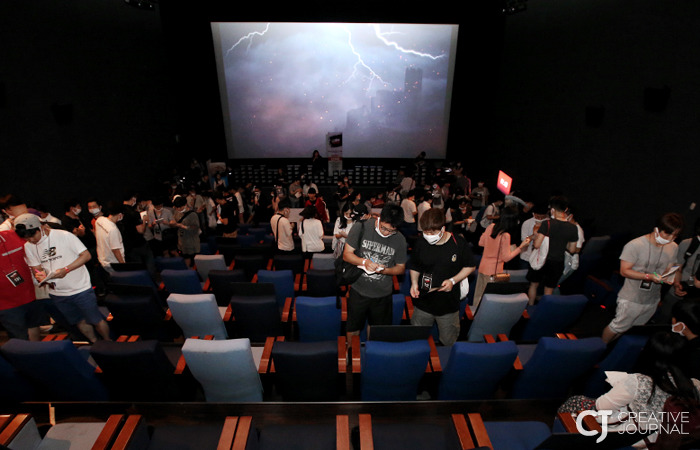 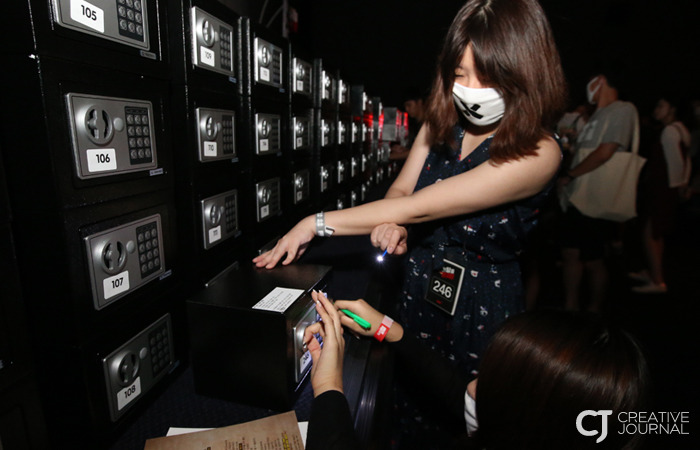 ▲ The mission of 'Stage 2. King of Story' is to open safes with the password from the O/X quiz.

Players ran all around the theater to find out the password. The flashlight from their Escape Kit was like a ray of light in the dark theater with the horror theme.

With sounds of sighs from here and there due to confusing quiz questions, some of them chose to summon the Hint Man. From this stage, participants could use hit chances. From 10 minutes after getting in the theater, they could get a hint from the Hint Man every 10 minutes for up to three times.

They tried to solve the questions, recalling even the horror movies they had watched with a blanket covering their eyes in their childhood. And the safes began to be opened. What they got from the opened safe were an MP3 player and the mission sheet for Stage 3. What was the purpose of the MP3 player? 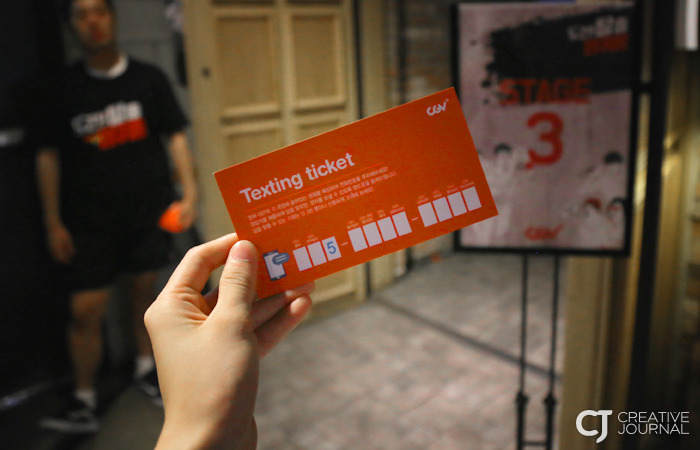 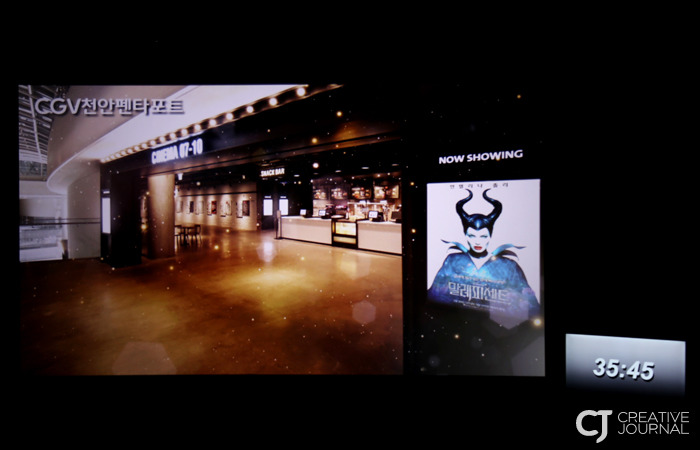 ▲ What is the song that is lingering in their mind? 'Stage 3. MATCHING ME IF YOU CAN'

Now they were heading for the last hurdle to the final stage! Entering the third theater, they encountered with a silence unlike the noisy atmosphere of the previous stages. Some players who had passed Stage 2 earlier than others were sitting in their chairs, listening to music from their earphones.

The MP3 player they got from the safe in the previous stage was the key to pass Stage 3. The music from their MP3 player was an original soundtrack of a fantasy/adventure film, which was the theme of Stage 3.

The mission of Stage 3 is "MATCHING ME IF YOU CAN"! The screen was showing eight CGV theaters that were showing a film known for its soundtrack. To clear the mission, they have to fill in the phone number in the ticket to reach the final stage by matching each CGV branch with the track number of the soundtrack in their MP3 player. 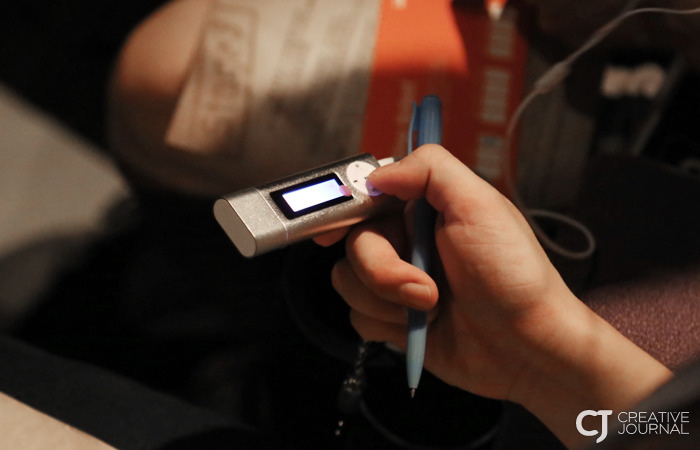 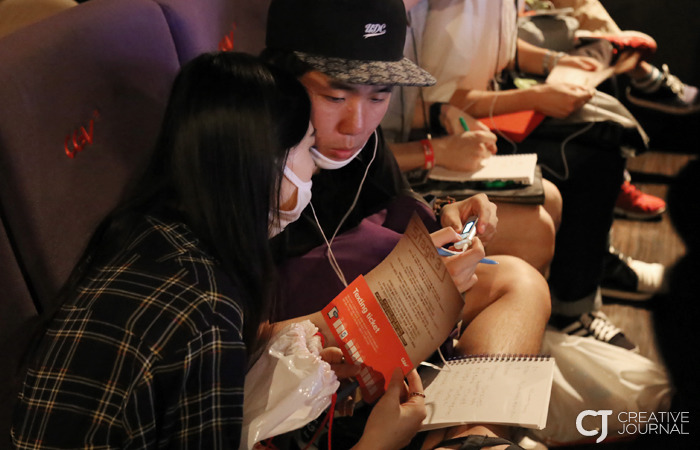 ▲ Almost made it! Players in deep focus.

They are given three chances to check out whether their answer is correct. Listing to music again and again, watching the screen over and over, players must succeed in only a few chances.

Finally, the first escapee appeared after elapse of the extended period of silence. After a moment of agitation, as two other teams successfully escaped from the stage, the final three teams that would advance to the final stage were decided.

The king's accession to the throne is at hand! What is the result of the final stage? 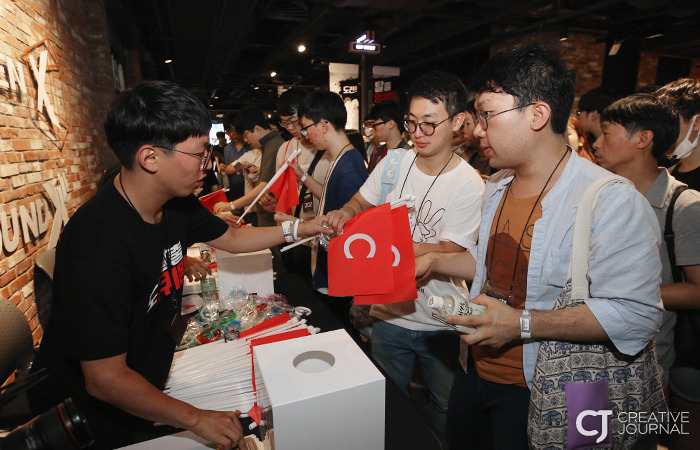 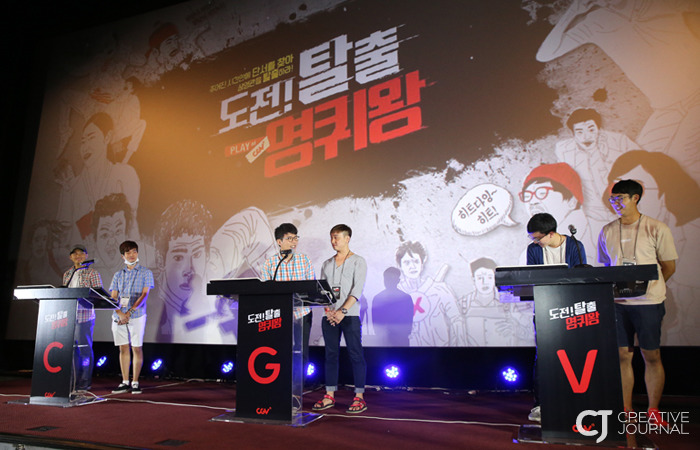 ▲ The final stage kicked off with an amusing event.

Now, it's time for the final stage! The three finalists who quickly and accurately passed the previous stages were assigned with an alphabetical letter: "C", "G" and "V" respectively, and were waiting for the final game.

Without knowing which team was given which alphabetical letter, the rest of the participants who could not make to the final picked a team they wanted to support and placed their number tag they had received at the beginning of the event into one of the boxes.

It was a surprise event: if the team you support wins, you are also given a gift. In addition, after the final stage, various other giveaways were given through a draw to those who couldn't make it to the final. 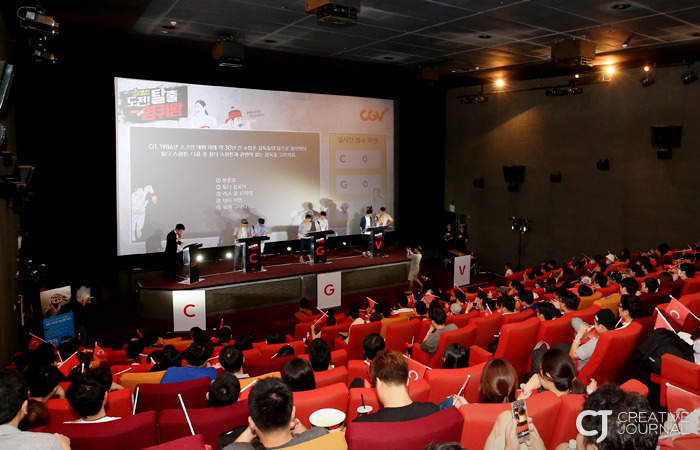 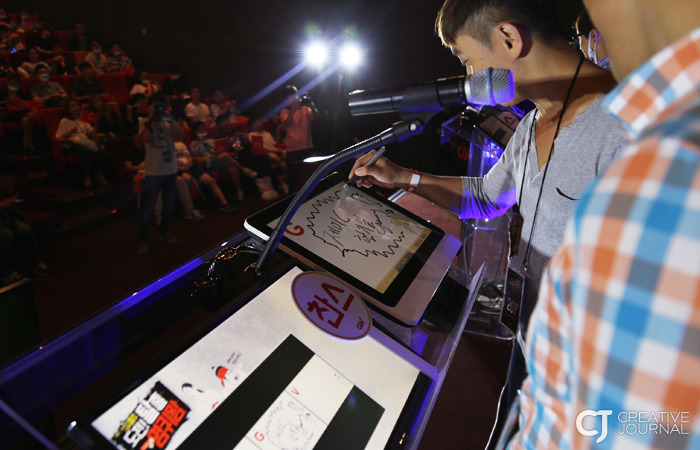 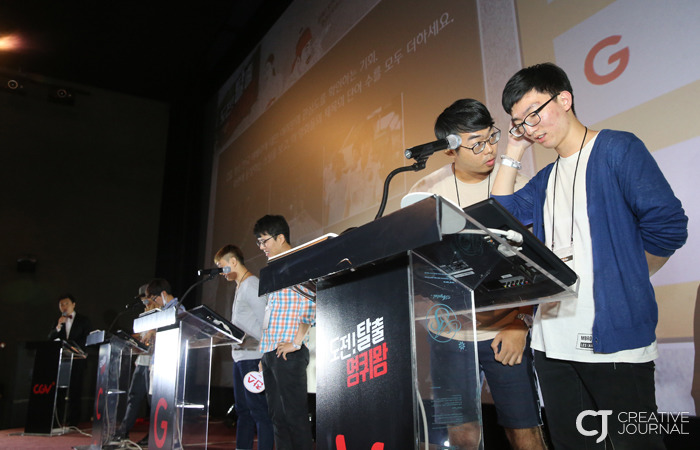 The final stage was held in the first theater that had started the "CGV Challenge! Escape Cinema Quiz King"

Each team was given a single chance to summon one of their supporters onto the stage to solve the question together. The chance was a breeze for some but elusive for others.

It was a close game; the three teams repeatedly took the lead from each other, and they ultimately tied the score and went into an extra game! After doing the extra quiz questions, who do you think became the winner? 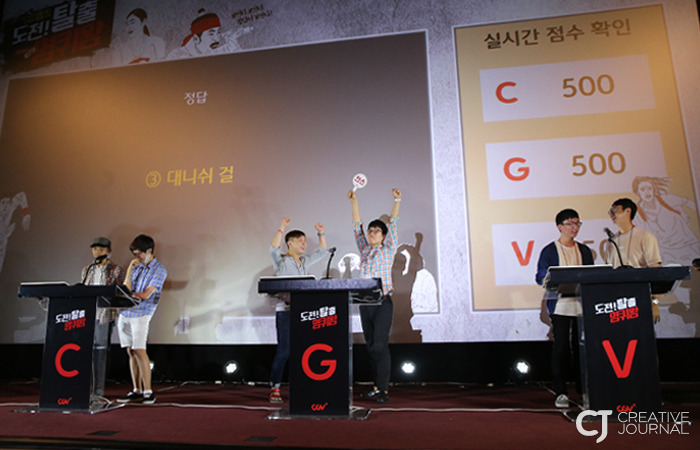 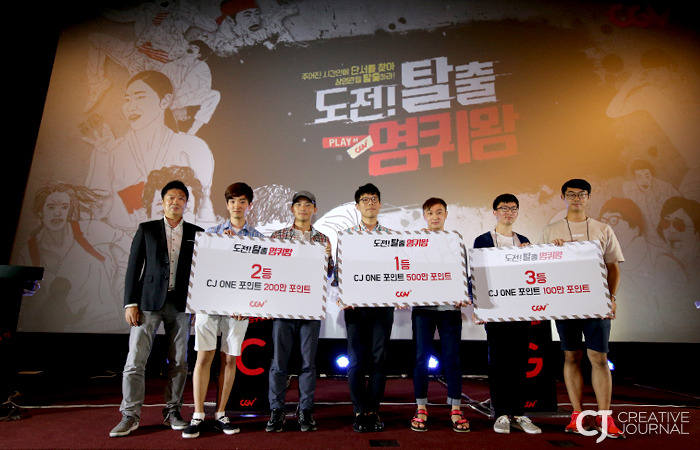 It was already 1:00 AM and the eleventh question received different answers from the teams. And the G team, who said "Danish Girl" for the last question finally ascended to the throne! The winners got through all the challenges starting from the online preliminary round and they finally made it.

Amid the applause of the audience toward the three finalists who showed an amazing competition, the third “CGV Challenge! Escape Cinema Quiz King” came to an end.

Who became the Cinema Quiz King after the close game? G team won the game! Mr. Han Ki-Il and Mr. Kim Jong-Chan looked dazed that they were proven to be the winners. A talk with them revealed that they were true cinema lovers. 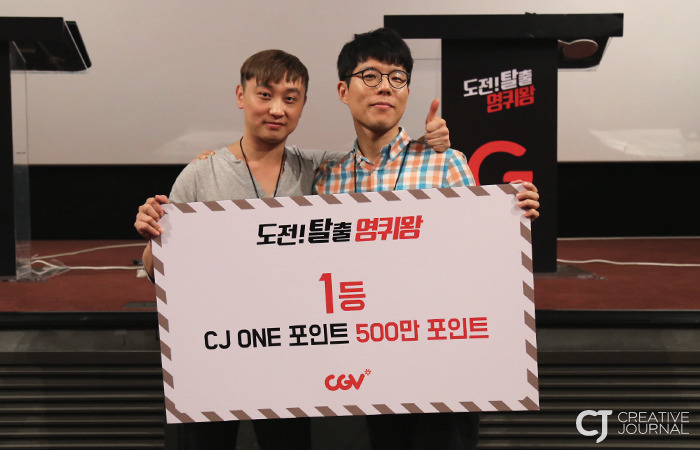 "I love films and I wanted to see how much I know about films."

Mr. Han says he likes watching movies and that he is also a CGV fan who visits the CGV website often. He says he heard about last year’s event as well but couldn't participate in the event as he missed the deadline.

So he waited for this season for a long time and joined the online preliminary round and finally became the winner. I asked him which stage was the most impressive.

"Personally, the third stage was the best. I love film music and listen to many film scores. When I heard that the stage was about music, I expected to hear music collections that were used in films but to my surprise, it presented original scores.

In fact, original scores are less popular in Korea, and I felt a bit closer to film as CGV chose such kind of music."

* Original scores: The incidental music composed for a film. ▲ Keep your enthusiasm about film!

On the contrary, Mr. Kim Jong-Chan chose Stage 2 as the most impressive. He said he liked the fresh process and sensible components of the stage. It is assumed that the diversity of the stages appealed to the participants.

They also left a piece of advice for future challengers. Listening to their advice, I was motivated to put forth great effort at a more exciting event next year.

"If the Cinema Quiz King is held again next year, I think it would be better to make the preliminary round more difficult. Multiple choice questions are good and I guess short-answer questions for additional score would be nice. As for the offline final, I think it is good to have more questions to solve while watching the screen or clip. ▲ The 33-day long journey came to an end! See you next year!

The CGV Challenge! Escape Cinema Quiz King has finished its 33-day journey from the online preliminary round to the offline final. This season made a difference with its first ever offline final and the largest prizes ever! And the show must go on in order to find the next Cinema Quiz King!