Having sparked a craze on native lactobacillus with its Kimchi probiotic series, CJ CheilJedang is releasing new "BYO Multi-Probiotic Powder", which is functional to the intestines, skin and immune balance.

All-in-one, from healthy intestines to healthy skin and immune balance 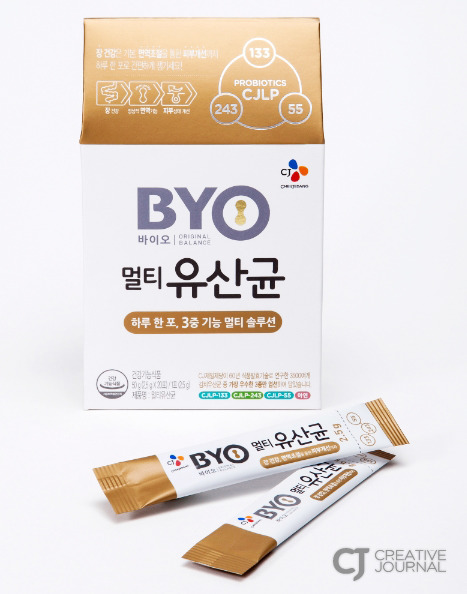 While most other recent domestic lactobacillus products are focused on a single functionality, CJ CheilJedang is ambitiously opening up a new era in the probiotic market by releasing a premium product functional to the intestines, skin and immune balance at the same time. Through this, the company is expecting that it will be able to solidify its position as the No.1 native lactobacillus supplier in the country.

"BYO Multi-Probiotic Powder" is a premium probiotic product containing three of the best lactobacillus varieties selected out of more than 3,500 varieties found in kimchi.

As for the CJLP55 variety, CJ CheilJedang in cooperation with a skin research team, conducted a human test with adults with skin problems and found that the variety improves such skin problems.

Each packet of BYO Multi-Probiotic Powder contains the three varieties of more than 100 billion CFUs, with the largest guaranteed number of CFUs in Korea with 12 billion CFUs.

For consumers with sensitive skin, the product does not contain any synthetic additives other than kimchi lactobacillus and contains oat fiber, one of the world's top 10 super foods, to elevate the effect of the product by helping lactobacillus settle in the intestines.

The new "BYO Multi-Probiotic Powder" is expected to be especially embraced by consumers who want multiple effects from the same product or adult females who are sensitive to skin health.

CJ CheilJedang's BYO Probiotic Powder line is being recognized to have opened up an era of "Korean probiotics" in the domestic market that used to be dominated by imported milk-derived animal probiotic products by developing plant probiotic products derived from kimchi, a Korean traditional fermented food.

Particularly with the CJLP133, a main lactobacillus variety used in the BYO Probiotic Powder line, it has been patented in 10 countries, including Korea, Japan, China, Hong Kong and Europe, and has also proven its safety by acquiring the approval of the U.S. Food and Drug Administration (FDA).

CJ CheilJedang Health Marketing Manager Han Jeong-Yeop said, "With the release of the new BYO Multi-Probiotic Powder, we now have three products in our BYO kimchi probiotic lineup. Through continued R&D and investments, we will take the lead in the functional probiotic market at home and abroad with our Korean native probiotic products."

BYO Multi-Probiotic Powder is available at all O’live Young stores throughout the nation for 40,000 won (20 packets per box, 20 days). To celebrate its launching, the new product will be available at a discounted price until the end of September for 29,900 won.