CJ prepares MINEWATER donation along with consumers for UNICEF 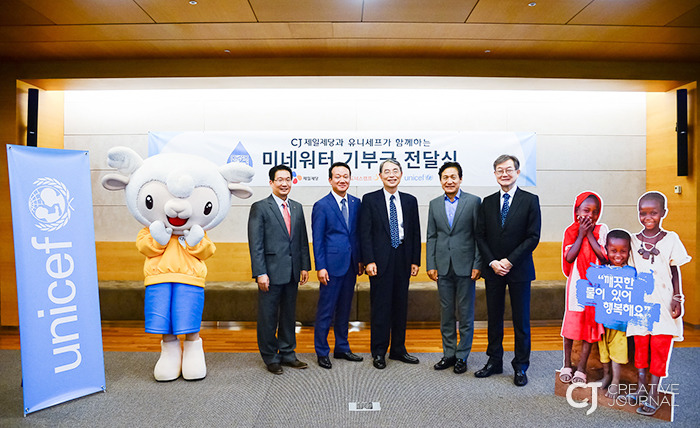 Launched in March 2012, the CJ CheilJedang MINEWATER BARCODROP campaign was designed as "cause marketing" which is participated by both the company and consumers to put sharing in practice through products.

Whenever consumers buy a bottle of MINEWATER from deep sea water, CJ CheilJedang donated 50 won, and over the last five years, the company and consumers collected a total of 257 million won and delivered the funds to the Korean Committee for UNICEF, which will use it to execute a project for supplying drinking water to African children.

The drinking water contamination issue in some countries including those in Africa is so serious that it was designated among the 2030 Agenda for Sustainable Development Goals of the United Nations.

The donation will enable the UN to provide some African regions with 150 manual pumps, 10 million water-purification tablets and 1,000 drinking water kits. The purification equipment is expected to help these regions resolve water shortage issues for children.

The Korean Committee for UNICEF Chairman Song Sang-Hyun said, "We welcome donation marketing that can help global children in need through desirable consumption in our daily life. This fund will make a difference in the drinking water project for children in developing countries, including those in Africa who are suffering from water shortages caused by severe droughts."

Meanwhile, CJ Group is not only conducting the MINEWATER campaign but it is also actively tackling many other global issues included in SGDs, executing various campaigns, including the Vietnam Saemaeul CSV project aimed to raise the income of farmers in Ninh Thuan, one of the poorest regions in Vietnam, and the CJ-UNESCO Girls' Education campaign to provide better education opportunities to girls around the world.