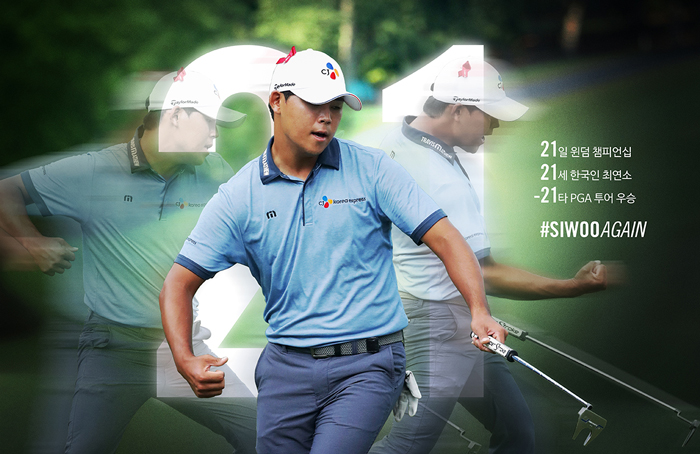 On August 21, 2016, pro golfer Kim Si-Woo took home the trophy at the PGA Tour's Wyndham Championship held at Sedgefield Country Club (7,127 yards, par 70) in Greensboro, North Carolina, U.S. He closed with a 21-under-par 259, tying the tournament record. Born in 1995 and currently 21 years and two months old, with this Championship title, he also set a ground-breaking record for being the youngest Korean golfer to win on the PGA Tour.

In 2012, he came into the spotlight by becoming the youngest golfer ever to graduate from the PGA Tour Qualifying School at the age of 17 as a high school sophomore. At the time, being under 18, he wasn’t eligible for a Tour Card and thus went on to make his PGA Tour debut in the following year, thereafter playing in 8 tournaments. The outcome wasn't pretty: he had to taste the bitterness of one withdrawal and seven instances of failing to make the cut.

After being demoted to the Web.com Tour, sort of golf's minor league, Kim Si-Woo suffered some tough growing pains: playing in 19 non-major tournaments and making the cut only 4 times. But he soldiered on. Over time, he managed to rank 10th on the money list with his win at the Stonebrae Classic and other feats, and in 2016, he eventually made his return to the links on the PGA Tour.

In early 2016, after having pushed himself for two years, Kim Si-Woo began to take the PGA Tour by storm. At the Sony Open, He landed 4th place after facing fierce competition, posting a score in the sixties every day during the four days of the tournament. Following that, he finished 9th at the CareerBuilder Challenge. Then, at the Barbasol Championship held in July this year, he placed runner-up. That was the moment when the fruits of Kim Si-Woo's patience and firm will started to show.

After finally capturing his dramatic first PGA Tour victory at the Wyndham Championship this year, Kim Si-Woo expressed his feelings about the win, saying, "It feels like I'm dreaming. I didn't expect to win a championship this soon. Losing in the playoffs and ending up as runner-up at last month's Barbasol Championship spurred me to grow further. Most of all, I think that the past two years I spent on the Web.com Tour made me stronger. I'm thrilled and I'm overwhelmingly reminded of when I first came to America with the aspiration of making it onto the PGA Tour."

Kim Si-Woo, who elevated his FedEx ranking to 15th with his winning of the event, secured a PGA Tour Card for the coming two years as well as a spot in the FedEx Cup Playoffs this season and a place in the Masters Tournament next season. "I hope to grow into a golfer who will make new history on the global stage," said Kim Si-Woo.

On an additional note, as of August 23rd, 2016, many Korean players are included in the World Golf Ranking, namely Ahn Byung-Hoon (CJ Group) at 34th, Kim Kyung-Tae at 51st, and Kim Si-Woo (CJ Korea Express) at 62nd.

In keeping with its philosophy "we put young prospects before star players," CJ made a promise to sponsor Kim Si-Woo when he was prepping for the qualifying school in 2012. And with a 3-plus-2-year contract, CJ began its lavish sponsorship of the player regardless of whether he passed the qualifying school or not. In addition to Kim Si-Woo, CJ is also sponsoring six other male pro golfers (Ahn Byung-Hoon, Lee Su-Min, Lee Dong-Hwan, Lee Kyung-Hoon, and Lee Chang-Woo) and four female golfers (Baek Kyu-Jeong, Kim Min-Sun, Park Ji-Young, and Kim Jeong-Soo). For more information, please visit CJ Sports' golf homepage.