“The future of the cinema industry will be in building on the success of Korea’s CGV.” 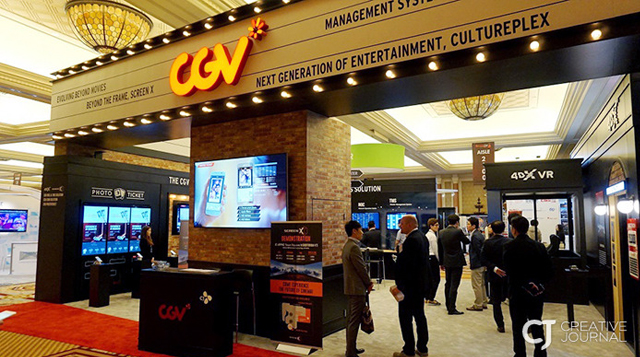 CJ CGV has won major plaudits at CINEMACON 2016, the cinema industry's most prestigious convention, which was held in Las Vegas, US from April 11 to 14. CJ CGV is attracting huge interest after being hailed as “the future of the cinema industry” by movie professionals around the world.

Cinema operators paid special attention to "Cultureplex", the unique philosophy and concept of CJ CGV. In a morning session held on the opening day (April 11; local time), Jang Yong-seok, a vice president of CJ CGV strategic plans division participated as a panel member, mentioned that “the future of cinema is based on differentiated audience experience and Cultureplex”.

Jang turned heads by citing CJ CGV’s special theaters, such as 4DX and ScreenX, and various examples of the Cultureplex complex in Korea. As soon as the term "Cultureplex" was mentioned as part of the opening day’s first event, it became the talk of the town all day.

This means CJ CGV’s efforts to transform theaters into new cultural places by maximizing the available spaces as well as creating special theater, are succeeding in the market. In subsequent seminars, CJ CGV was cited as demonstrating the best practice for the future of cinema.

CGV has proved itself as the world’s top multiplex chain! “Technological developments have continued to threaten the cinema business. Given that some companies, however, have positively invested in the cinema industry and executed mergers and acquisitions worldwide, the future remains bright,” said Ramirez, “The special cinema technologies of South Korea’s CJ CGV, like 4DX, will become one of the leading cinema trends of the future.”

“These days, audiences focus not only on the movie they see, but also the way they see it. For instance, they want to choose whether to see a movie with 4DX which provides intense experience involving the five senses, a huge IMAX screen or in a quiet VIP-style theater setting.”
“Four years ago, when the first 4DX was brought to Cineworld, some were skeptical about the chance of 4DX continuing to grow in popularity. But now, this view has completely disappeared as the number of 4DX auditoriums has risen to 14 within Cineworld Group. The special theaters of CJ CGV are the format the world should pay attention to most of all.”

At other seminars, some presenters even said “CJ CGV’s Cultureplex is a concept which embraces all the strategies that the world’s cinema operators want to try. In this regard, the company’s special theaters and Cultureplex are particularly thought-provoking for those seeking to map out the future of their businesses.”

CJ CGV proposes a counterplan for the future of cinema culture Seo Jung, CEO of CJ CGV, said: “Although the major issue of CINEMACON for a few years has been how to proceed in the cinema industry in the future, there was no specific plan. The term "Cultureplex" created by CJ CGV has offered a ray of light at the end of a tunnel for the world’s cinema operators.”

“At CINEMACON, we were able to confirm that our concept Cultureplex concept can produce good results in the global market. In addition, we were also able to gain confidence that CJ CGV, as the world's fifth largest cinema chain, can lead the global cinema culture quantitatively, as well as qualitatively.”