People today seem to always be in a hurry, and are only truly satisfied when their results become tangible. Everyone seems to want to be a star and be the very best. However, there are young people out there, along with a group of dedicated mentors, who are trying to plant the seeds of their dreams and cultivate them with proper care. You can see the fruits of their beautiful efforts at Dream-Up Stage, the creative presentation of CJ Donors Camp Dream-Up School.
Six months of efforts are finally receiving attention on stage 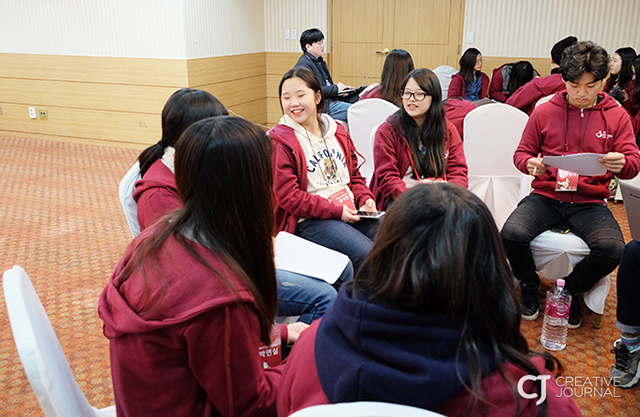 Dream-Up School is a major dream project of the CJ Donors Camp that helps young people experience different jobs and provides mentoring as a means to develop character. This is achieved by taking advantage of CJ Group's food and culture business infrastructure, with an aim of helping young people achieve “healthy growth”. The Dream-Up Stage is where the young people are able to showcase what they have learned and created for five months at Dream-Up School.

Since its start in 2013, Dream-Up School has provided more than 300 young people with the chance to experience a range of professional jobs. CJ Creative Journal has also covered the stories of some of these students in Dream-Up School and
their efforts in the learning field.

The 3rd class of students entered Dream-Up School in the summer of 2015, and they went on to accumulate many lasting memories over the next five months. Students who once were strangers to each other at the outset have become best friends on their way to achieving the same dream, and their goals in life have also become clearer.

These young students, through communication and interaction with their mentors, have experienced remarkable growth. They learned that nothing is possible without effort, and that learning and training should go hand-in-hand to turn dreams into reality. 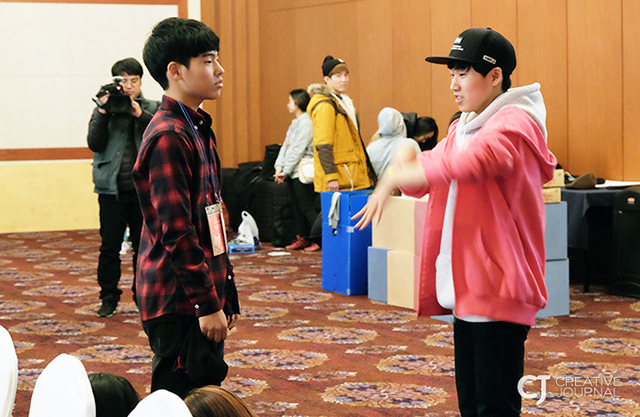 "You sing really well!", "I love how you're dressed. I think you have great fashion sense!", "I really think that you could be a good entertainer one day!" The support of their friends has helped their dreams become a reality through Dream-Up School.

Students who were praised for singing had a natural affinity towards music; students who were said to have a great sense of style chose home shopping; and students who have artistic talents tended to study for musicals. Professional mentors, who can become an ideal role model for the future of students, came together with them to help them make realistic progress towards realizing their dreams. Those professional mentors include popular musician Jeong Won-yeong, musical actor Nam Kyeong-eup, fashion stylist Han Hye-yeon, chefs Raymon Kim and Lee Yeon-bok.

There were some moments when they felt that they were veering off their intended path and being not sure of whether they were even going in the right direction to begin with. Then there were mentors who were college students who they could turn to for advice. Those mentors remained by their sides through thick and thin, just as if they were their own sister or brother.

Singing a song at the same tempo, while dreaming of their future 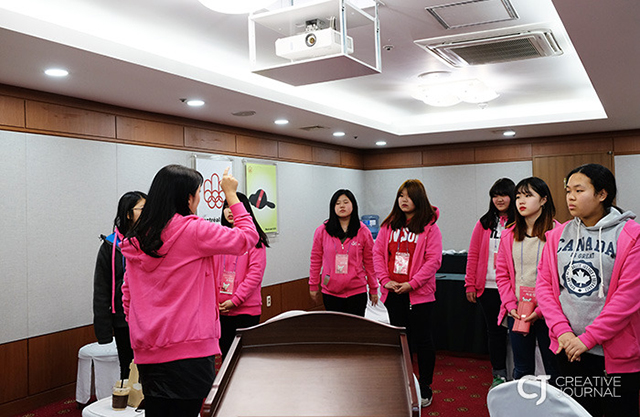 ▲ Attentively listening to the advice of their mentor

“I Dreamed a Dream”, the popular number of the musical Les Misérables, could be heard faintly from behind the closed door of the 2nd floor conference room at Seoul Olympic Parktel. When we opened the door quietly, we were able to see students singing in chorus.

"One, two, three! Focus and with one voice!" 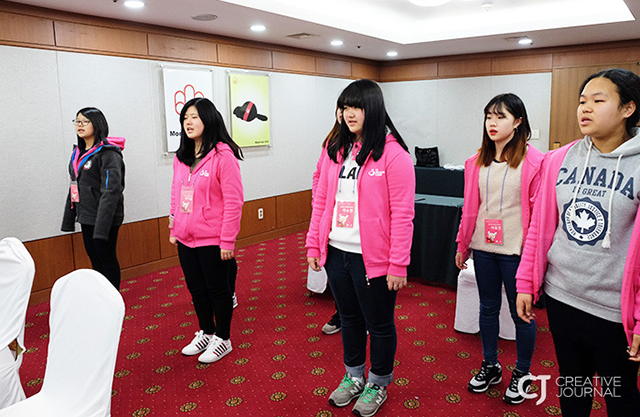 ▲ I Dreamed a Dream

Chords resonated while they sang by following the instruction of their mentor. Beautiful singing voices filled the room. I couldn’t believe my ears over how teenage girls could make such a wonderful chorus. Their immersion made us feel like we were already watching their performance on stage. ▲ They reflect on uplifting moments of singing together

They chose music because they like singing and they happen to sing well. What they learned in Dream-Up School, however, was not just about how to sing better. They also learned to create great music. They came to feel how pleasant it was to sing together in harmony, rather than alone. 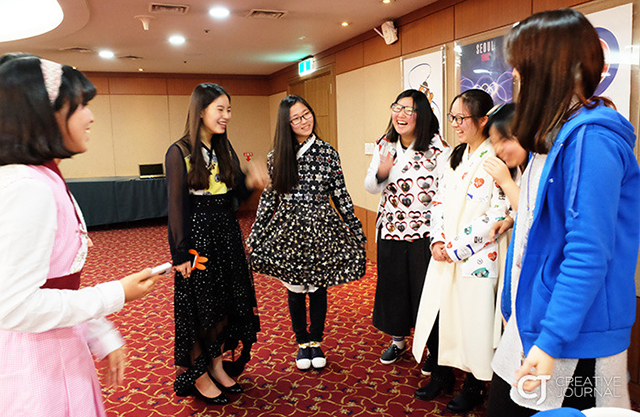 ▲ The students can be seen wearing costumes they created by themselves

Another group of students have learned how exhilarating it is to prepare “together”. We visited a practice room where we could find these students enthusiastically undergoing a final rehearsal for their “home shopping show”, while rechecking their hanbok (traditional Korean attire) that they created as their motif! ▲ Every rehearsal needs some time to relax and have some snacks!

There is an old saying that goes, “Too many cooks spoil the broth”, but this adage is not necessarily true with this particular group. They seem to coordinate so fluidly with each other, and effectively divided up their preparatory work amongst themselves. We truly could get a sense of the deep mutual trust they had built up over the past 6 months.

Amid the tough routine of the preparation phase, they were able to forge lasting memories. 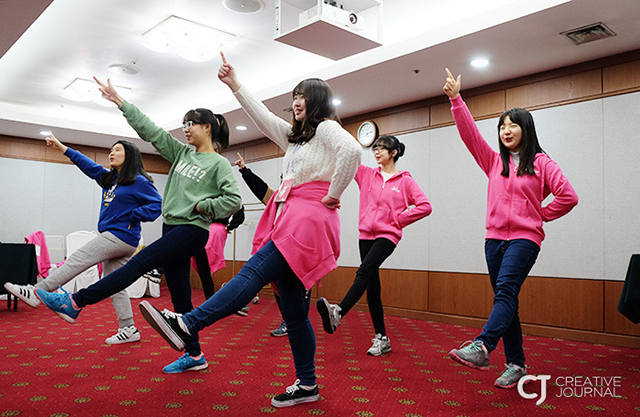 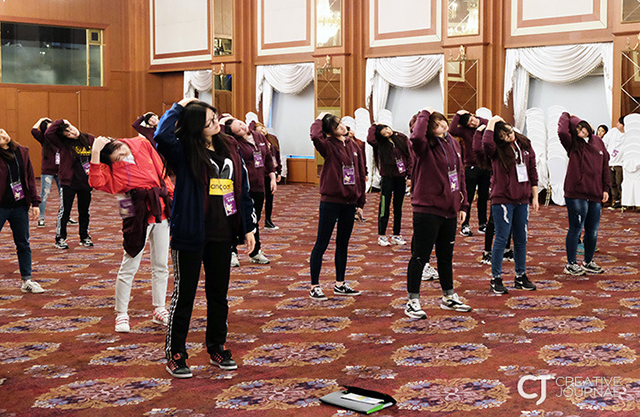 ▲ Students can be seen warming up before rehearsing their musical show 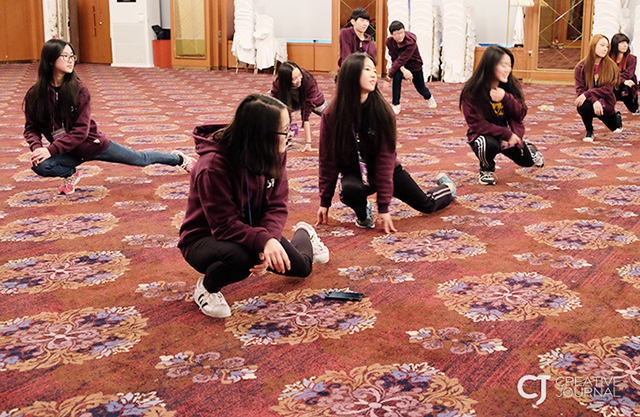 The single word that students in Dream-Up School tended to utter the most was “cool”. Seeing all their faces lit up with a bright smile rather than full of nervous anxiety ahead of their big performance, we could feel the real value of their dream: When we entrust our children, their dreams grow.

The Dream-Up Stage was alive with passion and hope! 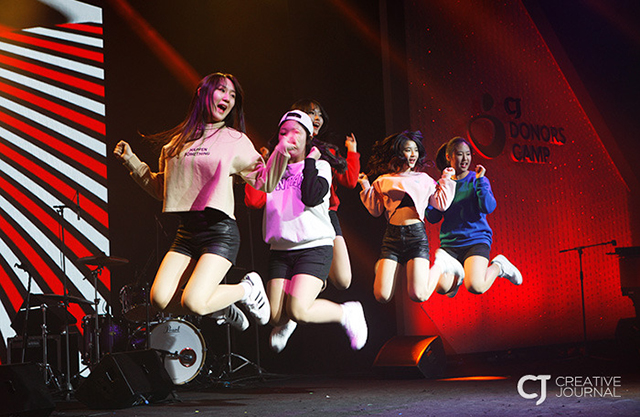 ▲ Dancers can be seen executing a perfect performance!

Despite all their worries throughout rehearsal, they were able to pull off a flawless performance!

Finally, the Dream-Up Stage started. It was held at Sungkyunkwan University from January 23 to 24! Families, friends, mentors, and executives and staff members of CJ Group all gathered to watch the carefully choreographed performances of the Dream-Up Students. 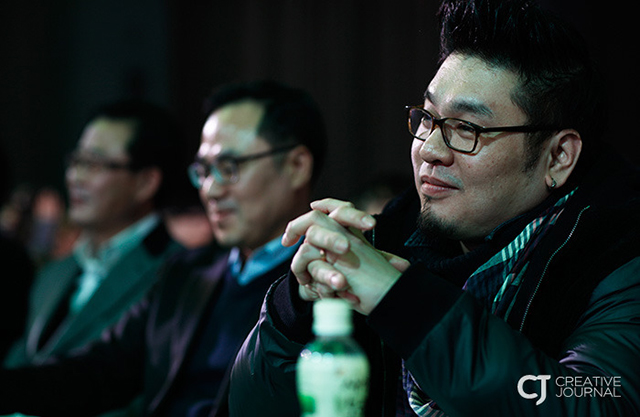 Many professionals came to cheer them on: about 20 professional mentors including musician Jeong Won-yeong, chef Raymon Kim, fashion stylist Han Hye-yeon, and musical actor Nam Kyeong-eup; and around 40 executives and staff mentors of CJ Group, including Lim Ho-seop from CJ O Shopping broadcast contents team, and Kim Byeong-phil, the head of CJ Foodville's Food Service Lab. This event was also very special to those mentors because they had previously been able to closely witness all the efforts and
growth of the Dream-Up Students. 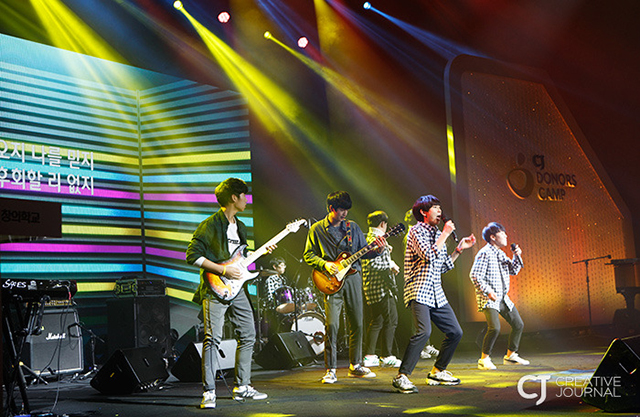 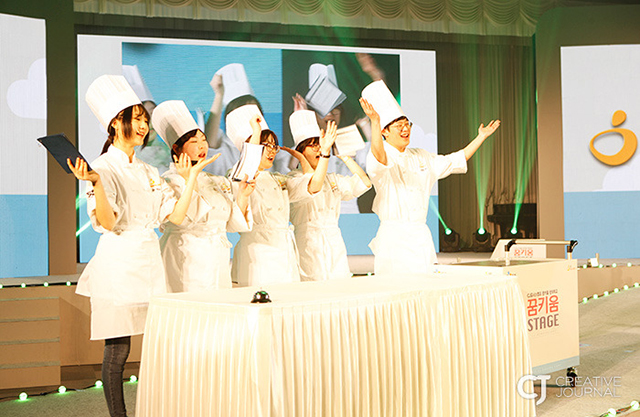 For students who freely displayed their own talents on stage, the most important factor that they are able to look back on is that they did it all together with friends sharing the same dream. A distinct sense of sincerity could be experienced upon seeing them sing with one voice and dancing together as a group.

Their passion and enthusiasm were also appreciated by their mentors. Whenever each performance finished, mentors would be quick to offer words of encouragement to the students, before reflecting on any points worthy of critique. 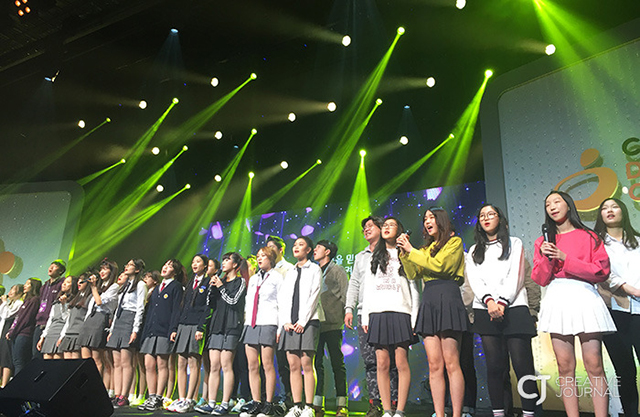 Today was the day for Dream-Up Students to shine. They appeared somewhat nervous just before coming on stage, but they rose to the challenge and exhibited their talents to the fullest once the stage lights came on.

Although the performance was meaningful in that the 3rd class of students in Dream-Up School was able to see all the fruits of their labor, the more important meaning was that they could share their dreams and work in harmony with each other in order to realize them.

The Dream-Up Stage hosted by CJ Donors Camp Dream-Up School finally came to an end. All the beautiful moments that were had over the two days will remain forever in their memories. In addition, the end results of their hard work will act as encouragement for the students and guide them on their own way towards their dreams.