Only old-timers would describe Korean food with bibimbap as a prime example.

The world is seeing the emergence of new,

A new kind of Korean food has emerged

Korean food is considered to be excellent food
made with care, often through the intricate process
of fermentation. However, despite being healthy and
having depth, Korean food has often been belittled
as cheap food compared to Western food and has
also been relatively less known compared to Japanese
and Chinese food.

However, Seoul's Korean food scene has been
undergoing changes lately.

A new, creative generation of chefs who have experienced diverse cultures are adding a sense of artistry to the
traditional merits of Korean food and, as a result,
Korean fine dining has emerged, offering modern Korean food that is course-based and high-end.
And this new kind of Korean food is gaining increasing popularity both in South Korea and overseas.

which constitute the core
of Korean cooking,
each dish, fascinatingly designed
and created
with sophisticated techniques,
offers a new taste
and experience.

not much food is
put on each plate,
and while showing respect
for the essence and
philosophy of Korean food,

that contains the chef's own story
that unfolds like a stylish novel,
plated in a manner that evokes
the art of blank space;

This is modern Korean food that breaks free from the notion of blindly sticking with old traditions and adds values
that reflect the present age in a neat, organized manner, transforming the familiar
into a new form that can be enjoyed by even more people.

The emergence of this new kind of Korean food was accelerated with the introduction of the owner-chef concept,
and it became more widely known after 2016 with the public's increasing interest in fine dining,
which is traceable to the Korean edition of the Michelin Guide, the magazine's 28th official world edition.

Now, let’s take a look at some new Korean food, which presents a new way to enjoy Korean food with course-based,
high-end meals while at the same time proudly spreading the exquisiteness of Korean culture throughout the world.

When you first encounter modern Korean food that is so artful you feel reluctant to eat it right away,
you will probably ask yourself out of curiosity, "Is this Korean food or Western food?"
However, once you have tasted it, you will have no choice but to be amazed by the experience,
telling yourself, "Oh, I didn’t know Korean food could look like this!"

Curious to experience a new world of Korean food? 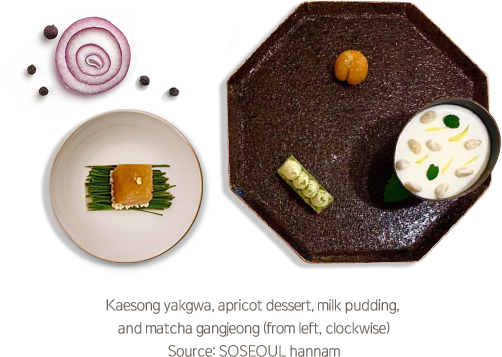 If you are looking for Korean food that can impress not only
Koreans – who will be immediately reminded of homemade
meals or Korean table d'hote upon hearing the words
'Korean food' – but also foreigners who have never tried
Korean food before, make a visit to modern Korean fine dining
restaurant, SOSEOUL hannam.

Please yourself by eating a compelling, novel-like meal teeming
with the chef's unique personality at this restaurant, which serves not only as a place to eat
but also as a place to have new experiences.

“What I care about the most is to express the taste of Korean food
in a modern way while preserving Korean food's inherent taste and philosophy.
I hope our restaurant will become a place
where people can experience Seoul's sophisticated culture of enjoying healthy,
seasonal ingredients in a new way,
rather than eating food made using familiar ingredients in the usual way.”
Korean fine dining restaurant SOSEOUL hannam chef Eom Tae-cheol
12
Vol.