K-Food is the hottest trend of the moment!
K-Food is captivating the taste of global citizens with an easy and fun,
differentiated localization strategy. The world has gone crazy for K-Food!

Since The Independent, a British newspaper, introduced K-Food as being one of the hottest food trends for 2016 earlier this year, the world has paid attention to K-Food. Bibimbap is emerging as a nice lunch among French people, who value health, and YouTube videos on K-Food are now getting lots of hits, including Mark Wiens, a famous YouTuber, who recently visited Korea for two weeks to experience Korean food. bibigo, a K-Food brand, advanced into the streets of Soho in London back in 2012 for the first time in the industry, and were recommended in Michelin Guide for three years running. Chrissie Walker, the president and editor of Mostly Food and Travel Journal of the UK said, "I think K-Food is very interesting and attractive. It has a wide range of seasonings, tastes and shapes. I think K-Food is more competitive at the moment than any other food in Asia and the world," stressing the unlimited potential of K-Food. 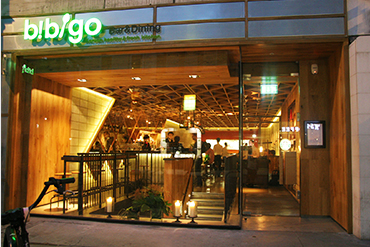 In 2012, bibigo became the first K-Food brand that advanced into the streets of Soho in London. (Above)
In America, an arena of countless restaurant chains, K-Food is captivating the taste of people of various races and ages. (Left)

You can't also speak of K-Food without mentioning the popularity of K-Food in the U.S. In the 2013 LA Street Food Fest, bibimbap created a sensation (Watch this video) and First Lady Michelle Obama uploaded a post about her kimchi making. It is no exaggeration to say that K-Food, great in both taste and nutrition, is spreading throughout the world. CJ also played its part in this phenomenon by striving to promote the genuine value and excellence of K-Food in the world. Soon enough, we will be able to see people of the world enjoy K-Food at least once a week. 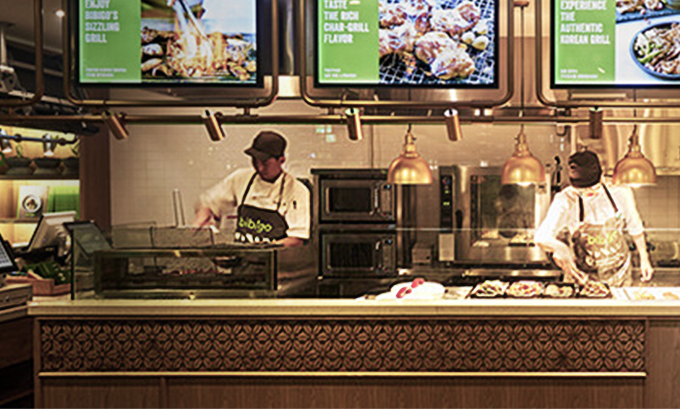 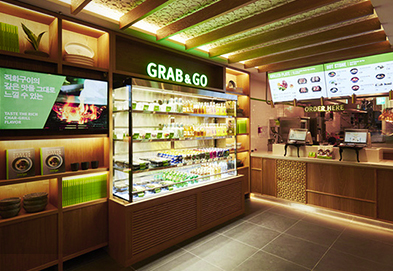 In the bibigo Fast-Casual restaurant in Seoul Square, you can enjoy nice food easily.

The existing Korean food that was available was difficult and challenging for foreigners. How to eat Korean food involved a learning curve and ingredients written in Korean on the menu were not easy to figure out. To evolve Korean food into K-Food, it should be easily accessed by everyone. bibigo's Fast-Casual Restaurant opened at Seoul Square, which is always full of people including many foreigners, is a kind of pilot restaurant designed to launch an era of K-Food fast food.

As a bridge between fast food and family restaurant, the restaurant heartily cooks foods with functional ingredients to guarantee the quality of food and serves them fast when customers place an order just like in a fast food restaurant. You can choose to eat in or take out at any time. Located in Incheon International Airport, one of the world's largest international airports visited by over 50 million people a year, "Season's Table" serves foreigners not only K-Food tables but also Korean street food, such as Tteokbokki (spicy stir-fried rice cakes), fish cakes and sweet Korean pancakes. In addition to these, various kinds of simple food products such as cupped rice and seaweed snacks, which are becoming more and more popular abroad, are all making K-Food more familiar to foreigners just like food found in convenience stores.

bibigo, which opened at the Westfield Culver City mall in LA on August 5, attracted locals with its concept "Build-Your-Own Bibimbap". With the influence of K-Culture, now everybody knows that K-Food is functional and delicious. Now what if fun is added to K-Food? Based on an understanding of American culture where people want to freely reveal their personality and taste and be respected for them, bibigo promoted the concept of bibimbap, which you can eat by adding whatever ingredients you like. With bibigo, consumers can select rice (white rice, brown rice, or kimchi rice) and ingredients (bulgogi, beef, garlic chicken, spicy pork, organic, grilled veggies, or meatballs) with sauces (Korean spicy sauce, sesame sauce, or citron soy sauce) and make bibimbap as they desire. bibigo also developed an interesting catchphrase - "We Make It Fresh + You Make It Bold". This naturally leads to an understanding of the ingredients and combination of K-Food through enjoyable experiences involving K-Food. bibigo also conducted some events in connection with KCON 2016 LA: it held a selfie event for performance tickets and a K-Food event using a bibigo truck where visitors could experience various K-Food menu selections they wanted to taste, including dumplings, sweet and sour chicken and bibimbap. Through all these efforts, K-Food is growing as an interesting cultural phenomenon along with K-Music. 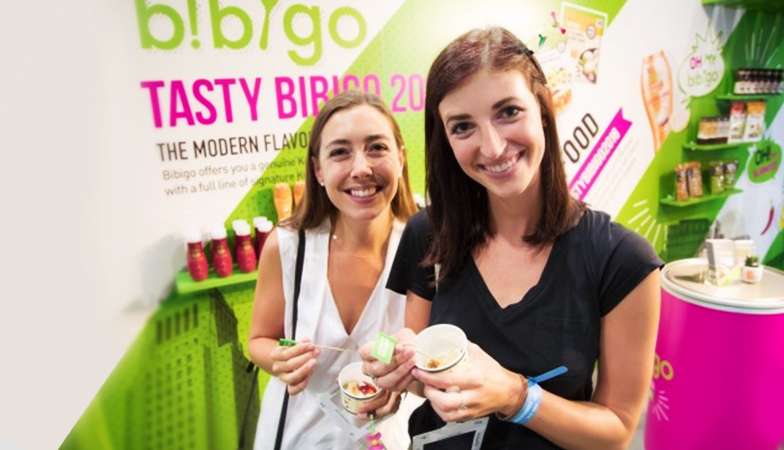 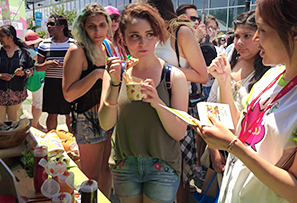 The bibigo show held at KCON 2016 LA, along with K-Music, helps demonstrate that K-Food is growing as an interesting global cultural phenomenon. 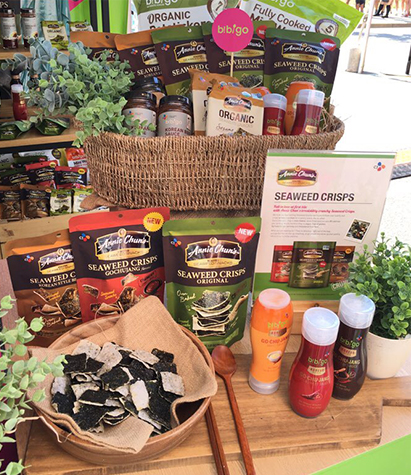 K-Food as a snack

bibigo Seaweed Snacks differentiated to satisfy the taste of foreigners is widely loved as a functional snack.

The secret to captivating the taste of foreigners, who may be more apt to refrain from unfamiliar foods, was "differentiated taste". bibigo Steamed Dumplings is the perfect example as it is the best-selling bibigo item in the U.S. Successfully differentiating its products from Chinese dumplings, which were dominating the U.S. market, bibigo grew last year as a brand with sales of over 100 billion won. bibigo fervently sought to spread "Korean dumplings" throughout the U.S. market on the strengths of them being deeply tasty and highly functional. Its thin skin and veggie-filled stuffing became a new trend as it satisfied the needs of Americans, who are increasingly seeking to eat healthy and functional foods. bibigo Organic Potstickers with its skin made of wholegrain also captivated the taste of Americans, who are sensitive to calories. With such a differentiated taste of dumplings, bibigo successfully impressed a new brand of "K-Dumplings" on Americans who were only accustomed to Chinese dumplings until now. It is also important to continuously promote the new taste and culture of K-Food with simple snack products. Another result of such efforts is bibigo Crispy Seaweed Snacks, which is made through oven baking rather than frying based on the world's first technology use for connecting rice chips with seaweed. With the concept of a functional snack free from gluten, saturated fat and cholesterol, bibigo Crispy Seaweed Snacks offered global citizens with a "different" way of enjoying "seaweed (dried laver)", which was somewhat unfamiliar to them.

Rule 4. Be Local!K-Food that reflects your taste

The most important factor that made K-Food popular among global citizens is the localization effort based on an understanding and adaptation to different cultures. bibigo released a chicken version of bibigo Steamed Dumplings, which uses chicken stuffing, for those who can't eat pork, as well as a version with coriander, which is preferred by Southeast Asian consumers. That's why bibigo focused on its "Hatban Cupban" rather than "Hatban" in consideration of the dietary habits of foreigners who prefer a single bowl of food unlike Koreans who prefer eating rice along with side dishes and stew. Hatban Cupban, which has made its way into a total of 38 countries, including the US, Russia, Japan, Hong Kong and China, attained overseas sales of approximately 2 billion won in the first half of this year. Russians, who love eating simple meat soups due to the cold weather, are exhibiting a sensational response. Monthly sales of the product, particularly in cold regions such as Sakhalin and Vladivostok, are growing by over 20%. bibigo also successfully proved its distribution strategy in Hong Kong, which is to sell Hatban Cupban in convenience stores such as 7-Eleven in consideration of the dietary habits of Hong Kong citizens who prefer quick and easy meals for both lunch and dinner that they can eat while they are out and about. In Japan, where the reputation of K-Food is more widely known, bibigo used a different approach by releasing bibigo Korean Meal, which emphasizes the identity of K-Food.

Hatban Cupban is released differently for each country to reflect their different cultures, tastes and dietary habits, and has found great international appeal.

In this way, it is possible to make products that capture the taste of locals only by carefully observing and studying the culture and taste of people in different countries. For example, bibigo snack menus vary depending on the country: bibigo released "Gangnam Fried Chicken" and "Tin Pot Ramen" in London, considering their interests in K-Music, "Chimaek (Fried Chicken & Beer) Set from Gangnam, Korea" in China, where people are crazy for Korean drama "My Love from the Star", Tteokbokki and deep-fried sugar-glazed sweet potato wedges in Singapore where people are familiar to overall K-Culture, and Korean shaved ice dessert in Indonesia with its tropical climate. With such an appealing and differentiated localization strategy, K-Food is evolving into everyday food for people of the world.

K-Food as an everyday food
for people of the world