People of the world loving Korea

To listen to K-Music is to love it, and the love fans around the world have for K-Music has led to a growing interest in and understanding of K-Culture as a whole, ranging from film to TV drama, fashion, and even food. In short, K-Music is changing the lives of its fans.

"I've started taking Korean lessons and, even though the classes are over,
I plan to keep learning. K-Pop has been a great inspiration for me."
- Anna Crow ‏@Annananabatman2

"Since we became K-Pop fans, one of our dreams has been to visit South Korea.”
- Retno ‏@spargyu13 Source: DailyMotion (fdesouche.com)
Enthusiasm for K-Culture is shown by the long line of French K-Music fans queuing for KCON 2016 France, and the video clips of them experiencing K-Culture such as K-Food.

The global fascination with K-Culture instigated by K-Music is best exemplified by KCON, a festival the French website Fdesouche (fdesouche.com) describes as “a unique opportunity to learn about the South Korean culture and the Land of Morning Calm.” KCON capitalizes on the global popularity of K-Music and introduces fans to K-Food, K-Drama, K-Fashion, and other aspects of K-Culture. Serious Eats (seriouseats.com) wrote, “Bulgogi has become the go-to dish for food lovers, and Korean barbecue is a popular dish that can be found in every major city. Furthermore, kimchi has become the new miso soup." Korean food has become a significant global trend in its own right, resonating The Guardian article’s title South Korean festival hits London – everything from K-Pop to kimchi. There are even fans who post selfies on Instagram of them eating kimchi and rather enjoying its pungent flavor. Kimchi, it seems, is now very cool.

Imagine and dream.
The world will change
as you wish.

Can’t Get Enough of K-Culture

"If you try hard enough, everything will be fine."
- Tae Min (SHINee)

"Imagine and dream. The world will change as you wish."
- Woo Hyeon (INFINITE)

In some ways, it’s only natural that K-Music fans have taken an interest in other parts of K-Culture. A key element of K-Music today is a constant exposure of the more casual and intimate sides of K-Music artists via reality shows, talk shows, and practice videos uploaded on YouTube. A part of the explanation for the explosive growth of K-Music fandom in recent years is this intimate connection K-Music artists have with their fans. The glimpses they get of the private lives of their favorite K-Music artists encourage fans to find out more about the food they eat, the places they visit, and even the TV shows they talk about or make appearances on and to discover the dynamic and progressive nature of K-Culture. 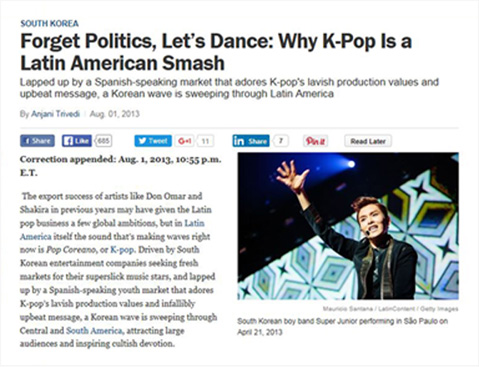 In Latin America, the leading the Spanish-language music market
where artists such as Shakira have gained popularity, K-Music has now
emerged as a new interest thanks to the perseverance and passion
of K-Music artists.

Time magazine ran an article headlined Forget Politics, Let's Dance: Why K-Pop Is a Latin American Smash in August 2013 and in it described that the humility, passion, and positive energy shown by K-Music artists inspire South American youths suffering in the aftermath of a financial crisis in the region to dare to dream. A clear case of this is the video of Girl Friend’s live performance, where the girl group members stumble and fall on a rain-soaked stage eight times but continue to perform. The video has received more than 11 million views.

K-Music fans also love to share via social media inspirational quotes from their favorite artists, such as “I have no talent. That's why I work hard" by 2ne1’s Sandara Park and "Imagine and dream. The world will change as you wish" by INFINITE’s Woo Hyeon. According to French economist Patrick Messerlin, the values expressed by K-Music artists represent the spirit of Confucianism

What is Your
K-Culture Wish?

Source: RISIN’CREW Youtube
Fifty five members of France-based dance
crew RISIN' CREW, known for covering
K-Music choreography, perform the dance
moves of "Good Boy" by BigBang at a large
square in France. This group is a great
example of the world's interest in K-Music.

"Their music relaxes and inspires me. K-Pop makes me feel comfortable.”
- Aki ‏@OhUjiKook

"K-Pop is not just music. It's a lifestyle."
- Anais ‏@AnaisBernadas 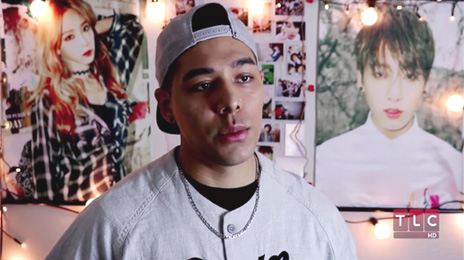 Source: YAKU Youtube
A lighthearted video by K-Music fan Yaku, living in Texas,
USA, which is entitled "K-Pop is a lifestyle | my strange
addiction." Check out how his “strange addiction” to K-Music
affects his everyday life. 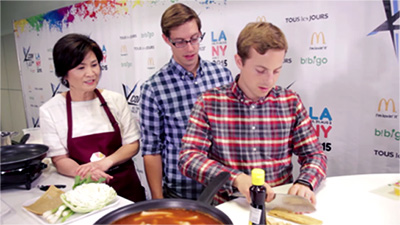 Source: BuzzFeedVideo Youtube
Korean food bloggers cook Korean food such as Tteok-bokki,
stir-fried rice cake, gimbap, and rolled rice with laver, with
Americans at KCON, showing that everything from K-Music
to K-Food, is being shared and enjoyed around the world.

As K-Music continues to find its way into the lives of more and more people around the world, an increasing number of fans are now listening to K-Music on a daily basis and taking an interest in various other aspects of K-Culture. K-Music fans often speak of how much their life has changed thanks to K-Music. Twitter user Anna Crow (‏@Annananabatman2), for example, says K-Music inspires her and is the reason why she decided to learn Korean. Another Twitter user Arabelle (‏@arabyrxn) stresses, “K-Pop makes me push harder and dare to dream.” K-Music fan Yaku confesses in a humorous YouTube clip titled K-Pop is a Lifestyle | My Strange Addiction that he downloads about twenty K-Pop tracks a week and spends nearly $960 on K-Pop digital tracks every year. He also says his daily life revolves around K-Pop and declares it as a lifestyle.

It’s not difficult to see how much influence K-Music has on people all over the world. There are now numerous websites, such as kworldstyle.com and kfashionista.com, that are dedicated to the fashion aspect of K-Culture, providing coverage of what K-Music artists wear on stage, in their music videos, and when they travel even. Through sites like kworldstyle.com and shewearskpop.tumblr.com, fans can buy the same clothes their favorite K-Music artists wear. kfashionista.com has sections dealing with hair styling and makeup choices of K-Music artists in great detail, and there is even a popular video contest that invites fans to upload videos of Korean food. As reported by CNBC on June 9, from K-Pop to fried chicken, K-Culture has become a global trendsetter

Countless K-Music fans, including Twitter user Reed_62423, think K-Pop has raised our standards on food, fashion, and everything else. With their unique takes on existing forms of music, professional performances made nearly perfect through countless hours of practice, and positive energy that can embrace it all, K-Music has garnered countless fans for itself and K-Culture as a whole throughout the world and become a unique lifestyle. The day when people all over the world watch two to three South Korean films a year, eat Korean food once or twice a month, watch one or two episodes of South Korean drama a week, and listen to one or two South Korean songs a day isn’t far away.

K-Music is a lifestyle.