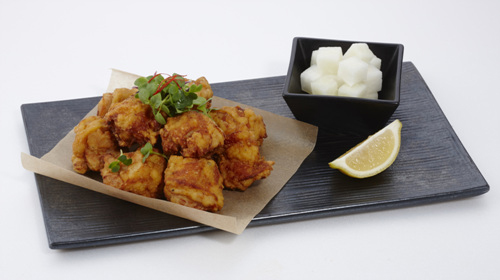 With the excitement around the Korean TV drama ‘My Love from the Star’ reaching fever pitch, Korean snack menus have won new fans. This added popularity has seen CJ Foodville’s bibigo launch a new snack menu.

bibigo (www.bibigo.com) released its new menu “Chimaek set from Gangnam” for its restaurants in China. The menu was created based on the best-selling chicken menu at bibigo London, the restaurant that featured in the Michelin Guide London.

The menu was introduced when a Korean hit TV drama portrayed the heroine eating Chimaek (a word combining fried ‘chicken’ and ‘maekju’ (beer). With the popularity of the TV drama and the growing interest in Korean food culture such as having chicken with beer, bibigo’s Korean food menus have been receiving a favorable response.

The Chimaek set from Gangnam at Chinese bibigo restaurants was created based on ‘Gangnam Tong-Dak’ at bibigo London. Bibigo Soho in London introduced fried chicken as the most popular nighttime snack in Korea and released the ‘Gangnam Tong-Dak(chicken)’ menu last December. The fried chicken menu at bibigo London is served with cubes of radish marinated in vinegar as in the original in Korea, providing a chance for Londoners to enjoy authentic Korean tastes. bibigo London also released ‘Ramyun’ in a pot, allowing Londoners to enjoy Ramyun, Korea’s favorite snack with over 30 million bowls of Ramyun eaten every year in Korea alone. ‘Ramyun’ and ‘Gangnam Tong-Dak’ are growing in popularity, ranking in the top ten menu items sold at the bibigo London restaurant.

This is not the first time that bibigo has infused Korean food with aspects of the Korean wave (Hallyu). bibigo launched Rice Cakes and Sweet Potato Mattang in Singapore, a country already well familiar with Korean cuisine through Korean TV dramas and movies. bibigo’s Korean style dessert, bibigo Ice Flakes, has won admirers in the tropical country of Indonesia.

A person from bibigo said, “China, Singapore and other Asian countries have a strong preference for Korean cuisine as they have been influenced by the Korean media. In Britain, there is strong interest in K-pop thanks to ‘Gangnam Style’. bibigo will make the most of this opportunity to promote Korean cuisine and spread K-food in the Korean wave.”