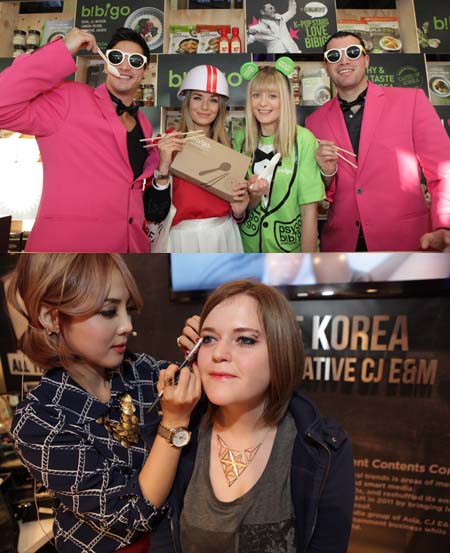 The event took place in London offering an opportunity to create sustainable and value-added growth across the Hallyu ecosystem.

CJ Group said that it took a part in the 4th Korea Brand & Entertainment EXPO (KBEE) 2013 in Old Billingsgate, London from Nov. 4 to Nov. 6. KBEE2013 is a testing ground for Hallyu’s economic feasibility in Europe. By combining Hallyu with key business sectors including makeup and fashion, food, design, and entertainment, KBEE2013 aims take the global interest in Hallyu one step further by connecting it with industrial demand.

CJ Group has recently run and expanded its food, film, and entertainment businesses in Europe, including Britain. Throughout KBEE2013, CJ Group tested the waters for potential growth opportunities with its E&M and bibigo booths laid on to showcase a CJ-style business model that combines Hallyu contents with various industries.

A leader in the global Hallyu business, CJ Group developed its global business strategy based on the following virtuous circle, centered on Hallyu: expanding interest and attention in Hallyu contents leads consumers to try out and experience Hallyu products, which in turn leads to familiarization with Korean culture on a day-to-day basis, reinforcing that initial interest in Hallyu contents. CJ Group has applied this insight to its global marketing and branding strategy.

CJ’s E&M booth was instantly recognizable in the middle of the exhibition hall at KBEE2013thanks to the crowds of visitors who gathered around, drawn by their favorite K-Pop tracks being played. K-Pop is quite popular in the UK and the fans who were drawn to the booth couldn’t help but dance as the songs of 2NE1, G-Dragon, f(x), and SHINee were played. CJ also sought to widen their interest in K-Pop music to K-Contents more generally by playing the trailers of ‘The Flu’ and ‘Snow Piercer’ at the booth. They got a positive response as many K-Pop fans inquired at the booth about the movies’ release schedules and main actors.

The booth was teeming with visitors during the Makeup Show with young British women learning the makeup tips of K-Pop stars like 2NE1, 4Minute and Sistar. Their great interest in K-beauty was obviousfrom the get-go, as they bombardthe stars with questions on cosmetic brands, the best shops to buy the products at, and which makeup tools they used, as well as any makeup tips they could offer.

The popularity of CJ’s bibigo booth soared from the start of the event to such an extent that its bibimbap lunch boxes were sold out in less than two hours. True, bibigo had expected a high turnout of visitors to the booth due to the recent positive review of bibigo Soho in London by the Michelin guide, published in October - which was the first for a branded restaurant. bibigo prepared mandoo salad and bibimbap samples as well as a total 1,000 lunch boxes packed with bibimbap, bulgogi, and Chicken gangjung for sale, but come 2 pm and all had sold out. Visitors visiting the bibigo booth had to return empty hands. British consumers who experienced bibigo’s menu asked about the purchase of bibigo’s processed foods, including sauces, mandoo(dumplings), and gim (dried laver), or on the recipes of the dishes, once again demonstrating a keen interest in Korean food.

A person from CJ Group said, “We had been slightly concerned about the potential of a business model that combines Hallyu with the food, makeup, and fashion industries, especially in the UK given that Hallyu here is still at its early stages. The strong support we have enjoyed has been a pleasant surprise. We will keep working on developing a creative business model to grow Hallyu into a ‘Made-In-Korea Brand’continuously.”

Meanwhile, the official opening ceremony of the event started at 10am on Nov. 5 with the opening speech given by Oh Young-Ho President of KOTRA. Among the captains of Korean and British industry and culture present to celebrate the significant event, there were Yoon Sang-Jick Minister of Trade, Industry and Energy, YooJin-Ryong Minister of Culture, Hong Sang-Pyo President of KOCCA (Korea Creative Contents Agency), Lee Chea-Wook Vice Chairman of CJ Group, Vince Cable the UK Deputy Minister for Business, Innovation and Skills, and Ed Vaizey UK Deputy Minister for Culture, Communications and Creative Industries. 2NE1, as the appointed ambassador of the event, gave a great performance to celebrate the event as part of the second half of the opening ceremony, which only added to the convivial atmosphere of proceedings.