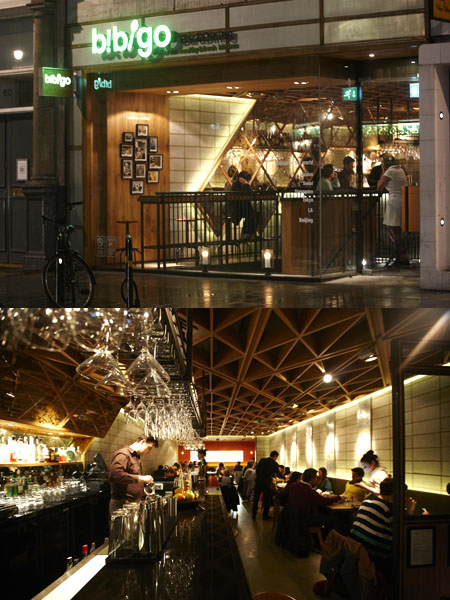 bibigo has put its full weight behind promoting Korean cuisine throughout the world. Its efforts are paying off, with bibigo making it onto the list of the prestigious Michelin Guide. This is expected to be the starting point for bibigo to promote the charm of Korean cuisine to gourmets as well as the global public more generally.

CJ’s global Korean cuisine brand bibigo (www.bibigo.com) announced on Oct. 7 that bibigo Soho in London had made it into the 2014 Michelin Guide London.

The fact that bibigo is listed on the Michelin Guide is highly significant because it is the first time for a brand restaurant launched overseas by a Korean company to make it onto the hallowed guide’s pages, and is testament to the soaring popularity of Korean cuisine and the recognition it is now receiving throughout the world, for instance, with Jung Sik Dang in New York earning two Michelin Stars.

bibigo has spearheaded the promotion of Korean cuisine and food culture throughout the world by entering into six countries over the last three years since its launch in 2010. bibigo has grown into an integrated Korean food brand covering everything from restaurants to processed food in overseas markets. bibigo has also made every effort to promote Korean cuisine through a range of marketing activities, including a campaign featuring the world famous singer Psy.

The listing in the Michelin Guide of bibigo Soho in London follows a series of notable achievements. bibigo opened its Soho restaurant in July 2012 to coincide with the opening of the London Olympic Games as a way to attract British gourmets amid direct competition with a number of popular and high-end restaurants already located in Soho. bibigo Soho brought something fresh: it introduced a concept of bar and dining differentiated from other bibigo restaurants as a way to attract more British customers familiar with pub culture. What’s more, the new restaurant features a fancy, Korean style interior, with a wine list recommended for each Korean dish, and brings a variety of Korean liquors such as ‘Soju Cocktail’.

In addition, bibigo has improved the quality of Korean dishes, in many cases updating their names to make them more familiar for British customers. For instance, Korea’s popular food ‘Soondae’ was introduced as ‘Black Pudding’ and ‘Boongeo Bread (a fish shaped-bread stuffed with red bean paste)was turned into a fancy dessert ‘bibigo Goldfish’. The attempt to maintain the authenticity of the Korean dish while still making it easier for British customers to understand and approach them has received a good response. Such efforts have led to a feature article on bibigo and Korean cuisine by the influential British newspaper The Independent, prior to the restaurant’s listing in the Michelin Guide.

Moreover, bibigo has held a variety of events outside its restaurant. The president of the London Organizing Committee of the Olympic and Paralympic Gamesand 300 VIPs were invited on July last year for bibigo’s Korean banquet at Victoria & Albert Museum, with bibigo’s food demonstration booth serving bulgogi, mandoo (dumplings) and bibimbap at London’s famous Thames Festival. Bibigo also ran Food Trucks for its processed foodatTesco’s, Britain’s largest supermarket chain, carrying out a range of promotional events and food sampling events. Its efforts have paid off, with bibigo now being stocked at 43 Tesco stores across Britain and it winning the Supplier of the Year last May, an award made to the supplier who has made the most notable contribution to Tesco’s business. All these show the efforts bibigo has gone to introduce and promote Korean food to British society.

A person from bibigo said, “We are very glad that bibigo’s diverse attempts and efforts to promote Korean cuisine reaped a tangible result of being reviewed by the Michelin Guide. We feel more responsible for promoting Korean cuisine to the world as the first Korean restaurant run by a large Korean company which is introduced by the Michelin Guide.”

[Reference] Michelin Guide
Starting in 1990, the Michelin Guide has two series; Red Guide reviews restaurants and rates them with a three-star system. Green Guide reviews and rates tourist attractions. Reviewers of the Red Guide select certain numbers of restaurants based on the quality of food, price, atmosphere and service and visit the restaurants five or six times a year without disclosing their identity. The exceptional restaurants of the visited ones are ranked with three stars (The best gets three stars.). Thanks to the rigorousstandards and reviewsby the Guide, restaurantslisted on Michelin Guide are already deemed to be qualified. Particularly, a restaurant and a chef rankedwith three stars receive the highest honor.

Next
bibigo opens its 4th restaurant in Singapore.