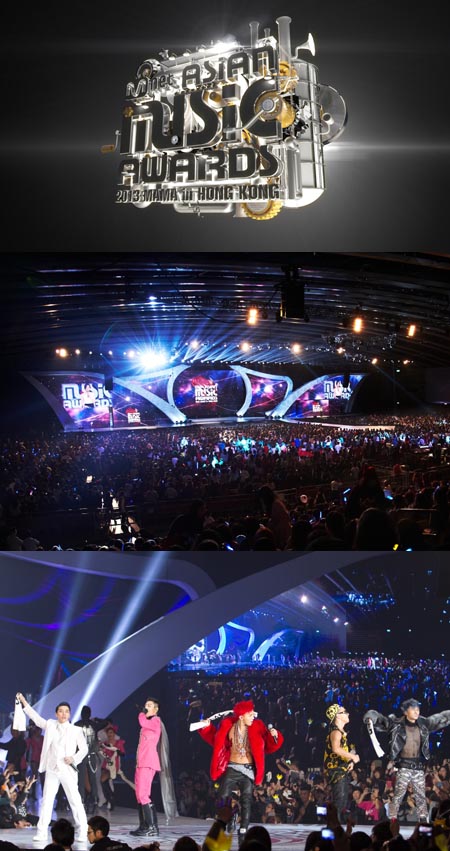 The Mnet Asian Music Awards (MAMA), Asia’s foremost music festival, is back this year, bringing and uniting the world through music. MAMA will be held in the multi-cultural Hong Kong on Nov. 22 (Fri), seeing off 2013 in style with a magnificent music festival after a year of waiting for music fans.

The venue of the music festival is Hong Kong’s largest indoor seated area, Hong-Kong Asia World Expo Arena (AWE), which has played host to the world’s top musicians including Justin Bieber, Lady Gaga, and Jason Mraz. MAMA will feature the leading Korean singers of 2013, as well as top musicians from other countries, meaning music fans from all around the world can close out the year in style.

2013 MAMA is bigger, better and more vibrant than ever before.

CJ E&M said, “This year marks the 5th anniversary of MAMA, which has already grown into leading Asia’s music festival, aping its inception as Korea’s domestic music awards. MAMA has cemented its position as a truly great Asian music festival which music fans not only from Asia but also from all around the world look forward to throughout the year. Mnet’s advanced production know-how in putting on successful music awards and music festivals over the last fifteen years, means that all the creativity and passion for music there is at Mnet can find a voice on a fantastic stage that makes everyone’s dreams come true. Mnet plans to produce a festival where artists and music fans gather and enjoy all together. In that sense, Hong Kong is the best place to hold MAMA because it has a locational advantage in that it’s fairly straight forward to get to Hong Kong from anywhere in Asia, which has probably helped make the city the hub it is today in Asian financial and logistics markets. Furthermore, Hong Kong is a multi-cultural place that accommodates a variety of Asian cultures.I hope everyone can join in looking forward to Asia’s largest and best musicfestival 2013 MAMA, which is taking place in Hong Kong this November.”

MAMA started as a music video festival of Mnet KM in 1999, but has already evolved substantially, growing through the rising popularity of the Korean music industry over the last ten years. The choice of Macau as host venue in 2010was in effect a very public declaration of the music video festival’s transformation into one of Asia’s best loved music awards? MAMA, centerpiece of all that’s good in the Asian music industry. This year’s event is taking place at the Hong Kong Convention Exhibition Center on Nov. 30 (Fri).

High critical praise has been heaped on the awards for the avant-garde creativity of the different performance stages and the wide variety of directions on displays, testament to the advanced stage system that Korea has. MAMA, which was conceived as a small-scale annual music awards in Korea, has already grown into Asia’s foremost music festival, a gateway to the Asian music industry and now in its fifth year.