CJ CGV Participated in KCON 2013 Hallyu Convention in the US. 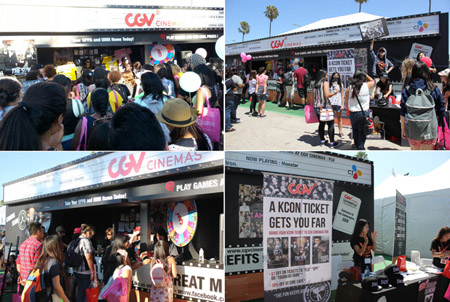 CJ CGVwas one of the highlights of KCON 2013 with its ‘CGV Mobile Cinema’ concept, consisting of a ‘Cinema section’ and ‘Events section’. KCON 2013 is an annual Hallyu convention which ran in the US on August 24 and 25 (local time), drawing more than 8,000 visitors during the two days of the event.

This year marks the second anniversary of KCON, the Hallyu convention hosted by CJ Group. KCON 2013 took place in Los Angeles Memorial Sports Arena in LA and was twice the size of last year’s event. Indeed, it has become the ultimate Hallyu festival, offering visitors a chance to experience a wide range of different aspects of Korean culture and products in cinema, music, food and beauty and fashion.

KCON 2013 was rich with various events including cinema, fan workshop, contest and even a Hallyu workshop. The widely supported two-day event was capped off by the concert of wildly popular K-POP artists like G-Dragon, f(x), Crayon Pop, EXO, Dynamic Duo, 2AM, and TEEN TOP.

CJ CGV kicked off KCON 2013 with a ‘Pre-KCON party’ and with a showcase of the hottest Hallyu contents at ‘CGV Mobile Cinema’, which became the de facto Hallyuhub of cinema. In fact, it was CJ CGV which opened KCON 2013 through its ‘Pre-KCON party’, which was held atCGV LA, its first theater in the US, at 6pm on August 23. As the new feature of this year convention, Pre-KCON party was a hot party place showcasing a CGV booth at KCON, and with a special stage for surprise guests such as DJ KOO to perform on. Fusing music and video artistry, the music videos of all the KCON 2013 line-up artists were played. With a popular VJ leading the party, it became a place in which all visitors could dance around and enjoy themselves. CJ CGV placed a sensational mobile cinema under the concept of cultureplex at which I AM, A Werewolf Boy, and Monstar were all played with English subtitles. What’s more, visitors got to check out the latest movies, dramas and show trailers from CJ E&M. CJ CGV’s Events section soon saw its popularity take off as word spread about the prize gifts on offer related to K-POP and movies to the winners of events such as Wheel of Fortune and Bingo.

CGV Mobile cinemareceived an enthusiastic response from audiences. The three films played were all sold out and drew both cheers and tears from viewers. The popularity of A Werewolf Boy was particularly outstanding. The number of people who came to watch the movie were three times the number of seats prepared in the auditorium and thus many of the audience had stand through the movie. DVD sales of A Werewolf Boy at the CGV booth set a record high, and it is said that some even bought several sets of the DVD. A visitor who visited CGV booth two years in a row since last year said, “I was excited to enjoy the sheer variety of Korean pop culture on offer this year as more programs wereprepared than last year, like the Pre-KCON party. I watched a great movie, A Werewolf Boy, today. I’m really looking forward to the release of the next Korean movie. In fact, it’s fair to say I’m looking forward to seeing a whole lot of Korean films at CGV LA.”

Hwang Jeong-Hee, Marketing Manager of CGV America said, “CGV LA hosts a range of social events, including movie premier parties, red carpet events, previews, live performances as well as, of course, KCON. We plan to lay a firm foundation for our growth into a multi-entertainment spot and the hub platform of Hallyu through expanding our business in the US market.”

Next
CJ Foodville establishes a baking and pastry skill department in Vietnam.