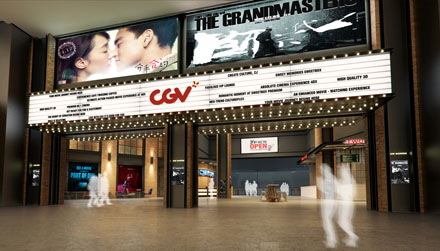 CJ CGV has opened its 20th theater in China, less than seven years after its entry to the Chinese market. CJ CGV opened up its 20th theater, CGV Shenyang Jinrongzhongxin, in Shenyang city, China on August 28. As the first Korean multiplex company to have entered into China back in 2006 through CGV Daning, Shanghai, CJ CGV currently operates 20 theaters with 151 screens in 13 Chinese cities including Shanghai, Beijing, Wuhan, Tianjin, Fushun, Shenyang, Panjin, Yantai, Ningbo, Haerbin, Wuhu, Zhongshan, and Changsha. CGV Shenyang Jinrongzhongxin operates ten auditoriums including special auditoriums of IMAX and Sweet Box and can seat 1,826 people, being located on the fourth and fifth floors of IFC in the Shenyang North Station commercial area, which is the heart of the central business district and a major transportation point.

The opening of CGV Shenyang Jinrongzhongxin is widely seen as a positive step for CJ CGV in developing its business in the Chinese market. Yielding about 45 billion won of revenue from its eleven theaters in China, CJ CGV has a target of 100 billion won of revenue, more than double that of the previous year from. Total 16 theaters are planned to open within this year including recently opened 9 theaters.

According to the rank of theater operator in China released by EntGroup, China’s entertainment research service provider focusing on the film industry, CGV China was placed 22nd as of the end of 2012 (1.2％ of Box Office market share) and grew to 18th as of June 2013 (1.6％ of Box Office market share), showing strong growth. In fierce competition with over 3,200 theaters in China, CJ CGV has been emerging thanks to its effective differentiation strategy based on ‘cultureplex’, ‘special auditoriums’ and ‘mutual growth’.

First of all, CJ CGV introduced ‘cultureplex’ paradigm to China rather than in other global markets, creating a cultural complex space based on premium service where visitors can enjoy a variety of cultural events other than films. For example, CGV Beijing Indigo, China’s first cultureplex, creates a CJ cultural complex inside Indigo Mall with CJ Foodville’s representative brands like A Two Some Place, bibigo, and Tous Les Jour, suggesting a lifestyle of enjoying films as well as foods in one space and putting the company at the forefront of entertainment trends in China. It also provides its Chinese employees with service training at CGV Korea to internalize service mindset as customer-friendly service, a largely unfamiliar concept for a communist country.

Moreover, CGV’s special auditoriums are differentiated competitiveness. CJ CGV needed to build a cohesive rationale for watching a movie at a theater when China is flooded with illegal pirate copies of recent Hollywood blockbusters. Thus, CJ CGV has completed a strategic alliance with IMAX, which is the most popular auditorium with special features in China, and introduced Chinese audiences ‘4DX’, the world’s pioneer of ‘all-five-senses’ experience, the premium auditorium ‘Sweet Box’, and the vibrating seat ‘Beat Box’.

CJ CGV’s efforts for mutual growth are vital to the company’s success. CJ CGV held a signing ceremony in June for the establishment of the China Friendship Foundation for Peace and Development - CJ CGV Harmony Fund (hereinafter referred to as CJ CGV Harmony Fund), with one of the foreign affairs organizations of the Chinese government, Chinese People’s Association for Friendship with Foreign Countries. CJ CGV Harmony Fund was established for the purpose of improving the environment and knowledge of culture and education for children of the workers who are the hidden players behind China’s development. The fund will provide 3 million renmibi for the next five years. CJ CGV has also hosted its cultural contribution program ‘ToTo’s Showroom’ every year since 2011. It selects schools for children of the workers in the regions where CGV has a theater and supports a renovation of their school. It also carries out a range of programs for mutual growth including a scholarship for those with artistic talents and academically excellent students. In addition, CGV runs a K-Pop music camp to offer a chance of experience Korean pop culture.

A spokesperson for CJ CGV said, “Our 20th theater in China will lay a firm ground for us to engage in full-scale competition with a number of multiplex brands in China. Based on our differentiation through cultureplex, special auditoriums and mutual growth, CJ CGV will strengthen its position in China to make it as a strategic point for global expansion and grow as a cultural contents and platform provider.”

Next
CJ CGV Participated in KCON 2013 Hallyu Convention in the US.