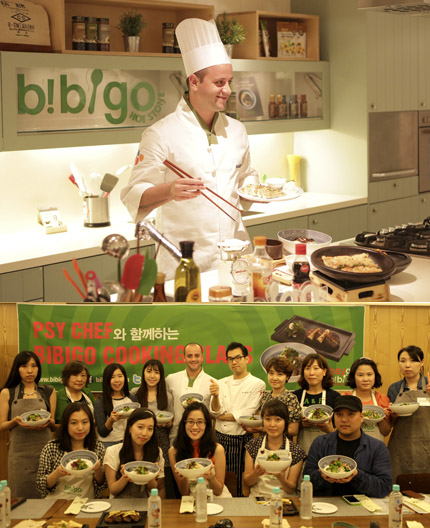 Psy Go bibigo is a global campaign launched by bibigo to introduce Korean cuisine to the world along with world famous singer Psy, taking a more friendly approach. As part of the campaign, bibigo has recruited chefs since April 13th, through its campaign webpage (www.psygobibigo.com) and on Youtube, to go on world tour with Psy for a month to promote Korean cuisine.

The recruitment advertisement released on Youtube attracted attention from around the world, hitting over 10 million views within a month. Fighting through a fierce 350 to 1competition, Brazilian chef Ricardo Soares Martins S. Menezes became the winner on the 18th. Ricardo has gained growing popularity in Brazil through reporting in dozens of local media outlets for his promotion of the campaign and quality of Korean cuisine on SNS while applying to be Psy’s chef.

Before starting the world tour, Ricardo will receive a week of basic training on Korean food to have better understanding of Korean cuisine, Psy’s favorite Korean recipes, including Bulgogi and Bibimbap, and traditional Korean sauces such as red pepper and soybean paste. He will also attend a cooking class where he will cook bibigo’s popular dishes with invited ‘Korean Food Promoters’ who have eagerly promoted Korean cuisine via SNS. Korean chef Kwon Woo-Jung will be in charge of the cooking class and all other training, to provide an intensive and specialized skill set on Korean cuisine.

After completing training, Ricardo will accompany Psy on his world tour and promote Korean cuisine by providing Korean food catering and lunch boxes to celebrities and other participants in the events, and by running a promotional food truck for locals at unexpected times and places.

A source familiar with bibigo’s campaign said, “A number of Korean food promotions with Psy have been gaining positive response in the overseas market, such as the ‘Psy Go bibigo Party’ where customers were invited to try K-pop and Korean food at bibigo restaurants outside Korea. We believe the addition of Ricardo will boost the campaign even further. bibigo will continue carrying out a range of activities to promote Korean food in more friendly and interesting ways during the campaign.”

Next
TOUS les JOURS opened up its first bakery in Malaysia!

Previous
CJ will hold KCON 2013, the first Korean Wave Festival in the US