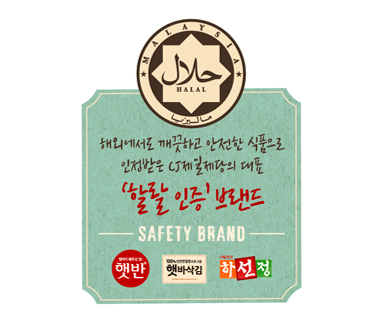 CJ Jeiljedang has acquired a certificate of ‘Malaysia JAKIM Halal’ which is necessary to export goods to Islam area where 1.8 billion of population are living together. ‘Halal’ means ‘Allowable” for Arab language and Halal certificate is only given foods and industrial products which are butchered, treated and processed by Islam Laws so that Muslim can eat and use them.

The certified products of CJ Jeiljedang include a total of 30 products such as Hetbahn, seasoned laver and Kimchi. CJ Jeiljedang intends to achieve 10 billions of sales for this year and 100 billions of sales within next 5 years by focusing on Halal food market whose volume is 650 billion Dollars that falls on approximately 20 of world food market. For this purpose, CJ Jeiljedang is schedule to attend ‘2013 International Halal Showcase(MIHAS)’ which will be held at Malaysia from 3th of next month to 6th and active introduce superiority of Hetbahn and Kimchi for local buyers and consumers focusing market expansion. CJ jeiljedang has a plan to focus not only on Muslim but also on non-Muslim consumers for entering Halal food market. It’s because Halal food has been popularized with its clean and safe food image and its consumption by non-Muslim population has increased by 25 of total volume. CJ jeiljedang, primarily based on Malaysia and other Asian countries, will extend sale markets not just into Islam countries but also Europe, America and other countries where the population of Muslim is increasing.

As the certificate of ‘malaysia JAKIM Halal’ that is acquired by CJ Jeiljedang is the most strict and difficult Halal certificate indicating world best level, CJ products are expected to get high popularity as ‘Reliable and superior products’ For this certificate, CJ successfully passed through all management processes ranging from raw materials of products to production processes, test reports for raw / subsidiary materials, warehousing / management and transportation not just for a simple certification process. For instance, Kimchi successfully passed through all inspections and standard managements from raw materials to production of Kimchi Aekjeot (fish sauce) to give flavor.

“Many countries such as Japan, China, France and other countries produce good achievements by entering Halal food markets” and “CJ Jeiljedang will also focus on aggressive sale / marketing activities recognizing that major products, Hetbahn, Sea weed and Kimchi give good opportunity to jump up to global brands” added CJ Jeiljedang.

Next
Twosome enjoying global PR effects thanks to establishment of partnership with Celeb!