CJ GLS established a MOU with a post information company in Singapore, ‘Singpost’ 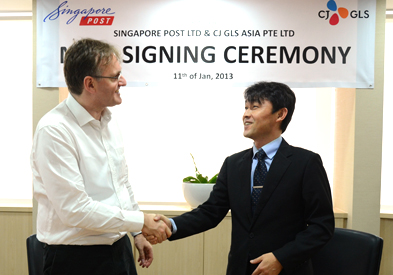 CJ GLS, which announced that it would incorporate CJ Daehantongwoon on Apr 1, started full-fledged jumping up of ‘Global Top 5 logistic company’ The Global SCM Innovator CJ GLS(www.cjgls.co.kr) announced on 14th of this month that it established a strategic MOU with a Singapore based post information company, SingPost. Therefore, both companies are expected to share know-how for logistic networks owned by each company and to develop new business model together.  CJ GLS has an opportunity to enter new businesses such as life logistics like international parcel services in through this MOU. Especially as CJ GLS would be able to utilize on-site information with 10 Asian countries of networks owned by Singapore, it’s expected to promote enlargement of businesses and enhancement of marketing in South East Asia in the future more actively. Moreover, as international parcel services between and become available for their stabilized custom clearance based on collaboration with Singpost, it is expected to reduce delivery time by 1 or 2 days compared to existing companies. CJ GLS extended its networks into Middle East and last March through partnership with the largest logistic company, Aramex and through this MOU with Singpost, CJ GLS is enlarging international parcel service market share by extending global networks.

“Singapore is a center of ocean road to link China and India, and it is a strategic spot playing a role for gate financial and logistic industries” and “We’ll implement stabilized services through partnership with Singapore post information company and further extend logistic networks to South Eastern countries” said CJ GLS.

Meanwhile, Singpost is a commercialized post company from post department in 1992 and listed at stock exchange (SGX-ST) Its branches have currently entered Asian 10 countries achieving approximately 540 billion WON as of 2011.