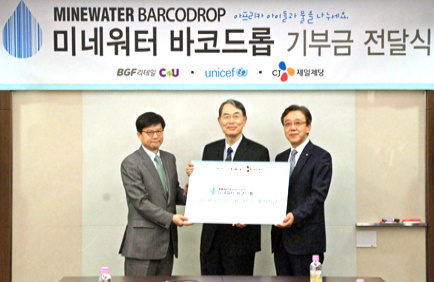 This donation is expected to be used for children in Africa who are suffering from pains due to insufficient drinking water while it is used for purifying agent to change polluted water into drinking water and to produce manual pumps. The donation fund of 132 million WON collected via ‘Minewater Barcodrop Compaign’ is the money equal to the production of 1.62 million liter of clean water in Africa. .
Currently, drinking water shortage in Africa is very severe and population that are unable to drink clean water accounts for approximately 800 million people and among them, number of children who died of dehydration is believed to account for 5,000 children per a day.

‘Minewater Barcodrop Compaign’, which has been started since March last year, collected donation fund in a way that 100 WON is donated when a consumer scans the donation barcode with water droplet pattern one more time after he or she scanned barcode for Minewater and vendors such as CJ Jeiljedang and BGF Retail (Convenient store CU) donate additional 100 WON to the consumer’s donation of 100 WON, which creates a total of 300 WON per one donation. This campaign became very popularized as it is easy to donate money by everyone while it is proved to be very distinctive awarded by famous advertisement festivals in Korea and overseas including international advertising festival. In addition, Minewater resulted in 2 times higher sales compared to same period of previous year since the donation campaign.  “This Minewater Barcodrop Compaign’ is an opportunity to realize ‘Protect country by businesses’ that is a philosophy of CJ’s business foundation” and “We will continue to do various social contributions only available by CJ Jeiljedang as much as we can do” said the vice CEO of Jung Tae Young of CJ Jeiljedang. Song Sang Hyun in Korea committee of UNICEF said “This campaign is more meaningful as it is a donation carried out by CJ Jeiljedang that is no.1 food company in Korea and leads national health and CJ Jeiljedang will send donation fund to UNICEF on regular basis by carrying out “Minewater Barcodrop Compaign” continuously.

Next
CJ GLS established a MOU with a post information company in Singapore, ‘Singpost’