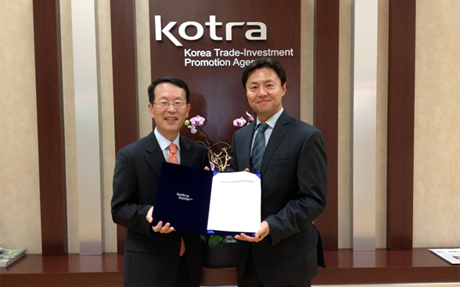 “Korean Wave is believed to become K-Wave meaning a K-Culture to represent the world” said Choi Jun Whan, CEO of CJ E&M America which is American corporation of CJ E&M, after he established MOU with ‘Korea Media & Contents Market USA(hereafter refer to ‘KMCM USA’) in connection with cooperation for K-Con 2012 (Hereafter refer to K-Con) in last 12th at council chamber of KOTRA LA to spread Korean Wave contents in USA and extend Korean Wave businesses.


CJ E&M announced that it is scheduled to hold K-Con 2012 festival on October 13 sponsored by Mnet America in Verizon Wireless Amphitheatre located in LA Irvine, USA as a convention representing Korean Wave. This event, which consists of fan meeting by Korean Wave stars, dance contest and experience of Korean traditional foods, is expected to a valuable opportunity for Korean Wave fans in USA.


Especially, 4 Minutes, G-NA, B.A.P and BWB (Winner from Koreas Got Talent) are expected to give a great deal of pleasures for Korean Wave fans as a finale of this event. CJ E&M said “Recently, as it’s not overestimated that the fever of Korean Wave is believed to reached at its culmination compared to the past, it would be the best opportunity for CJ E&M to well take advantage of business aspects such as using Mnet America that is a business channel in USA” and “This event is expected to become a bridge to connect Korean Wave to North America markets including USA”


In addition, along with K-Con presided by CJ E&M, KOTRA is scheduled to hold KMCM USA in Millennium Biltmore Hotel located in downtown of LA on October 12 just a day before K-Con is held, which attracts people’s attentions.


KMCM USA is a meaningful event sponsored by KOTRA since 2009 and it is expected to show current state for Korean Wave in USA and economic aspects of Korean Wave through panel discussion for Korean Wave Experts, 1:1 biz matching consulting and ‘The night for Korean Wave Business’ which is the eve of K-Con participated by Korean Wave stars. With this event, it’s expected that actual export of Korean Wave contents is discussed with Korean companies related to Korean Wave and global companies: 20th Century Fox, Viacom (MTV) and Stars Media Group.


A person in CJ E&M said “This event is very meaningful as it is very likely to give actual business opportunities in connection with Korean Wave contents in one place” and “We will make best efforts so that K-Con festival can play a key role for Korean Wave till last moment” For more detailed information, refer to web site at (www.kconusa.com)

Next
CJ Ceiljedang, plans to construct a green bio factory in Malaysia

Previous
‘Gangnam Style’ Psy, How would he evaluate candidates in [Super Star K]?