[Super Star K-4] Kicked Off To A Good Start with Viewing Rate of 7.6 Percent! 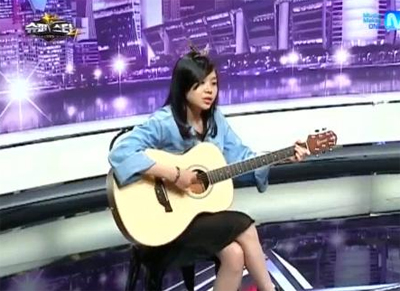 
In addition to the soaring viewing rate, internet board rooms were flooded with stories about Super Star K4. The aired program particularly drew attention with a wide array of applicants boasting unrivaled vocal power and talent for entertainment. The most favored applicants include Roy Kim with outstanding talent and appearance, Ryu Seong-woo who was complimented by jury “Lee Seung-cheol” as talent among top 10 and Yuk Jin-soo who moved jury Lee Seung-cheol so much that Mr. Lee shed tears. In addition, the majority of the applicants who appeared in the program occupied top post in terms of search words in major portals.


The phenomenon that ordinary men, not entertainers, take top post in internet search words just because they appeared in aired program is unprecedented. This is the evidence that the applicants mostly boast formidable vocal power and Super Star K is unrivaled among the aired programs in terms of stirring interest of the public. In addition to the applicants, “T Girl”, “Guide Vocal” and “Ero-Song” were among the most favored search words, demonstrating increasing interest in Super Star K4.


SNS was no exception. While Super Star K4 was aired for about half and an hour, viewers displayed positive response and anticipation toward the program, showing diverse emotions from amazement at applicants’ vocal power to sadness over applicants’ heartbreaking story and laughter. In addition, rumors over Roy Kim’s father who is known as CEO were once twitted among SNS members. Jeong In-hye, a member of girl group “Rainbow” disclosed that Roy Kim is her cousin through twitter. K Pop Star Yoon Geon, who attended the event as a special jury member, twitted, saying, ”I fully agree with Haneul. I also thought that Roy Kim is surely among top 10 talent.” K Pop Star Heo Gak also twitted, saying “What a big deal! Before I became a K-pop star, my role model was Yeon Kyu-seong. It’s real big deal. Cheer up, Yeon Gyu-seong!”


In addition to this, viewers variously applauded over the program, saying “Yuk Jin-soo and Ryu Seung-woo are all wonderful! Bravery and hope work out miracle. So far the program was aired only once, but I already am looking forward to the next one. Someone already fascinated me. While watching the program, I wept and laughed. What am I doing? Super Star K, why do you make me cry in the middle of night? Super Star K certainly has the power to move deeply. This year as well, it will become a big deal. How can I wait until next week?”


The viewing rate among online viewers has increased significantly. According to Mnet, the number of people who simultaneously accessed Mnet.com and Tving to view Super Star K increased by 2.5-fold compared with the previous season. This is seen as part of the latest trend that younger generation tends to view programs through online platform. Meanwhile, Super Star K production team said, “The applicants who appeared at the first show may be compared to appetizer. There are still a number of applicants with amazing skills. We bet you won’t be disappointed with the forthcoming shows.”


Meanwhile, among the applicants who drew attention in the first show are Park Sang-bo, who gave viewers a big laugh with eerie vocal technique, Jeong Hui-ra who introduced the world’s first ero-song, Dick Pungs, rock group with thick layer of fans in indie genre, Ahn Ye-seul who resembles Kim Yeon-ah, and Koe Nam and Ok Geu-seul which include guide vocal of Pop Star Baek ji-young.