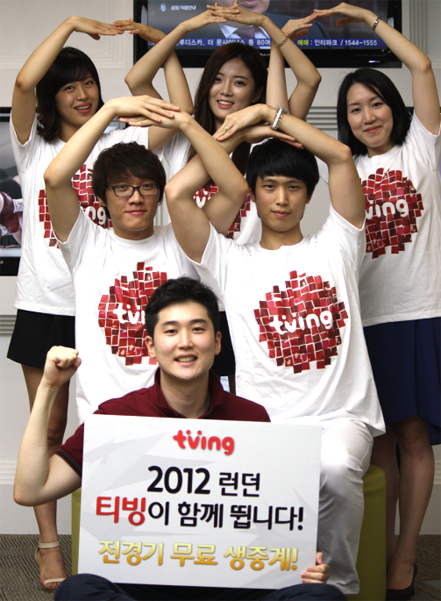 Throughout the London Olympic Games, “tving” will broadcast live every moment of the riveting games around the clock. Specifically, your mobile phone may alert you to Park Tae-hwan’s swimming match that is about to start through alarm message. In addition, your mobile phone allows you to appreciate four kinds of competitions simultaneously through a single screen. Access to tving ensures you unlimited opportunities to enjoy the fervor for the London Olympic Games “anytime and anywhere.”

“tving,” CJ Hellovision (headed by Byun Dong-shik) N Screen Service, plans to install booth specific for the broadcasting of the upcoming Olympic Games from July 21st to broadcast live every competition involving Korean players and the major events for free. Thus, the service users may enjoy unlimited access to any Olympic competitions through mobile phones while on move. In addition, the access is enabled through LTE, WiFi, 3G and any other communication environment as well as wired internet. What’s more, users may appreciate four kinds of competitions simultaneously through a single screen if you use tving’s “multi-view” via PC. “tving,” which brought the concept of “quick delivery of highlighted scenes,” also provides highlighted competition scenes in an hour after the competition ends through VOD. CJ Hellovision’s “tving” is making every effort to provide best quality services during the Olympic Games.

On top of this, tving provides a wide variety of conveniences given that time difference is big between in the and . If you use reservation feature, you may automatically receive alarm message through mobile phone in time for the competition registered. Thus, this will help you not to miss an opportunity to watch a big match. Furthermore, Tving’s service to recommend major events through VOD allows you to enjoy the Olympic Games to a full extent. If you use programs like “Big match that should never be missed,” “Momentary record-high viewing rates,” and “Glorious moment,” you may easily encounter the essence of the Olympic Games.

In addition, tving carries out various events so that the public may enjoy the Olympic Games in a more exhilarating way. If broadcast program of the competition involving Taegeuk warriors shows the viewing rates of more than 50 percent, tving provides randomly selected viewers with plenty of gift sets. tving also carries out event to provide real gold for anyone who presents the exact number of gold medals that the Korean team will acquire. Tving also provides tving cash for 1,000 people randomly selected among people who leave comments to cheer up Taegeuk warriors.

Next
You Did Great Job, Park Taehwan! Haetban Will Give A Treat!