The third race in the CJ Logistics Super Race Championship 2021 was held for two days at Inje Speedium (track length: 3.908 km) starting on September 4, 2021, under the name of the Gangwon International Motor Festa 2021. The festival was held without spectators following the government directive on social distancing measures. 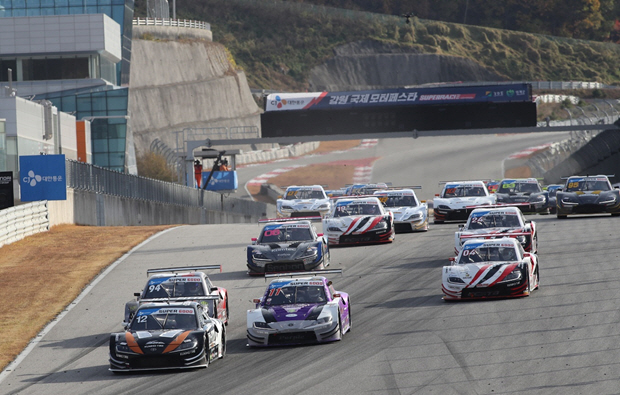 ▶ Photo from Gangwon International Motor Festa 2020, Super 6000 class machines at the start of the race in the final round.

To appease the disappointment of motorsports fans who had been looking forward to seeing the race in person, racers got ready for a race that was expected to be more spectacular than ever.

In the highest class in Korea, the Samsung Fire & Marine Insurance 6000 Class, 13 teams and 22 racers, including N’Fera Racing Team (Driver Do-yoon Hwang) from Nexen Tire, who recently joined the super race, were named on the roster. With the addition of Nexen Tire, on top of Kumho Tire and Hankook Tire, the competition in the Super Race was more intense than ever before.

In 2019, Hangwoo Jo (Atlas BX Motorsports) began his third race of the season with six points. He won in the third round, which opened the competition for the season Championship, and ended up finishing in second place. Last year, Jaehyun Kim (Vollgas Motorsports) only earned four points after finishing the second round but ended up winning in the third round creating an upward trend. He then came on third in the fourth and the sixth rounds and finally won in the final round. This made us all look forward to seeing who would end up winning in the third round, making a dramatic turnaround in the season.

The Gangwon International Motor Festa 2021 has been gaining increasing popularity amidst these changes and was broadcast live for two days on September 4 and 5, 2021 on the official Super Race Championship YouTube, Facebook, Naver TV, and Kakao TV as a result. The finals for the Samsung Fire & Marine Insurance 6000 Class and Kumho GT Class (GT1, GT2) were televised as well on Channel A, Channel A Plus, and Xtvn on September 5, 2021. The live broadcast in Chinese was aired to Chinese fans via the streaming company, Huya.