CJ Logistics’ professional golfer Si-woo Kim (26) finished runner-up at the final tournament of PGA TOUR's 2020-2021 regular season, after playing heated matches where he displayed perseverance by not giving up until the end. Amid competition fierce enough to entail a second play-off, the sports marketing activities of CJ Logistics, which has been sponsoring Si-woo Kim since 2013, also drew attention.

Recovering from falling behind by 6 strokes, Si-woo Kim exposed the CJ Logistics brand at every critical moment in the play-off, increasing global awareness of the brand maximally 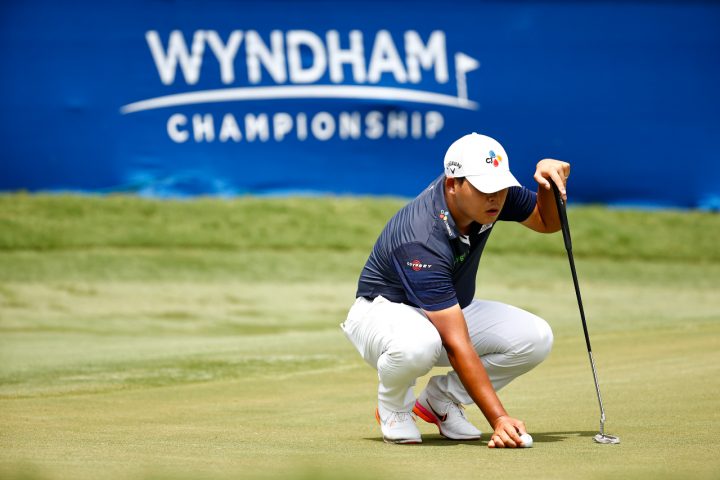 ▶ CJ Logistics’ professional golfer Si-woo Kim prepares to putt at the 18th hole in the final round of PGA TOUR's Wyndham Championship 2021.

Having started the final round in a tie for 15th on the day, Si-woo Kim kept cutting strokes from the 4th hole on with fierce focus. Following a birdie on the 4th hole, he achieved an eagle on the 5th hole and continued with his birdie-scoring march towards a come-from-behind victory in the latter half of the event as well. Si-woo Kim went into a playoff tied for the lead, cutting one stroke on the 10th, 13th, and 17th holes, respectively, without playing a single bogey.

In the first playoff, Si-woo Kim, whose tee shot had gone into the rough, faced a crisis when even his second shot missed the green. However, he subsequently holed a par putt with skillful game management, entering a second playoff. In the second playoff that followed, however, his tee shot went off the fairway, which made things difficult for him afterwards, eventually leaving him in second place.

Having yielded good results in the regular season including winning the American Express, Si-woo Kim is expected to deliver outstanding performances in playoff tournaments

Having won the Wyndham Championship in 2016, Si-woo Kim was tied for 3rd last year and finished 5th in 2019 in the same tournament, showing a particular aptitude for the event. He has also raised his FedEx Cup ranking from 39th to 30th. The PGA TOUR is set to conclude this regular season with the Wyndham Championship as its last event, and starting next week, three FedEx Cup playoff tournaments will be held, featuring only the top 125 players in FedEx Cup points.

CJ Logistics’ sports marketing also gained steam thanks to Si-woo Kim's outstanding performance. Many agree that global awareness of the CJ Logistics brand increased naturally as the CJ logo printed on Si-woo Kim's cap and T-shirt and the CJ Logistics brand (CJ Logistics’ global brand) were continuously exposed to the media. In addition, the final round of the tournament featured a group consisting only of Korean golfers, namely CJ Logistics golfers Si-woo Kim, Sung-hoon Kang, and Seong-jae Im, and because that was a first in the history of PGA TOUR, further attention was drawn from golf fans around the world. As the three golfers playing side by side were broadcast live to every corner of the world, the status of CJ Logistics, South Korea's leading logistics company, was thought to have increased along with it.

Immediately after winning second place, Si-woo Kim said, “I was confident about the event, but it's a pity that I finished the runner-up. However, I feel relieved to have finished the regular season in a pleasant way. I was able to play the tournament without giving up until the end thanks to CJ Logistics’ unwavering interest and support.”

Making ceaseless forays into global markets, CJ Logistics is actively advancing across the globe. The company has opted to use the “CJ Logistics” brand for its consolidated U.S. subsidiary as well and is striving to grow into a leading logistics company in the United States, where the logistics market is front and center.