Whether it's watching in person or watching from home, it’s joyful all the same! A night race featuring a variety of fun

A night race should be fun. 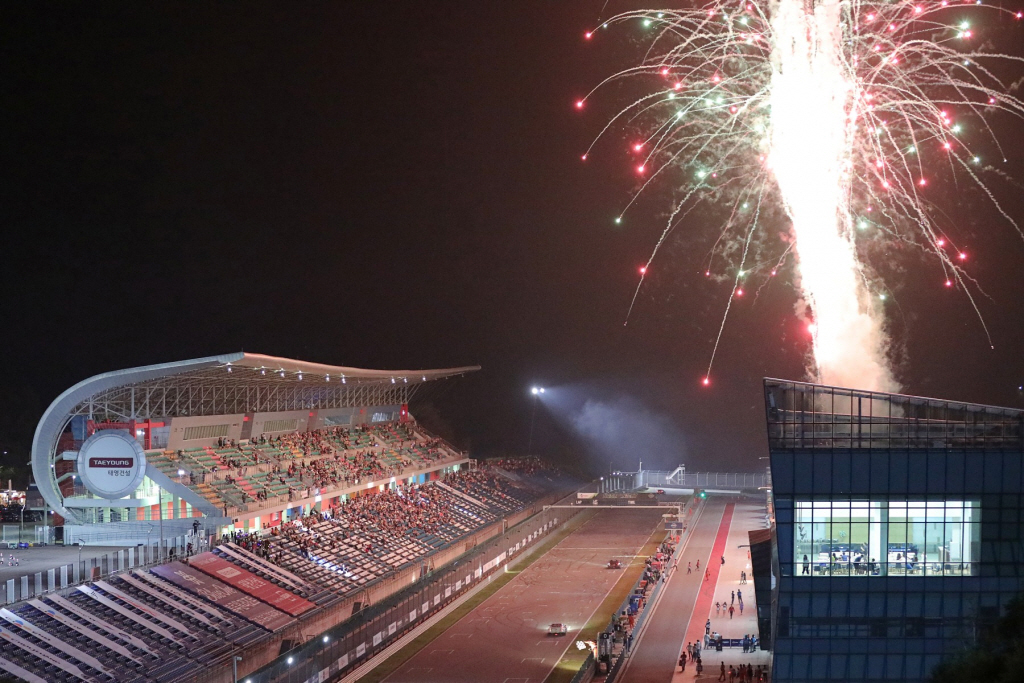 ▶ Fireworks to mark the end of the Super 6000 class final during a night race held at Inje Speedium in 2019.

That’s the mindset with the SuperRace Championship organizing committee held its first-ever night race. The organization's arduous efforts and contemplation to deliver even more pleasure to motorsport fans can be well observed in the history of its night race. Although it has become difficult to watch races in person due to the COVID-19 pandemic, SuperRace’s commitment to bringing the joy of watching these races to fans through night race remains the same.

Only limited seats are opened, so many fans have to watch SuperRace’s night race live from home. Even if it has become possible to watch SuperRace's night race in person at a stadium, it is still too early to be thrilled and excited; we need to be careful. Even though it may be imperfect in many ways, the event has been prepared for the fans to share the joy. The event reflects SuperRace's hope of providing an equal opportunity to both fans who will watch it in person and who will quell their disappointment by watching it from home.

Various events, such as taxi time for spectators, will be held at the stadium that will host the night race.

On July 10 at Inje Speedium, where Round 2 of the CJ Logistics SuperRace Championship 2021 — a night race — takes place, a taxi time event where racing cars run on the circuit with fans will be held. In addition to fans who have been selected via social media events to enjoy the lucky opportunity, the championship's main sponsor CJ Logistics will hold a draw at the site on the day of the race that will determine the lucky fans who will get to participate in the taxi time event. As the draw will be held at the actual stadium, the joy of winning is guaranteed to be even greater. In between the laps, a succession of various events will also be held for the race's spectators through the electronic scoreboard in the stadium. Also, small gifts await for those who actively participate in the events. Of course, those invited to the stadium will certainly be able to fully and vividly experience the joy of a night race, which is sure to stimulate the senses. Not only those of sight, but also the sense of sound and smell as the cars race around the track.

For those watching the night race live from home, there will also be live events broadcast directly from the site of the race and events that can be participated in by leaving comments.

Even those who have missed the opportunity to watch the race in stadium because they were unable to get tickets, can still experience the joy of watching the race with live broadcasts sent through the SuperRace Championship's various channels. An event where fans choose the best moment of the night race is currently underway on the Super Race Championship’s official YouTube channel. The winner of this event will be picked through a live broadcast on the day of the race. Fans are expected to have fun participating in the event and watching the winner get picked. During the live broadcast of the race, quizzes and comment-based cheering events will be held from time to time exclusively for live broadcast viewers. There is also the thrill of watching the race that only live broadcast viewers can enjoy, such as the various videos made using racing drones and in-vehicle cameras, and increased liveliness of the race made possible by telemetry information.

Next
K-Genre Hit Show 'Voice' Demonstrates the Power of Franchise IP. The Japanese remake of 'Voice' launch season 2 soon amid its massive popularity in Japan.