Mnet's “I Can See Your Voice” Gets Greenlit to Debut on U.S. Terrestrial TV Channel Fox

Mnet's “I Can See Your Voice” can soon be enjoyed in American homes, starting next month.

U.S. Version of “I Can See Your Voice” to Make Its Debut on Fox 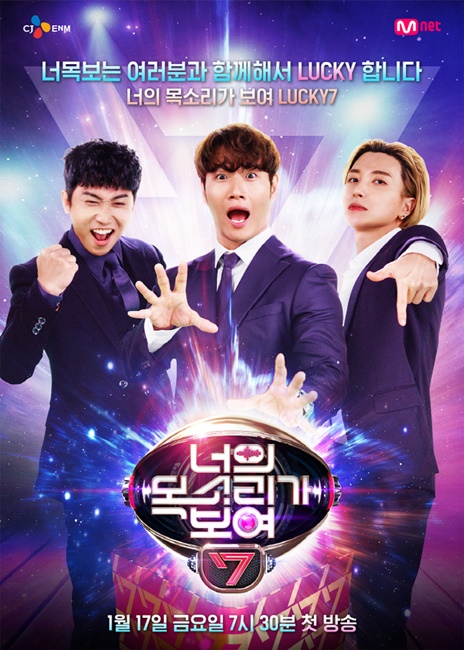 ▲ Poster for Season 7 of Mnet's “I Can See Your Voice”

CJ ENM announced on the 28th that Mnet's mystery music game show known to feature huge twists, “I Can See Your Voice (hereinafter, “ICSYV”), would be broadcast for the first time on U.S. terrestrial TV channel, Fox. With its first episode scheduled to air on October 23, “ICSYV” will amuse American viewers at 9 p.m. EST — an hour of prime time — every Wednesday.

The original creator of ”ICSYV,” Mnet CP (?) Lee Sun-young, has been actively involved with the U.S. version of the show in all stages of its production as executive producer, from planning to pilot production to main episode production, adding more meaning to the show’s introduction in America. Korean-American actor Ken Jeong will join the show as both MC and producer, and James McKinlay and Craig Plestis will also serve on the show as producers.

In addition, Emmy-nominated actress Cheryl Hines and the Emmy-winning TV host Adrienne Bailon-Houghton will also star in the show as panel judges.

Mnet CP Lee Sun-young said of the achievement, “When I initially produced “ICSYV” and started selling it to various countries overseas, I thought it would be great to see it aired in the U.S. Now that the show is slated to soon air on U.S. TV channel Fox following the closure of a broadcasting deal with the U.K.'s BBC, I couldn’t be happier. Participating in the Fox production of “ICSYV” was a very valuable experience. Not only the American production crew, but also host Ken Jeong expressed a lot of affection for the show, and they finished the filming on a joyful note, commenting that the process of separating the ones with talent from the tone-deaf ones was very exciting. I am pleased that everyone has told me that the show is destined for success, and that they are very looking forward to its debut broadcast.”

CJN ENM 's Content Business Division head Seo Jang-ho said, "I am extremely happy that “ICSYK” 'has finally had its debut broadcast date for the U.S.'s FOX channel confirmed. This month, we have successfully debuted the German version of “ICSYK” as well. I am confident that through “ICSYK,” we will be able to promote the excellence of the Korean TV show format to the whole world, including Europe and the U.S.”

Rob Wade, president of Fox's entertainment division, said, “In my view, the show has already a success considering by just the fact that its filming has been safely completed during the summer. That said, I was captivated when I watched the finished show and I could feel a sense of relief even before I heard one syllable on the show. I wanted to show it to U.S. viewers as soon as possible because there was no reason to delay its airing any longer. In difficult times like these, I hope “ICSYK” will provide viewers with a nice distraction, however how small it would be. I'm confident that “ICSYK” will prove to be a fantastic family entertainment show.”

Having Been Aired in 12 Countries and Sealed a Broadcasting Deal with BBC One, ICSYV Boasts Outstanding Overseas Performances

“ICSYK” is a mystery music game show known for its huge twists, where panel judges distinguish whether show participants, divided into mystery singer groups with their actual singing skills hidden, are skilled singers or tone-deaf hacks based on just a couple of clues including their faces. Since making its debut on Mnet in 2015, the show, now in its seventh season, has gained considerable popularity in South Korea.

The show is yielding remarkable results overseas as well. “ICSYK” has either debuted or is currently airing in eight countries around the world, namely Malaysia, Bulgaria, Indonesia, China, Cambodia, Thailand, the Philippines, and Germany. In addition to them, the show has also managed to get air time in four other counties, the U.S., Romania, the U.K. and the Netherlands and is therefore set to captivate viewers in a total of 12 countries.

In particular, the German version of “ICSYK,” which made its debut on Germany's RTL channel on the 18th of this month, attracted 2 million viewers and was recorded as the most-watched show among viewers aged 14-49 on RTL that day. In Thailand, since making its debut in 2016, the show has been consistently popular, with the total number of its episodes aired so far amounting to over 200.

Also, in the U.K., among all Korean TV shows made in the Korean entertainment show format, “ICSYK” became the first to get air time on BBC One, with its debut airing scheduled for early next year. In 2016, the show was nominated in the No-Scripted Entertainment category at the 44th edition of the International Emmy Awards, a prestigious awards ceremony for TV shows.