CJ Group Decides to Hold This Year's THE CJ CUP in the U.S.

THE CJ CUP will be moving its venue from the usual location of Jeju to Shadow Creek Golf Course located in Las Vegas, Nevada, U.S. due to concerns over COVID-19 infections.

CJ Group to Hold THE CJ CUP in the U.S.; the Best Alternative Considering the Current COVID-19 Situation and the Group's Plans to Penetrate Global Markets 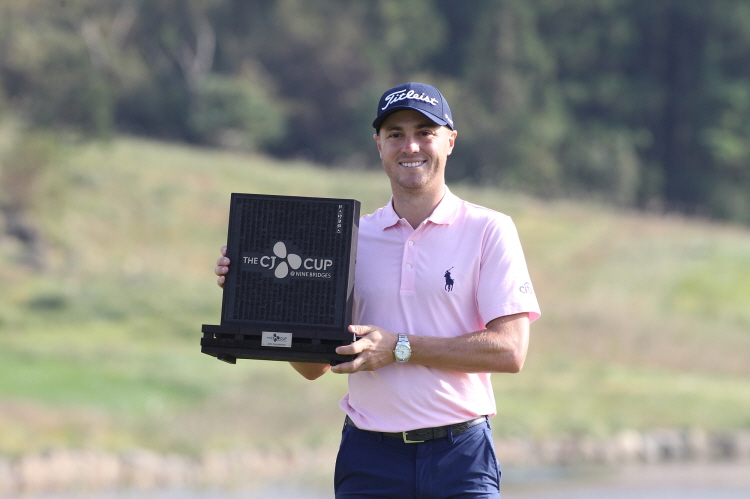 Since more than 90% of the golfers playing in THE CJ CUP are active on the PGA TOUR and on other overseas golf tours, CJ Group has placed top priority on the participating golfers’ schedules and safety, and the decision to move also reflects the group's ambition to penetrate global markets. With the South Korean government's two-week self-isolation policy for people entering South Korea from overseas still being upheld and with PGA TOUR games having to take place every week during the tournament, it is practically impossible for most of the foreign golfers to visit South Korea. And even if South Korea’s domestic situation improves, it will still be risky to promote a large-scale sporting event in South Korea without any proven vaccines or treatments in hand. Besides, CJ Group assesses that holding THE CJ CUP in the U.S will prove to be beneficial for the group's ongoing globalization efforts. However, CJ Group's moving THE CJ CUP’s venue country to the U.S. is only a temporary arrangement made due to the COVID-19 situation, and the group plans to hold THE CJ CUP in South Korea again next year.

A CJ Group official said, "Our decision to hold THE CJ CUP in the U.S. was the best decision we could make with consideration for the participating golfers, golf fans and our global strategy, under the current circumstances where holding the tournament in South Korea as we've always done is impossible due to the COVID-19 situation. Those of us at CJ Group will do our best to ensure that THE CJ CUP can be safely held by fulfilling our responsibilities and duties for all interested parties involved in the tournament.” He also added, “Considering our group's globalization efforts, which are represented by our 2018 acquisition of Schwan's, the largest food producer in the U.S., and our strategic brand “bibigo’s entry into overseas markets, we want to turn the current COVID-19 crisis into an opportunity for growth through this decision.”

CJ Group’s decision to move THE CJ CUP's venue country to another country also shows that in this COVID-19-induced crisis of international relations, the group is determined to let sports fans around the world know its vision as a global lifestyle and culture company which has been leading the way in spreading South Korea’s various cultures through THE CJ CUP. Vice president of the PGA TOUR’s international development division Ty Botaw said, “The PGA TOUR would like to sincerely thank CJ Group for its partnership and decision to move the venue. I’m confident that the new installment of the festival, scheduled to be held in the U.S., will capture the eyes and ears of not only Korean fans but also golf fans around the world and that the move will serve as an opportunity to raise global awareness of CJ Group and THE CJ CUP.”

THE CJ CUP'S inaugural champion and defending champion Justin Thomas, who is also the current No. 1 in the world rankings, expressed his excitement for the forthcoming U.S. installment of THE CJ CUP, saying, "It’s unfortunate that I won’t be able to visit South Korea this year. However, I'm very excited that I can still play in THE CJ CUP, albeit at the new venue Shadow Creek.” He also gave his opinion of THE CJ CUP, saying, “Probably because I've won it twice, THE CJ CUP has special significance to me. Because of the hospitality of Korean fans and the unbridled support of CJ Group, I and many of my fellow golfers really like THE CJ CUP.” 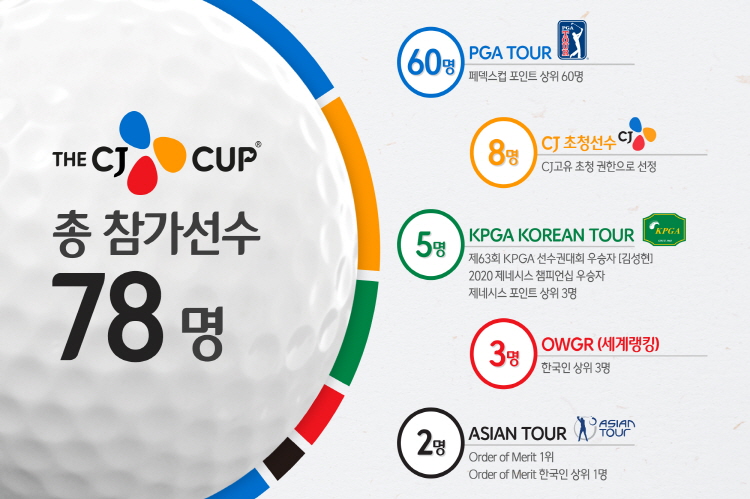 ▲ Eligibility for participation in THE CJ CUP

With THE CJ CUP having been decided to be held in the U.S., several changes have been made; CJ Group will provide airline tickets and local accommodation to the KPGA Korean Tour golfers who have been qualified to THE CJ CUP, and the group will also come up with infection prevention measures with the participating golfers’ travel and accommodation foremost in mind after discussion with the PGA TOUR. In addition, with regard to eligibility for the tournament, the slot for one invited amateur golfer that has been provided for the last three years will not be available this year. The reason is that because the KGA-hosted tournaments have been unable to take place normally due to the COVID-19 outbreak, it has become difficult to fairly pick one amateur golfer for THE CJ CUP.

Since last June, the PGA TOUR has been holding tournaments pursuant to the infection prevention guidelines set out by each U.S. local government in conjunction with the Centers for Disease Control and Prevention. Keeping with this, CJ Group has been in constant discussions with associated organizations and the PGA TOUR to ensure the stable tour operation of the CJ CUP and the safety of the participating golfers and tournament officials, and after much contemplation, the group has made the decision to move the venue country of THE CJ CUP. As a result, following the PGA TOUR’s Shriners Hospitals for Children Open, which is scheduled to take place in the second week of October, THE CJ CUP is also slated to be held in the Las Vegas area, which will see golf tournaments take place two weeks in a row.

Meanwhile, on Sunday the 9th, pro golfer Kim Seong-hyun, the winner of the 63rd KPGA Championship, was confirmed as the first golfer to be qualified to THE CJ CUP.

Next
CJ CheilJedang Named “Best” for 5 Consecutive Years in the Evaluation of the Win-Win Growth Index, Achieving a First-of-its-Kind Feat in the South Korean Food Industry