KCON:TACT 2020 SUMMER, an Online K-Culture Festival with 4.05 Million People from 150 Regions of the World in Attendance

CJ ENM has set a new standard for the globalization of the K-lifestyle in the era of untact.

An audience more than 3.5 times larger than the total number of visitors over KCON’s 8-year 24 offline installments has been gathered in a single space 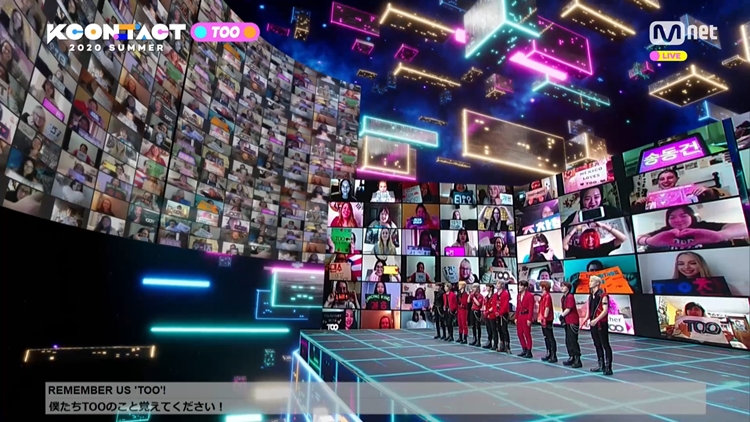 ▲ TOO communicate with fans through an untact multiple video call system

On the 29th, entertainment and lifestyle company CJ ENM announced that “KCON:TACT 2020 SUMMER,” an online K-culture festival it had held for a week from the 20th to 26th on various platforms, such as YouTube, TVING, Shopee, and AIS, had attracted a total of 4.05 million visitors–including free and paying visitors—from 150 regions of the world who participated for a week. The number is more than 3.5 times larger than the number of all visitors who have visited KCON over its 8-year 24 offline installments.

CJ ENM has held the K-culture festival KCON in the U.S., Central and South America, Europe, the Middle East and Oceania since its inception in 2012 in a bid to spread the K-lifestyle globally, attracting a cumulative audience of 1.1 million. This year, KCON has killed two birds with one stone by discovering new business models through paid content streamed in the form of online festivals held on digital platforms and by expanding the base of K-culture with free, high-quality content that was unveiled for the first time during the event. 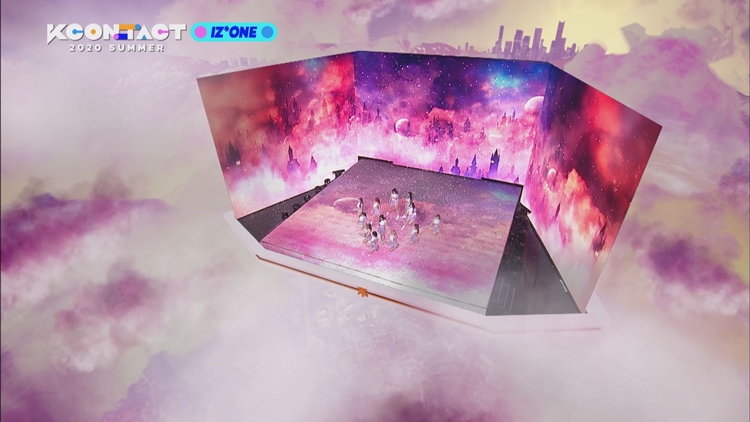 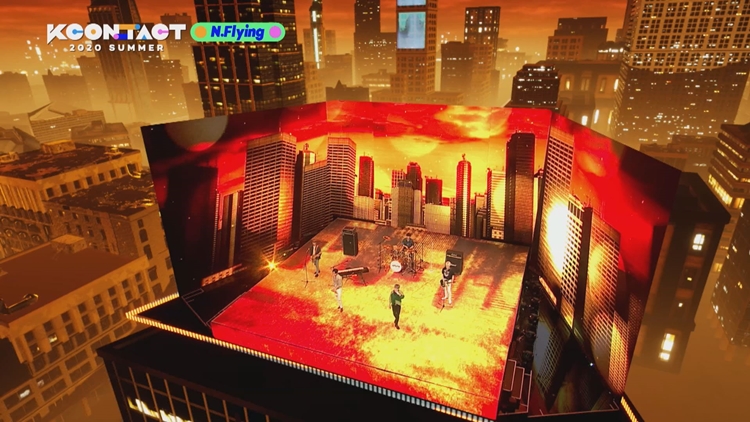 ▲ MR technology makes N.Flying look as if they are performing in the middle of a city 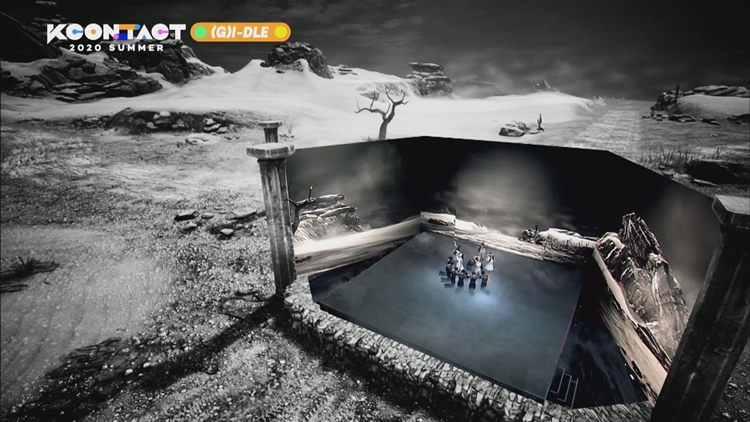 KCON:TACT 2020 SUMMER festival took place over seven days, showcasing an abundance of performances that featured 33 groups of artists: namely, AB6IX, A.C.E, ASTRO, ATEEZ, BVNDIT, CHUNG HA, CRAVITY, EVERGLOW, GFRIEND, (G)I-DLE, Golden Child, ITZY, IZ*ONE , JO1, Kang Daniel, Kim Jaehwan, LOONA, MAMAMOO, MONSTA X, N.Flying, Natty, NATURE, OHMYGIRL, ONEUS, ONF, PENTAGON, SF9, Stray Kids, THE BOYZ, TOO, TOMORROW X TOGETHER, VERIVERY and VICTON (listed in alphabetical order). The performances were streamed live each night for four hours starting at 10 pm Korean time for the duration of the festival across eight different virtual stages created using MR (mixed reality) technology with themes including deserts and the universe, thereby providing new experiences to both the fans and the artists. In addition, by presenting collaborative online performances by blending artists in different places onto a single screen, they presented a new model for collaboration between artists in this new era of untact. JO1, an 11-member boy group born through South Korea’s music idol creation system, participated in KCON:TACT 2020 SUMMER in their home country of Japan and communicated with their fans from around the world. 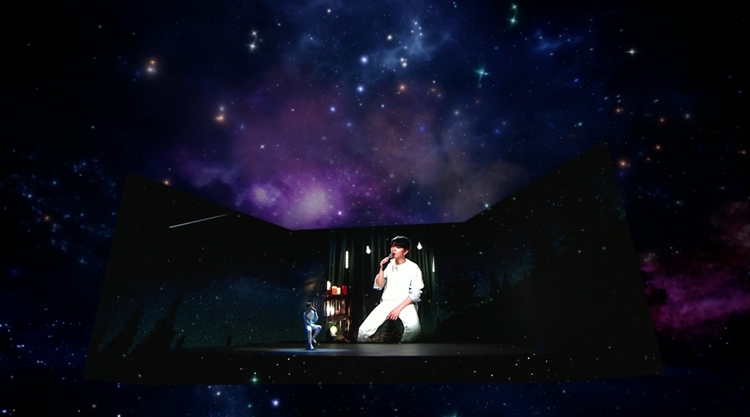 ▲ A collaborative performance by CRAVITY's Min-hee and MONSTA X's Ki-hyun, who, despite being in different places, look as if they are performing in the same space

CJ ENM, which is the first to have showcased AR technology in South Korea for performances at the MAMA (Mnet Asian Music Awards) in 2016, has led the trend once again by adopting XR (eXpanded Reality) technology, which combines both AR and VR, into concerts and fan meetings at KCON:TACT 2020 SUMMER. Various technologies specialized for digital platforms made colorful performances that were previously thought to be possible only in the imagination a reality and enabled real-time interactive communication between artists and fans.

In particular, the opening performance given by LOONA member Heejin using square cube AR imagery really showed the essence of the technology. At the online fan meetings, held every day during the festival hosted by Eric Nam, technologies that had not been previously attempted for online fan meetings—such as AR towers, which reflect fans' participation in chats in real time, and AR drawings, which you create in the air by moving your mobile device as you wish—impressed the artists and fans by making them feel like as if they were in the same place together despite the constraints of space.

KCON:TACT attracts overseas fans with various types of K-culture other than K-pop, including K-beauty and K-food

In addition to performances from K-pop artists, KCON:TACT also presented a variety of other content related to the K-lifestyle including K-beauty and K-food, catching the attention of overseas fans. Each day during the festival, via KCON STUDIO, a studio built jointly by DIA TV YouTube creators and KCON, new content created through the collaboration between artists and YouTube creators was showcased for the first time. KCON promoted the charms of various content pieces, including “Learn K-Pop Idol Dance Moves with Grandma Park Mak-rye and TOO,” “Pouch Explorations with EVERGLOW and beauty creator Thin,” “Styling Tips Learned by PENTAGON from hair designer Giwoo.” Moreover, KCON also created content about mukbang, which has already established itself as a proper noun outside of South Korea as well, where BTOB’s Eunkwang, broadcaster Alberto and the boy group SF9 introduced Korea’s traditional food ingredients and ate together foods made using recipes that go well with those ingredients, attracting a lot of interest in K-food from their fans around the world.

Shin Hyung-kwan, CJ ENM's Music Contents Director said, “After establishing KCON as the world's largest K-culture festival with a cumulative audience of 1.1 million with a sense of a mission for globalizing K-culture eight years after its inception in 2012 in the U.S., we have spread Korean culture to 4.05 million people around the world for seven days through KCON:TACT 2020. Going forward, CJ ENM will continue to hold festivals both on and offline and develop various content pieces that suit the characteristics of each event, leading the globalization and expansion of K-culture.”

Even after the week-long festival wraps up, the fervor of KCON:TACT 2020 SUMMER will not stop for a while. For two weeks after the completion of the event, videos of the performances and online fan meeting videos will be streamed non-stop 24 hours a day, and videos filmed individual artists and behind-the-scenes videos will be released sequentially. You can enjoy KCON:TACT 2020 SUMMER by signing up for a monthly subscription at YouTube and TVING.