CJ CheilJedang’s Micho, a leader in K-beauty beverages, is showing explosive sales growth in Japan. Based on that growth, CJ CheilJedang is taking the lead in expanding the Japanese market as well as in spurring a paradigm shift, creating a fruit fermented vinegar craze in Japan, the origin country of vinegar.

Sales of Micho in Japan grew 17-fold from about KRW 5 billion in 2015 to about KRW 86 billion last year. 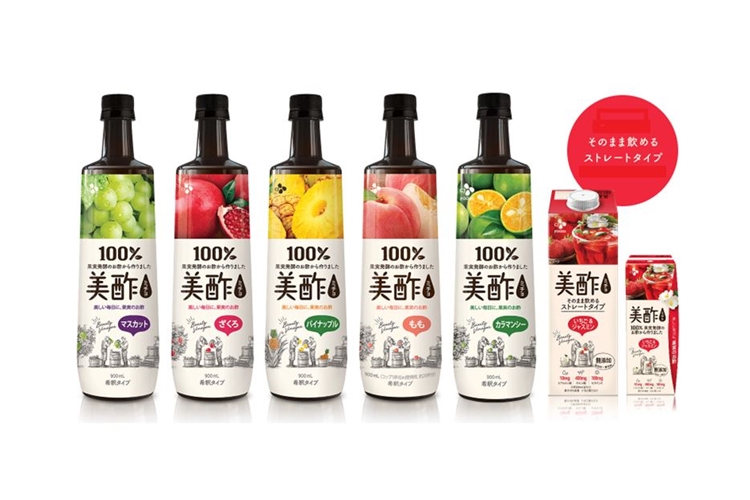 ▲ Micho is gaining popularity in Japan

CJ CheilJedang's Micho recorded sales of approximately KRW 86 billion in Japan last year, based on local consumer prices. This is an increase by more than 17 times in just 4 years, compared to sales of KRW 5 billion in 2015. Sales of Micho are continuing to grow rapidly this year, with the figure for January-May having almost doubled compared to the previous year.

Micho is also driving market growth. Because most drinking vinegar products had been focusing only on health, they had been thought to be reserved only for middle-aged and elderly people, and as a result, the market for drinking vinegar products remained stagnant for many years while being ignored by young consumers. However, Micho has expanded the market for the last four years at an average yearly growth rate of 8%, gaining huge popularity among female consumers in their 20s and 30s as a K-beauty drink that is not only healthy but also delicious and good for the skin.

Micho is also leading a paradigm shift in the market. In the Japanese drinking vinegar product market, where black vinegar, made by fermenting brown rice, has been overwhelmingly dominant, fruit fermented vinegar is gaining traction as the next big thing due to the popularity of Micho. Even market leader Mizkan unveiled five fruit fermented vinegar products in February, which was very unexpected, and that shows that local Japanese companies are also paying close attention to the competitive power of Micho.

Micho is driving the growth of the Japanese market as it gains increasing popularity as a K-beauty drink.

Micho's aforementioned achievements are mainly attributable to the strategic expansion of its distribution channels. CJ CheilJedang first got Micho into Costco, where it is easy to hold tasting events, with an aim to promote the benefits of Micho to Japanese consumers unfamiliar with fruit fermented vinegar. As the awareness of fruit fermented vinegar among Japanese consumers increased, CJ CheilJedang expanded its distribution channels to include drug stores and imported food specialty stores, which are frequently visited by women in their 20s and 30s, Micho's main target demographic.

Micho made inroads into cafes as well, on the strength that it can be used to make various drinks through mixing with water, milk, carbonated water, etc. In fact, the cafe Skew, located in Ginza, Tokyo, has incorporated Micho into its official menu after testing selling the product and has currently proven successfully selling Micho. Recently, CJ CheilJedang got Micho into traditional distribution channels as well, including supermarkets and retail stores, as part of efforts to continuously expand its sales channels.

The company's strategy to diversify the product lineup for Micho also helped with the product’s market performance. CJ CheilJedang entered the Japanese market with only one Micho product, the pomegranate, but the company has since expanded the lineup to seven products, including the Kalamansi, Pineapple, Green Grape, Peach, Strawberry Jasmine and Green Apple, to reflect Japanese consumers’ preferences and to suit their taste buds. In April of last year, CJ CheilJedang also launched the Micho Strawberry Jasmine Ready-to-Drink (RTD), which can be consumed without diluting it with water.

As summer, the peak season for drinking vinegar, is approaching, CJ CheilJedang plans to focus on increasing sales through full-scale marketing activities. First, CJ CheilJedang plans to release a TV commercial starring popular Japanese model and actress Airi Matsui. Through that, the company will focus on informing Japanese consumers of Micho's unique characteristics and benefits, that it is fruit fermented vinegar made by naturally fermenting only fruit juice, and that it is healthy, yet also tasty.

Aside from this, CJ CheilJedang also plans to launch various new Micho products in the year to expand the range of choices for consumers while continuously holding promotional events such as tasting events through various distribution channels. Furthermore, CJ CheilJedang seeks to cement Micho as a mainstay of the drinking vinegar market through aggressive marketing activities such as developing and introducing menu items that use Micho in cooperation with Gongcha, which has about 60 stores in Japan.

CJ CheilJedang's Japanese subsidiary head Im Gyeong-il said, “Micho is leading the revitalization of the entire drinking vinegar market while being recognized as the next big thing by Japanese consumers in terms of both sensibility and culture. CJ CheilJedang will not grow complacent about our achievements so far with Micho and will further strive to grow it into the world’s leading fruit fermented vinegar brand.”