- Improvements made to residential environments by replacing heaters, wallpapers and sinks in cooperation with Gwangju Bukbu Caregiving and Happiness Sharing Center

- Plans in place to “continue sharing for coexistence” with people living in poor housing conditions, such as elders living in old rented houses 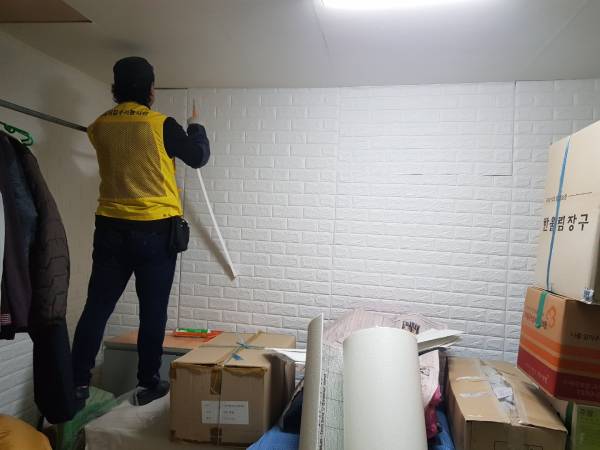 ‘A’ living in Gwangju, Gyeonggi-do has stayed at home for a long time to take care of her husband suffering from thyroid cancer. She lives in an old, rented multiplex house that needs to be repaired for her husband’s health, but their income and basic pension are just barely enough to scrape a living. However, recently they found a silver lining when CJ Logistics and Gyeonggi Gwangju Bukbu Caregiving and Happiness Sharing Center (hereinafter Happiness Sharing Center) helped them block the draughts by installing heal insulating materials and a heater to help keep the house warm. “We couldn’t brave the cold winter, but with the help of CJ Logistics and Happiness Sharing Center, now our home is warm and in a much better condition,” said ‘A’ with gratitude.

CJ Logistics announced on the 28th of January that it has completed the ‘2019 Gyeonggi Gwangju Residence and Energy Welfare Project’ that the company has been carrying out since the end of last year for 17 households in Gwangju, Gyeonggi-do. This project, which began in October 2019, was funded by CJ Logistics (KRW 1 million per household), and practical affairs, such as repairs, were done by Happiness Sharing Center, the welfare agency consigned by Gwangju, Gyeonggi.

The 17 households selected for the project were those living in a poor residential environment who lack the ability to improve their homes for winter. This included those such as recipients of the basic livelihood security, persons with disabilities, or persons with chronic and severe illnesses. In particular, the main target was those living in poor living conditions, such as old rented houses that are vulnerable to the cold in winter due to a lack of insulation facilities.

The project was carried out by reinforcing insulation materials to prepare for the cold by installing LED lights and replacing various facilities, such as wallpapers, floors and sinks. In addition to ‘A,’ the householders of the other 16 households also expressed their gratitude for the positive change brought to their lives by the improvements made on the residential environment. On the other hand, it took a long time to convince some elders living in the old, rented houses such as multiplex housing until they finally agreed to the improvement, since they had no place to go while the repair work was being done.

“I used to hate coming home because of the strong wind that struck through the cracks of the doors and windows in the winter,” said ‘B,’ a resident of an old multiplex housing block. “But now, I’m excited about this new home, and I feel happy just being inside the room.” An official at CJ Logistics said, “We’re happy to be able to provide a nice residential environment for the underprivileged people in the community so that they may spend their winter in warmth. We’re planning to continue sharing in various ways to fulfill CJ Group’s core business philosophy of coexistence.”

CJ Logistics has been consistently carrying out CSR activities, with the cumulative employee volunteer hours adding up to 25,000 hours in the past year, and having exceed 20,000 hours for three consecutive years. The company has carried out volunteer activities so that there are no blind spots in welfare, such as by sharing kimchi all over Korea where its establishments and offices are located, and creating a forest to contribute to carbon reduction by planting 1,000 trees along the banks of the Han River. Moreover, the company has carried out traffic safety campaigns to prevent traffic accidents in school zones with the community, in areas such as Gyeonggi Gwangju Police Station, Green Mothers' Society, and Chowol, Docheok, Dopyeong, and Seondong Elementary School PTA in Gwangju, Gyeonggi-do.