Yoon Je-Kyun, director of 'Ode to My Father', talks about why everyone said, “We are screwed,” on the first day of shooting 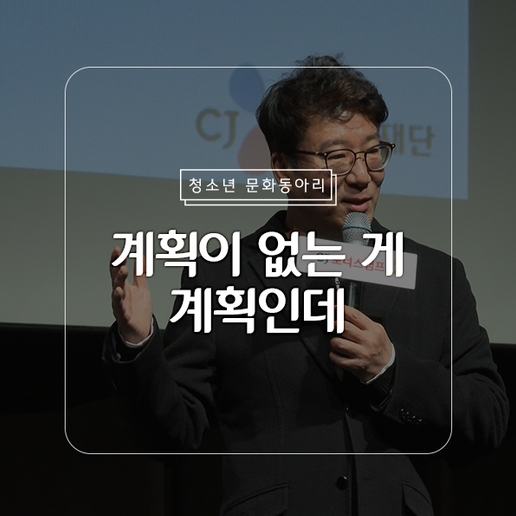 Did you know that when he quit his job, and began to shoot the first scene of

I think there are two conditions to success if any

Wherever Mr. Yoon Je-Kyun goes these days, he is often faced with the question “what are the conditions of success?” Again, at the Youth Culture Club, this question popped up once more. This time, the director revealed his two main secrets in response. First, you should remember that in life there are always ups and downs, Second, if someone expects 100, you should show them 200. He told us about how these secrets have helped to make him what he is today. 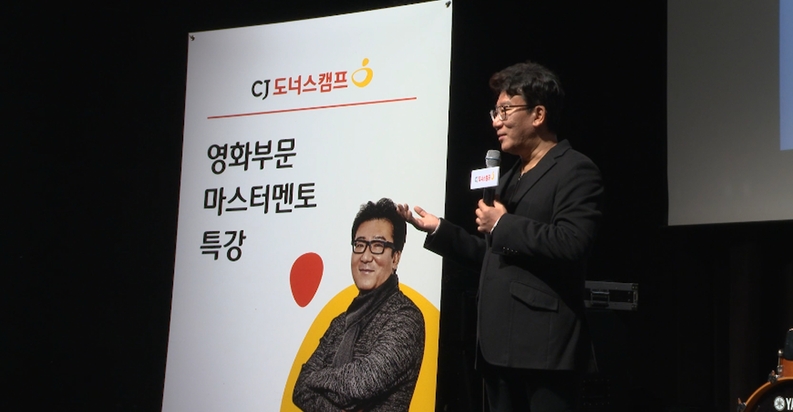 Mr. Yoon Je-Kyun graduated from the Department of Economics and soon after found his first job in the administration team for an ad company. In this position though, he didn’t have many opportunities to write anything or come up with ideas. At that time though, each team did have a chance to deliver its news through the company newsletter, which made him want to write something interesting. As such, he wrote the news like a 2-scene scenario, which as it turns out was what got him to start his career in film.

Having faced the so-called IMF crisis immediately after marriage, Yoon Je-Kyun was given a month of unpaid leave. Thinking hard on the problem of how to make money, he saw an article about a scenario competition in a movie magazine. He had been continuously writing scenarios in the company newsletter, so he decided to make use of his experience of ‘going on a group honeymoon’ to write the scenario. Back then, Mr. Yoon Je-Kyun knew only one thing about movies, i.e. 120 scenes make a movie, but even still, he was able to win the grand prize.

He then later moved to an IT company and worked there as a salesperson. People often proposed the idea to him though that he should write a ‘new scenario.’ One time while enjoying a few drinks with a new movie producer, he said under the influence of alcohol, “I have a scenario I want to write. I will finish it in a month.” That scenario turned out to be none other than 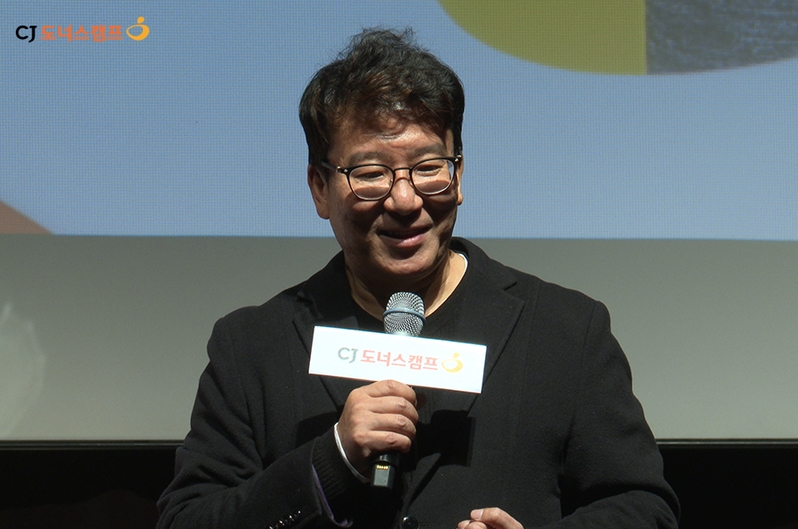 I didn’t want to do things by halves.

I wanted to surprise people,

That’s what I had in mind when I was writing the scenario.

The scenario was eventually finished, but as it was a new movie production company that was involved, there were no directors or actors that had been recruited. Mr. Yoon Je-Kyun then prepared a project plan and proceeded to try and persuade the production company again and again, and eventually, he ended up directing the movie. That year it was screening alongside < Harry Potter and the Sorcerer's Stone > and

Having received the most love from moviegoers, Mr. Yoon Je-Kyun quickly became well-known in the movie world. Coincidentally, in the following year,

His third movie was 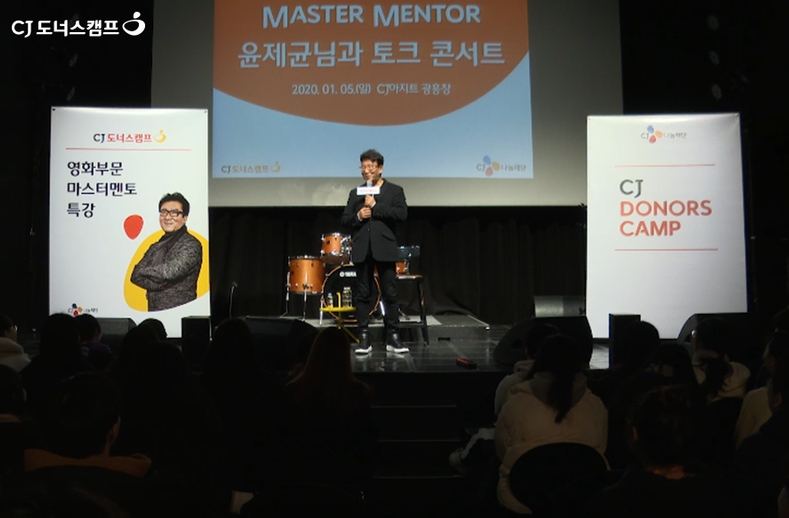 However, his following movies,

Mr. Yoon Je-Kyun told the youths in attendance that as nobody knows what will happen to them in 10 years, there is no need to become thoughtlessly frustrated with the current situation. If they show talent beyond others’ expectations, he told them, a ‘nobleman’ who will lead them will eventually show up

Are you having a tough time? In life there are always ups and downs!

Just do your best where you are, and

all you need is to surprise people.

Next, they watched a video he made for the youths which shows the process of making a movie. It was an opportunity for all in attendance to see what goes on at the site, what happens after shooting and compare finished versions. Through this, they were able to see and learn how exactly a large-scale commercial movie is created.

The director is not the ‘master’ Yoon Je-Kyun Q&A 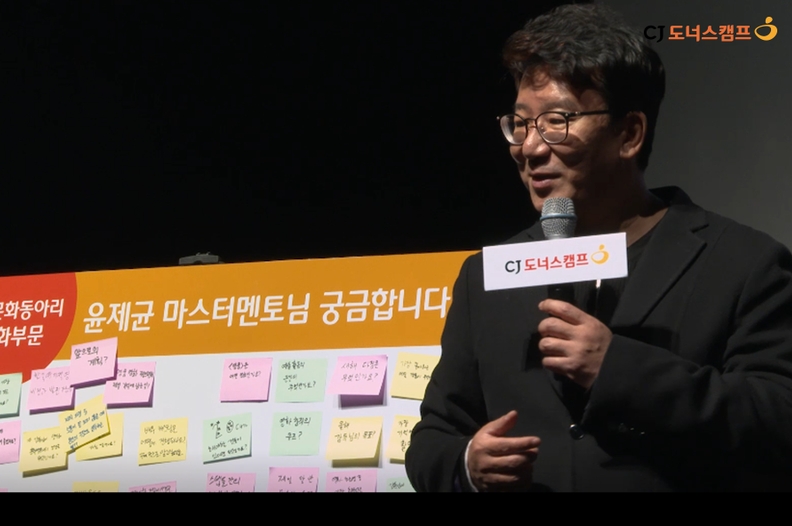 Q. What was the hardest moment in shooting a movie if any?

A. I am currently shooting a musical film called

Q. What is your secret to casting a great movie star if any?

A. There are two main methods to cast actors, using personal connections or through ability. If the scenario is good, casting becomes easy. Casting actors through ability is difficult, but it is the easiest way! What if the scenario isn’t any good though? Well, then we will have a casting war beyond imagination.

Q. What is your favorite movie?

Q. Film making is cooperative work. How do you deal with things you don't want to do?

A. It happens a lot on site actually. When I disagree with any of the staff, let’s say the director of photography wants a full shot, but I prefer a tight shot. Do you want to know how I approach the situation? I shoot both! Why fight? The actor insists on controlling his emotions, but I am sure that he should shed tears. Again, I shoot both. At the site, I don’t know what is right or wrong. The director is not the master. I have to be humble. The director’s job is more like telling the experts in which direction they should go. What if I don’t know whether the decision is right or wrong? Well, I just shoot. If you’ve got the time to quarrel, you can shoot the scene in just 10 minutes.

A. I make no plans at all. Life never goes as planned. My motto in life is to do my best no matter where I am. I am going to work hard like crazy this year, too. Honestly, I have no plans for my life!

The story of the director Yoon Je-Kyun was more like a movie. The countless experiences he will have in the future will give the youths enough strength not to be conceited or frustrated, right? I sincerely hope that the youths will live off the memories they made at the Youth Culture Club, and hopefully one day, they will mature and surprise someone!