CGV’s multi-screened special screening room ScreenX has had its excellent technology recognized in the U.K.

CGV’s ScreenX is recognized for its outstanding technology with the winning of the Technology of the Year award at CTC Awards. 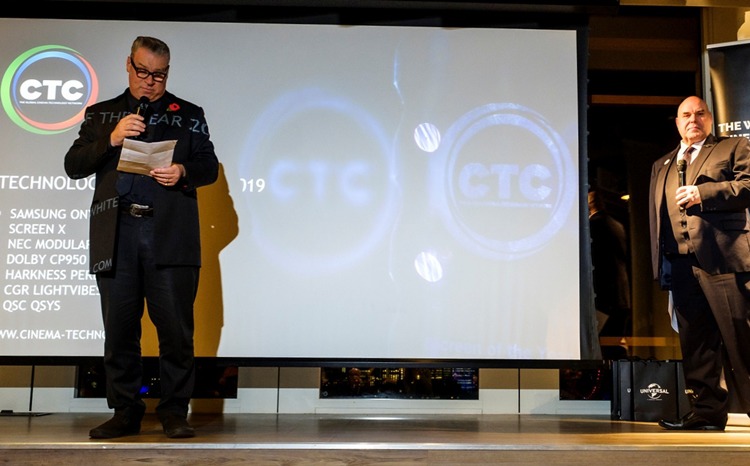 ▲ Presenters at CTC Awards, which took place in London, UK on the 11th.

CJ CGV affiliate CJ 4DPLEX, headed by CEO Kim Jong-Ryul, has announced that ScreenX won the Technology of the Year award at the Cinema Technology Community Awards (hereinafter, “the CTC Awards”) 2019, which took place on the 11th GMT in London, U.K.

The CTC Awards is an annual awards ceremony that honors individuals and organizations that have made outstanding achievements with regard to the advancement of the film industry and technology, and it brings together more than 150 industry officials, including the U.K.’s film critics and film score composers. At this year’s iteration of the CTC Awards, ScreenX achieved the distinction of being named in the “Technology of the Year” category, with its innovative technology — which maximizes the immersiveness of the movie-watching experience — having been recognized in the U.K., where it was launched last year. ScreenX is CJ CGV's multi-screened special screening room, and the technology, showcased for the first time in the world by CJ CGV, was created entirely in South Korea. Whereas existing screening rooms screen movies on a single screen squarely facing the audience, ScreenX employs three screens, one on the front wall and the other two on the left and right walls respectively, offering a 270-degree panoramic movie-watching experience. ▲ Film critic Mark Kermode who presented the Technology of the Year award at the CTC Awards 2019.

CTC chairman Richard Mitchell stated, "Each year, the CTC Awards has been awarding technologies that have the potential to bring new, refreshing elements to the movie-watching experience. This year’s Technology of the Year has been given to ScreenX because it has been continuing to expand globally at a rapid rate for the past year, and also receiving a lot of positive feedback from movie-goers around the world by providing them with a new way to enjoy movies.”

CJ 4DPLEX CEO Kim Jong-Ryul said, “We are honored that CTC has recognized ScreenX as the most innovative film technology of the year. ScreenX is an innovative technology that maximizes the immersiveness of movie watching with a new conception that goes beyond the frames of screens at existing theaters. Going forward, we will undertake ongoing efforts to enable a much wider audience around the world to experience ScreenX.”

Since its introduction at CGV Cheongdam Cine City in 2012, ScreenX has been launched in a total of 27 countries, starting with Bangkok, Thailand in 2014, followed by the U.S., the U.K., China, Indonesia, Vietnam, Turkey and France, with 268 screen rooms currently in operation around the world. In October last year, ScreenX had had its innovativeness recognized in the global market by winning the Innovation of the Year award at the awarding ceremony for the film convention ShowEast, held in Florida, U.S.

Previous
THE CJ CUP ends in success, earning accolades such as ‘Masters Tournament of Korea’