On August 11, CJ ENM, headed by CEO Min-heoi Heo, announced that DIA Festival, Asia's largest festival featuring one-person creator teams which is in its fourth iteration this year, had recorded a cumulative number of 152,000 visitors. This year's DIA Festival is notable in that it made its provincial debut in Busan in a bid to strengthen communication with local fans. DIA Festival 2019 in Busan, which took place at BEXCO from August 9 to 11, attracted more than 39,000 visitors, demonstrating the nationwide popularity of creators.

Kicked off by performances by entertainment creators "Feel Like Feel" and "Julala," DIA Festival 2019 in Busan featured 100 teams of creators and entertainers and offered 124 programs. On the first day of the festival, a long queue formed at BEXCO from as early as 7 a.m. by people gathering to attend the festival, raising expectations. Meanwhile, 11 creator teams based in Busan also participated in the festival, adding more significance to the occasion.

This year's DIA Festival stood out for its programs that encouraged active participation by audience members, including ▲ accomplishing missions and granting wishes, ▲ game and quiz competitions, ▲ tasting and evaluating food personally cooked by creators, and ▲instant fan meetings. 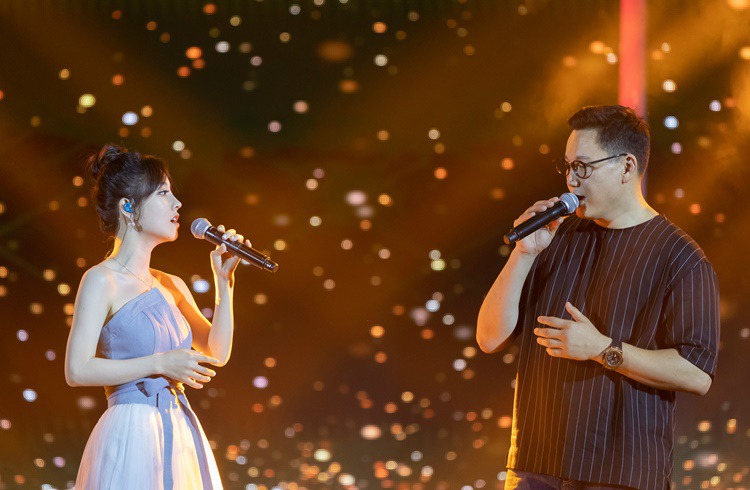 ▲ Influencer Feng Timo, who visited South Korea from China to meet her Korean fans, is giving a duet performance with esteemed vocalist The One.

In particular, ▲ Influencer Feng Timo, who has 50 million subscribers in China alone, visited South Korea to give her debut performance in the country at the festival, ▲ "HEOPOP," who has about 3.26 million subscribers, visited his hometown, Busan, for the event, and ▲"GoToe," who has created K-pop random play dance content in many major cities around the world, also made a random dance video in Busan for the event. As such, many creators whom their subscribers can rarely have a chance to meet gathered in one place and responded to the fervent response from the audience. ▲ Creator "Great Library" and rapper Mommy Son are giving a hip-hop performance together.

DIA Festival has grown into a festival integrated with commerce, providing the opportunity to meet creators as well as to visit corporate booths ▲ Creators who have reached 1 million subscribers are posing for a photo at a hand-printing event. (From left) "Suspicious Guys," "Lisa Rhee (Imlisarhee)," "GoToe," "Calary Girl," and "YoonCharmi."

Attendees at the festival visited creators' booths as well as corporate booths for their continuous festival experience, demonstrating that DIA Festival is a festival integrated with commerce operating under the slogan "Living Is So Fun." Audience members who visited spaces such as ▲ limited-edition product booths participated in by 14 creators including "Great Library," "HEOPOP," "Shugi," "Bogyum," and "Korea Grandma" Mak-rye Park, ▲ food trucks operated by creators including "SOF," "Honeykki," and "Nado," and ▲ corporate booths run by companies including Supercell, Dynafit, Hite Jinro, and Ohora Nails said that they experienced a level of fun there that set DIA Festival apart from other festivals.

Meanwhile, 30 companies chosen for the O!CreatUs (Open + Create + Us) contest, in which promising SMEs get matched with creators through the mediation of the hosts CJ Group and seven Creative Economy Innovation Centers nationwide, promoted their excellent products, with branded content (product promotional videos) created by matched creators also being showcased.

At the booth of international development and humanitarian organization Plan Korea, the prized possessions of 21 creator teams including "Lickerish Hatnim," "Daily Haneul," and "Murdoc" were auctioned as part of donation efforts.

Aside from this, there were many other events held throughout the venue including commemorative photography, gift giveaways, and a bazaar, and the festival also featured a finale show participated in by all creators who had performed on the stage and a hand-printing event participated in by 12 creator teams that had recently reached 1 million subscribers, adding to the meaning of participation through an abundance of attractions.

Next
THE CJ CUP to be Broadcast Live on tvN