- CJ ENM O Shopping DIV has been participating in the Hope T Campaign hosted by the Korea Disaster Relief Association "Hope Bridge" for six consecutive years. The recent iteration of the campaign was also joined by approximately 20 children of CJ staff members
- The participants in the campaign provided climate refugee children in Bangladesh with therapeutic foods for malnutrition as well as t-shirts that feature their handmade drawings
- CJ ENM is leading the “environment-first” trend through activities such as becoming the first company in the industry to adopt 100% paper packaging materials 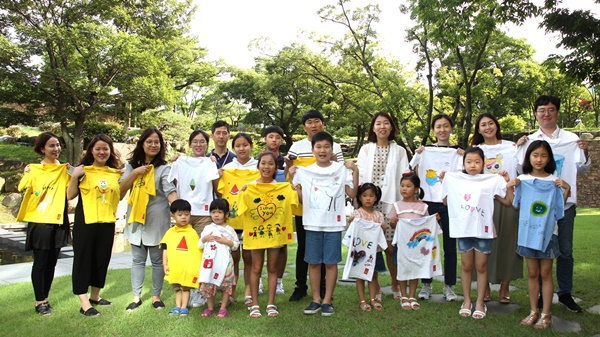 On July 29, 40 people from CJ ENM O Shopping Division (CEO Min-ho Heo), including the staff members and their children who are currently on vacation from school, participated in the Hope T Campaign which supports climate refugee children in Bangladesh. The participants gathered at the CJ ENM office building in Bangbae-dong, Seocho-gu, Seoul to learn about the situations of children around the world suffering from natural disasters caused by climate change and to deliver t-shirts that feature their hand-drawn messages of cheer and hope to those children.

The Hope T Campaign is a participatory donation program hosted by the Korea Disaster Relief Association "Hope Bridge." The hope t-shirts, on which the participants draw their messages, will be delivered to climate refugee children suffering from climate change in countries including the Philippines, Bangladesh, Ethiopia, and Sudan, along with a week's worth of therapeutic foods for malnutrition. Climate refugee refers to people whose homes and livelihoods have been destroyed by natural disasters caused by climate change. The United Nations estimates that 26 million people became climate refugees in 2015 alone.

The CJ ENM staff members and their children who participated in the day's event expressed the messages of hope they wanted to convey to climate refugee children as drawings on t-shirts and wrote messages of encouragement on postcards, sharing the pain of children suffering from natural disasters.

As an effort to protect the environment, CJ ENM has adopted and is currently using an eco-friendly packaging material called "eco-tapeless box," the first-ever 100% paper-based packaging material adopted in the industry. In May, CJ ENM also signed a voluntary agreement with the Korean Ministry of Environment to reduce packaging materials used for the distribution of goods. A CJ ENM official said, "Because the campaign program has been well received by the employees over the years, we planned this year's campaign program so that their children can also participate in it together with them. In addition to voluntary activities, we will also conduct other activities in line with the "environment-first" trend in a continuous manner."

Next
CJ CheilJedang Stands Tall as a Global Sustainable Company