Catch the Reality of Space! Hyun-gyu Kang from the Film Crew for the Movie 'Parasite'

A semi-basement room, the mere sight of which is enough to recall a moldy smell. A two-story mansion, which, at first glance, is enough to conjure an expansive view in front of your very eyes. One of the charms of the movie "Parasite" is the detailed manner in which the two spaces were captured on screen. Of course, the efforts undertook by director Joon-ho Bong and director of photography Kyung-pyo Hong may be the greatest contributing factor to that, but there were also the efforts of the film crew who helped perfect the movie alongside the two. Film crew member Hyun-gyu Kang recollects the memories of shooting "Parasite" last summer, saying that he worked really hard to contain reality in the frames of the movie. "I was extremely lucky to have participated in the making of "Parasite." There is no other way to put it."

On May 25, the movie "Parasite" received the Palme d'Or at the 72nd Cannes Film Festival. Not only was it the first Palme d'Or won in Korean film history, but it was also the best gift to commemorate the 100th anniversary of the birth of Korean film, which is being celebrated this year. The glorious feat at the Cannes Film Festival translated directly to the movie's performance at the Korean box office, attracting 10 million viewers as of Sunday, July 21, 53 days since its opening in South Korea, according to statistics from the Korea Film Council's integrated network for theater ticket sales. With this record, "Parasite" became the 26th film to achieve 10 million viewers, following "The Admiral," "Extreme Job," "Avatar," "Avengers: Infinity War," among others.

Hyun-gyu Kang says that it is pure luck that he was able to participate in the making of "Parasite" as a member of the film crew. And, his words ring true because that came about only three years after he became a film crew member. He, whose only childhood hobby was merely watching movies, happened to study film at university, and from there, he began to find his true calling. Then, he decided to learn underwater photography with the intention of building a skillset that could set him apart from others.

In fact, he made the decision despite having aquaphobia; his desire to boldly further his career spurred him on further than his apprehension holding him back. He made great efforts in this area of work, learning to scuba dive, and he eventually ended up participating as an underwater photography crew member in many movies and documentary films, including "The Pirates," "Vanishing Time: A Boy Who Returned," and "Along with the Gods: The Two Worlds." The reason why he decided to get out of the water and become a film crew member was that he wanted to experience even more things on the sets of movies. Underwater photography was only a small part of the whole practice of filming, and also, there was not a lot of work in this particular field, so he opted to join a film crew. The first movie he participated in as a film crew member was "The Outlaws," starring Dong-seok Ma.

He says that he kept very busy as a member of the film crew throughout the filming of the movie because, it being an action movie, there were a lot of movements and cuts, and that since the new work circumstances demanded him to work in a tenser state than before at the forefront of the set, he had a hard time adjusting. The movie became a hit, and that gave him some sense of fulfillment. Using this experience as a springboard for advancing his career, he then landed a job in director Chang-dong Lee's "Burning" and director Joon-ho Bong's "Parasite."

Mortal combat with narrow spaces and cameras – To always be filming requires one to be constantly trying new things!

▲ The film crew is working feverishly behind the scenes to shoot Gi-woo,
played by actor Woo-shik Choi, at an interview for a tutor position
(Image source: screen capture of a scene from the making of the movie "Parasite")

"A movie's film crew are important people upon whom the destiny of the whole movie depends."
– director Joon-ho Bong

As director Joon-ho Bong said above, a movie's film crew plays an important role on the set of the movie. Basically, the members of the film crew are tasked with setting up and operating the cameras suitable for each scene, and their work begins with pre-filming preparations. Once they undertake actual shooting after completing all the preparations for the filming itself, including test shooting and renting and purchasing of necessary equipment and consumables, they supervise all situations that come into the frames of the cameras, setting up the props, fine-tuning the lights, etc., although what they are required to do varies according to the movie.

A film crew usually has a director of photography and consists of 3-4 members. In the case of "Parasite," 1st assistant took charge of focus control, 2nd assistant for equipment management, and 3rd and 4th assistants for shooting support and management of batteries and consumables. Hyun-gyu Kang joined the set as 3rd assistant, contributing diligently to the completion of the film through tasks such as operating the clapperboard. 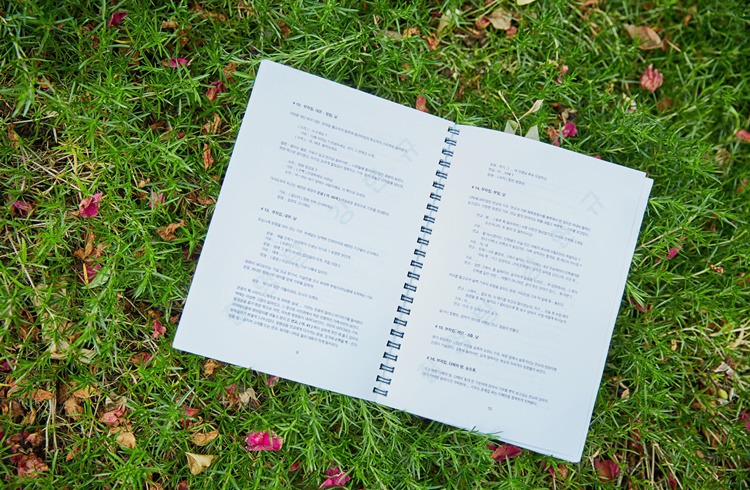 ▲ Script for "Parasite." If you take a close look, you can see the words "Hyun-gyu Kang from the film crew" written on it.

In particular, there is a scene where he put forth his utmost effort for the movie, where Gi-taek, played by actor Kang-ho Song, becomes submerged in his semi-basement room. Normally, film crew members have baselines against which they assess the intensity of their work for the movie, namely, night scenes and rain scenes. In "Parasite," it rains so heavily that even a house gets submerged. He already knew that would happen from the movie's script, and as he had experience and expertise in underwater photography, he contributed a great deal to shooting that particular scene, acting as a bridge between the film crew and the underwater photography crew. But, that does not mean there weren't any difficulties.

There were problems with the camera's waterproof housing and battery connections, which have to do with underwater photography. The camera used for the underwater photography for this movie was Arri Alexa 65, which was also used for director Joon-ho Bong's previous movie "Okja" and the movie "The Revenant." Because the camera is not used frequently in South Korea, the underwater photography crew didn't have enough expertise in operating it. The problems with the size of the waterproof housing and battery connections were also attributable to the inadequacy of expertise. Fortunately, the crews managed to create the best shooting conditions through cooperation and got the job done as director Joon-ho Bong initially pictured it. Kang says that the job was strenuous, but he felt a great sense of fulfillment when he finally watched the finished high-quality submersion scene at the movie's premiere. ▲ A photo depicting shooting in a semi-basement, which was extremely stifling for Kang

One notable thing about "Parasite" is an attempt to capture as much of a narrow space as possible with a single camera; the reason why Arri Alexa 65 was chosen for the movie was its angle of view, which is twice as wide as that of an ordinary camera. Such a strength of the camera shone in Gi-taek's semi-basement room, which was a difficult environment for those tasked with the shooting. Hyun-gyu Kang recounted a not-so-funny anecdote in which all crew members told each other not to be edgy and to be careful not to bump against each other before commencing a shooting session. ▲ As modern as a young man can get? Hyun-gyu Kang even starred in the movie. (Image source: screen capture of a video of the "We Support End Credits" campaign)

Kang even participated in "Parasite" as an actor; he played an office worker who looks at Gi-taek in a scene where Gi-taek visits the office of Dong-ik, played by actor Sun-gyun Lee. Director Joon-ho Bong says that he gave the role to Kang because he liked Kang's modern young man vibe. However, Kang himself says that he doesn't feel that he has such a vibe and is just content that he was able to have the new experience of acting in a movie, expressing gratitude to the director.

"So, you've had plans all this time?" I do what my heart tells me to do, rather than making plans! 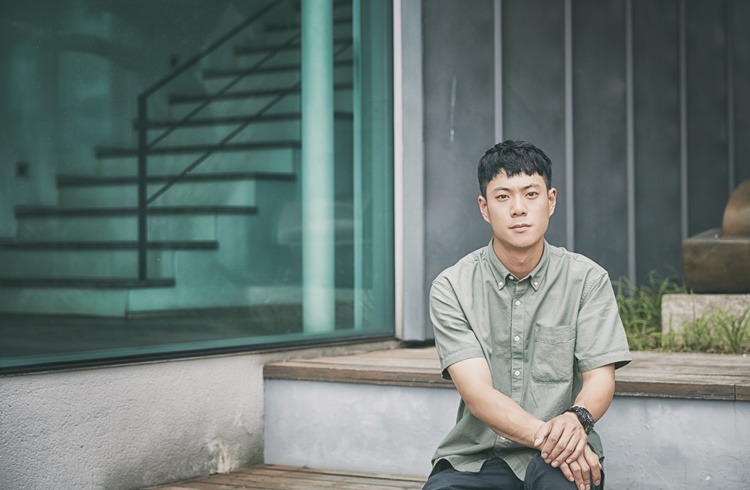 ▲ For Hyun-gyu Kang who has participated in three movies over the last three years, film sets are a place to learn. (Photo taken at the Kim Chong Yung Museum with permission)

Although he has only participated in three movies over the last three years, he says that he has learned a lot from those films, both with his body and mind. From "The Outlaws," he learned the hardships on movie sets he had only been hearing about, and from "Burning," he learned how to wait for the right moment, and from "Parasite," he witnessed a magical moment in which suspense was created within a single cut.

In particular, he says that by working successively with director of photography Kyung-pyo Hong in "Burning" and "Parasite," he was amazed each time by the efforts Hong made to capture his desired light; despite his lengthy career, when he had shot a scene consistent with the story, Hong always showed his delight like an innocent child. Watching such a demeanor of Hong, Kang reflected upon himself, looking back on the time he almost decided to quit due to the difficulty of his job during the filming of "The Outlaws." Working with director of photographer Kyung-pyo Hong and seeing his own name appear in the end credits of movies, Kang has developed a deep sense of responsibility and the determination to do better going forward. The mindset where he feels compelled to do his utmost (not to be detrimental to the movies he participates in) as a working professional in film due to the precious movie-goers who watch films until the end credits come up bespeaks his attitude towards his work going forward.

Kang gave the following piece of advice to those who aspire to become film staffers: "Even if you find your job to be very hard, do not quit until you have worked on the sets of at least two movies." His advice is pertinent in that one needs to work things out through trial and error when starting a new job. He emphasizes that one should keep doing their job until the very end if they chose the position of their own accord in the first place. 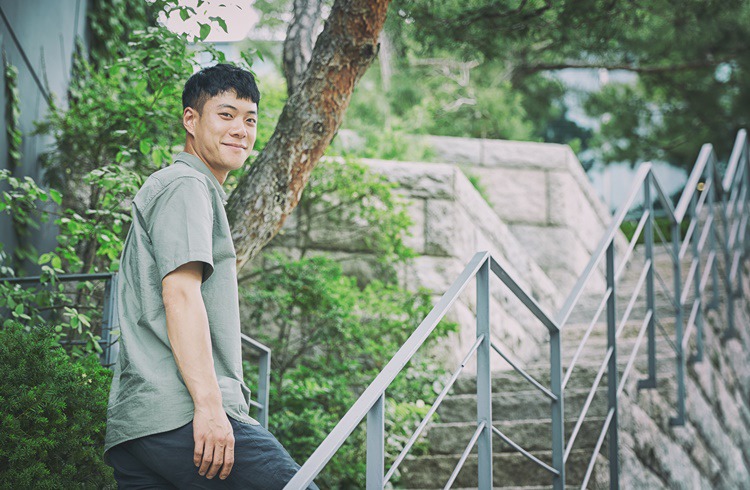 ▲ Hyun-gyu Kang says he will try new things as a film crew member while continuing to think and converse. (Photo taken at the Kim Chong Yung Museum with permission)

"I think it is important to do my best to yield results in a professional manner rather than simply working to be recognized by other people. I'll work hard with this determination always in mind and come back with another good movie."

"Son! You've had plans all this time!" Unlike the above line from Gi-taek in the movie, Kang has always done what moved his heart rather than making plans in advance. This is true for his choosing to study film at university, his foray into underwater photography, and his joining a film crew. Kang says that he cannot help but try what he genuinely wants to do at least once. We look forward to his outstanding performance as a film crew member, who is required to try new things all the time.