On June 17, 2019, CJ Group held a media day at the Ministry of Culture, Sports and Tourism of Vietnam and officially announced the launch of the CJ National Youth Taekwondo Championship in Vietnam. ▲ Joong-hyeon Kim, manager at CJ Vietnam, is speaking at a press conference held in advance of the CJ National Youth Taekwondo Championship 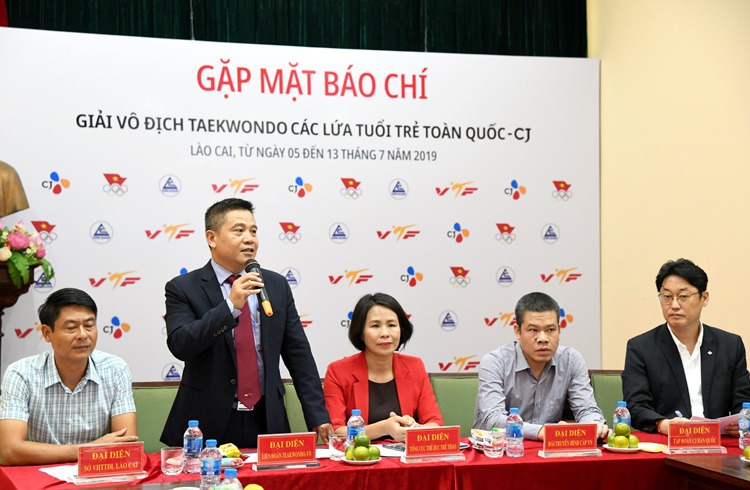 ▲ Vu Xuan Thanh, VP of the Vietnam Taekwondo Federation, is speaking at a press conference held in advance of the CJ National Youth Taekwondo Championship

Scheduled to take place in Lao Cai for a week from July 7 to 13, the CJ National Youth Taekwondo Championship is Vietnam's first-ever Taekwondo competition in which national titles are awarded by a foreign company.

"Currently, there are several national Taekwondo competitions taking place in Vietnam, including the National Sports Festival, the Taekwondo Championship hosted by the Ministry of Culture, Sports, and Tourism of Vietnam, and the Taekwondo Championship hosted by the Vietnam Taekwondo Federation. However, we have so far been refraining from allowing foreign companies access to national titles," said an official from the Vietnam Taekwondo Federation. "However, taking into consideration CJ's consistent support for Taekwondo in Vietnam since 2012, we have eventually made an unprecedented decision to allow a foreign company to use national titles, and we believe that this competition will serve as a cornerstone for the development of Taekwondo in Vietnam, a country emerging as a Taekwondo powerhouse."

Truong Thi Kim Tuyen, a member of the Vietnam women's national Taekwondo team who is currently ranked 13th in the world, is working very hard to achieve the goal of winning Vietnam's first-ever gold medal in Olympic Taekwondo at the Olympic Games Tokyo 2020, and another national team member, Ho Thi Kim Ngan, has recently received the Victory Cup’s Rookie of the Year Award, which is given to Vietnam's best athlete, and in turn is gaining national attention.

CJ Group, which has been supporting Taekwondo in Vietnam, aims to create a Taekwondo craze in Vietnam and thereby spread K-Culture

A CJ Group official said, "CJ Group will continue to make efforts to nurture Vietnam's Taekwondo scene and keep the Korean wave craze in Vietnam going by promoting the excellence and spirit of South Korean national sport Taekwondo and, in turn, spreading K-culture far and wide."

CJ Group entered the Vietnamese market in 1998 and has since established four business divisions – food, biotechnology, new distribution, entertainment & media. The company considers Vietnam as a critical country for its overseas business operations along with the U.S. and China. In Vietnam, CJ Group has been conducting a variety of social contribution activities tailored to local circumstances, including the Saemaul Project for strengthening the rural value chain (2014-), the Scholarship Project for Youth in Low-Income Families in Lam Dong Province (2013-), and the CJ-UNESCO Training Project for Vietnamese Girls (2019-).

Next
CJ to Grow Together with Indonesian SMEs