CJ to Build a Cutting-edge 20,000-seat Arena in Goyang with a Leading Global Company

CJ is to build a cutting-edge 20,000-seat arena in Goyang, Gyeonggi Province in cooperation with Anschutz Entertainment Group (AEG), the world's No.1 arena operator and global sports and entertainment company based in the US. 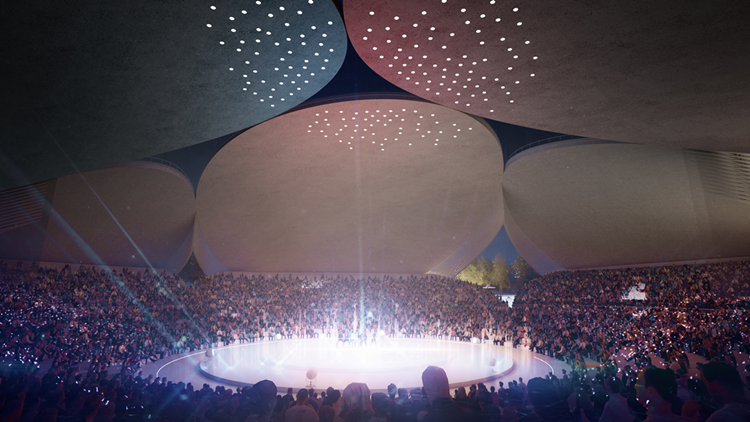 CJ LiveCity Corporation announced on June 10 that they will construct a 20,000-seat arena in the new concept cultural complex CJ LiveCity on the Hallyu World site in Janghang-dong, Goyang and turn it into a key landmark of CJ LiveCity through world-class architectural design.
CJ LiveCity's arena will be designed with advanced IT technologies to become a symbolic space for K-pop that represents Hallyu as well as a cutting-edge concert hall for the world's top-quality live performances. The inside and outside of the arena will be connected so that the audience in the arena and visitors of the complex can enjoy an "in & out" experience together.
To this end, CJ LiveCity Corporation signed an MOU with AEG, the world’s No.1 arena developer and operator in the US and began fully discussing the concrete details of cooperation on both ends.

Signing an MOU with AEG to combine CJ's cultural content competencies and the world's No.1 arena operator's know-how

AEG owns and runs over 160 big arenas representing different countries of the world, such as STAPLES Center in LA, The O2 in London that has attracted more than 50 million visitors since opening, Mercedes Platz in Berlin, and Mercedes-Benz Arena in Shanghai. More than 20 out of the top 100 arenas in worldwide ticket sales are owned or run by AEG.
AEG currently has a joint venture (JV) with MGM to run T-Mobile Arena in Las Vegas and is currently building a large arena in Bangkok by entering into a JV with The Mall Group, a major retailer in Thailand. One of the major arenas of the US, STAPLES Center, and L.A. Live located in LA has over 22 million visitors a year.
AEG is also the world's No. 2 performance promoter that will oversee performances by global artists in running CJ LiveCity's arena. AEG has experience hosting tours of top global artists including Ed Sheeran, Justin Bieber, Paul McCartney, Elton John, Celine Dion, Taylor Swift, The Rolling Stones, and Katy Perry.
The industry points out that the key success factors for a world-class arena are securing high-quality contents based on world-class facilities and management competencies as well as enhancing business value. Accordingly, this partnership with AEG that has a lot of global experience in developing and operating arenas and cultural complexes will be a critical factor for the success of CJ LiveCity's arena.
"AEG is the arena industry's leading group of experts possessing a broad range of best practices, and the alliance of CJ and AEG is an integration of CJ's long-running cultural business competencies and AEG's arena management know-how and competencies as a global performance promoter," said Cheon-soo Kim, CEO of CJ LiveCity. "The arena that will be built in Goyang will have a competitive edge in not just Northeast Asia but the whole world as a venue for the world's greatest performances including K-pop."

Meanwhile, AEG is also holding great expectations for the partnership with CJ. AEG determined that considering Korea's high-income level, robust economic infrastructure, maturity and future growth potential of the live performance market, there is a good enough environment for success of the arena business. The company is also deeply satisfied with the arena's location in Goyang as well as the competencies as a partner of CJ Group.
"CJ and AEG have a highly similar culture in that they have both led the entertainment industry," said AEG Asia’s CEO Adam Wilkes. "With a whole new concept and contents that have never existed before in the world, we're going to lead the live music market in not only Korea but also Asia and even the entire world."

CJ LiveCity is expected to produce an economic effect of 13 trillion KRW and jobs for over 90,000 people for ten years after completion

The CJ LiveCity construction project had been delayed for a while due to licensing issues, until the licensing was finally approved in November 2018. Then, the project was accelerated by signing the Mutual Agreement for Regional Development to Stimulate the Hallyu Content Industry and Revitalize the Tourism Complex between Goyang municipal government and CJ LiveCity Corporation in February 2019.
CJ LiveCity, which will be comprised of the cutting-edge arena, experience-based studio, content playground, and Hallyucheon Waterfront Park, is expected to produce an economic effect of 13 trillion KRW and jobs for over 90,000 people for ten years after completion, attracting 20 million local and global tourists a year. It will also contribute to revitalizing the regional and national economy as the landmark of northern Gyeonggi and the leading tourism hub of Korea.
CJ LiveCity Corporation has submitted a new business plan with these details to Gyeonggi provincial government in April and is currently waiting for approval. The company will break ground for the project once the related procedures are complete.

Previous
CJENM odense Enters the Global Market for the First Time Backed by its Popularity in Korea, Sold on Eastern Home Shopping in Taiwan