In terms of television shows, it would be more like a daily soap opera. In terms of sports, it would be more like a marathon. Working for Project Team 2 in CJ Logistics as the overseas logistics manager, Lee Areumdeuri’s job requires careful planning over a long period of time and going a great distance. His recent work involving overseas shipping in Turkmenistan required over four years of effort. So after his hard work over such a lengthy period, what did he face in the end?

A new challenge in the name of ‘Project Logistics’! ▲ Lee Areumdeuri, a member of Project Team 2 at CJ Logistics

CJ Logistics is widely known as the provider of door-to-door delivery, but that is not all. The activities of CJ Logistics are being expanded not only within Korea but to overseas as well. The recent news of CJ Logistics’ success in another project logistics case that spanned 17,000km from China’s Zhangjiagang to Karshi, Uzbekistan, over the period of six months to transport 1,763t worth of heavy plant equipment in September 2018 is a testament to its capacity.

‘Project Logistics’ takes up a large part of overseas activities, such as the Uzbekistan job. It refers to the provision of all heavy cargo and materials that are needed for large-scale construction of plants and industrial complexes through land, sea, and air transportation in order to meet construction milestones. After completing his internship at CJ GLS, he joined the company through open recruiting. Following his work in the field of domestic deliveries, he was assigned to Project Team 2 in 2013 to lead this project.

Project logistics came to him as a new challenge since it deals with the transit of heavy cargo in the international, not domestic, arena. So, he approached every task with the attitude of a new learner. Once a ready-to-ship notice was issued from a construction company for its freight, he drafted shipment priorities based on a logistics status checklist and also prepared documentation required by each country and transit port. With particular to his first project transit, he personally made way to Dammam, the second largest port city in Saudi Arabia, to observe and monitor the cargo’s unloading and transportation process. Knowing that entry into port is not as accessible for foreigners, the preparation for necessary documents took up to three weeks in order to receive formal approval. We can only imagine his excitement when the official approval was obtained.

Transit in Turkmenistan, fighting against all odds!

Lee Areumdeuri’s connection with Turkmenistan began in 2015. Hyundai Engineering, who was qualified to carry out Engineering Procurement Construction (EPC), received an order from the Turkmenistan state gas company to build a petrochemical plant. With over 36 case studies of project experience in 26 countries in refinery and petrochemical fields, CJ Logistics was selected as the logistics partner and Lee Areumdeuri’s Project Team 2 was tasked with general transportation duties for machinery, equipment, and materials for the plant construction over a period of four years.

“From steel frames to desks, I have handled the transit for practically everything imaginable.”

Once preparations were complete, the actual transit began in earnest in April 2015. Steel frames that act as the backbone of construction were sent every week in 50 to 100 containers (of 40ft beams), and various types of construction equipment, chemicals, and even office chairs followed way. The A to Z of all that’s needed for a construction site. 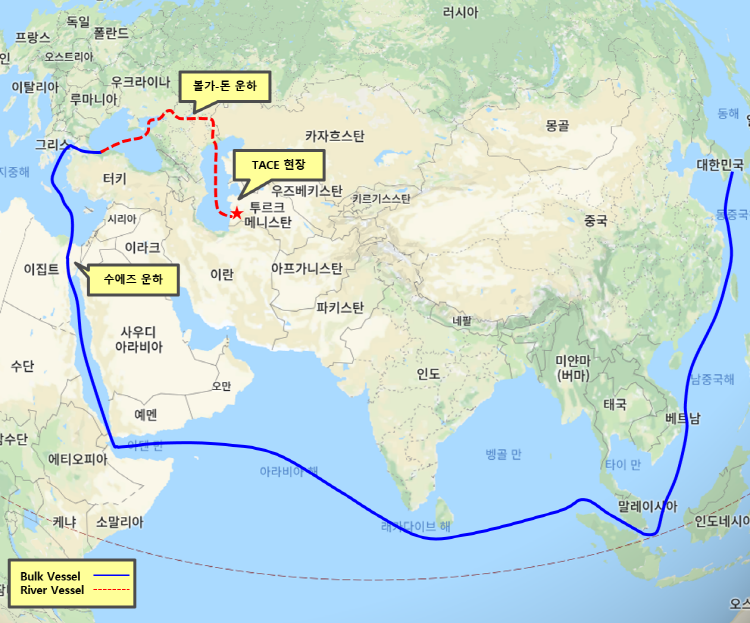 ▲ The route through Volga-Don Canal.

The problem was the route. Because vendor outlets are located in each country, there were differing routes to each construction site and shipping methods and time requirements were all unique each time. For example, starting from Busan, the transit journey took place through the Suez canal, Turkey’s Istanbul, the Volga-Don Canal, Turkmenistan’s Turkmenbashi, and finally to the destination of Kiyanli, encompassing different modes of transportation such as ‘ship → river vessel → truck’ that takes three months in total. Just like this, it was Lee Areumdeuri’s job to constantly check on the status of logistics inbound from other countries. As Volga-Don Canal, an important transportation route, blocks off its waterway by mid-November, it was necessary to plan ahead and to closely monitor the process for speedy, foolproof transit. 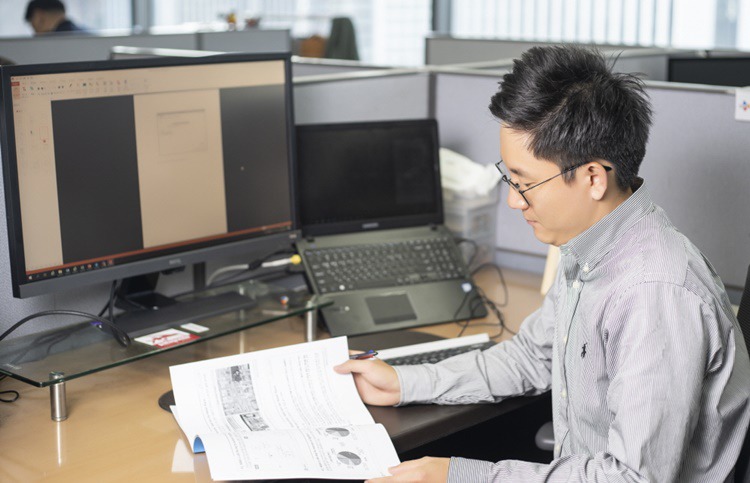 ▲ Check and doublecheck all required documents and checklists at each port!

Normally in the case of transporting heavy cargo on land, bridges must be reinforced with government approval and obstruction must be cleared beforehand by cutting and reattaching electric wires. Fortunately, Turkmenistan’s arrival point was only 40km away from the port, reducing the number of potential variables. But because of the road condition that was often narrow and covered with sand, a daily condition check was mandatory.

That was not the only item on the checklist. At every port, much time was required to prepare all the necessary documents. Turkmenistan, in particular, required a great deal of detailed information for each item in cargo. With even stationary items like binders, the document required specific information such as material, size, quantity, color, country of origin, date of production, and other names. Even he, recognized for the attention to detail on his team, had trouble working through the pile of paperwork. ▲ Unloaded GTG equipment is then loaded onto a truck. It looks absolutely huge!

After a series of such steps, many materials were transported. The most difficult cargo in this project was the gas turbine generators (GTS). Whereas Uzbekistan’s heavy plant equipment was represented by its catalyst container, it was the transit of three GTG units in the case of Turkmenistan. It was an important item that was much heavier and larger in volume than other materials, so he took extra care. Especially with CJ ICM’s help, he created a stable transit condition by pre-calculating the load’s weight and height when loaded onto a ship. In addition to this, tasks related to this operation, such as preparing a shared load of accessory materials as per the reference load and their subsequent paperwork, took up seven months of time.

What has he gained through this long journey? As with all things, the success of this Turkmenistan project was not solely due to the performance of Lee Areumdeuri. It was rather the result of stellar teamwork that concluded the long journey over those four years. There are 31 members in Project Team 2. For the project in Turkmenistan, up to 8 members participated at the same time, including the core staff. They went on numerous business trips to both the company headquarters and client offices worldwide, helping with checklists, documentation, information briefings, and important communication to ensure smooth transportation of goods. All of these efforts contributed greatly to the project’s conclusion without a hitch. When he was dispatched to domestic client companies, he also overcame hardship by working closing with his colleagues.

He realized many things through this project, one of which is ‘flexibility’. Some are assigned again to the same region as a regional expert, but many are put in charge of a new continent or a country. Whenever a new assignment commences in a new country, all preparations must begin anew from scratch including the customs, culture, and the inclination of client partners. To this end, it is crucial to study up on related fields, and also to be able to provide a flexible solution that can help reduce variables. He emphasized that his subordinates, those interested in project logistics in the future, would do well to keep that in mind. ▲ Lee Areumdeuri, working to improve his work expertise and to prepare for another long journey ahead.

Foreign languages also come as an integral part of his job. He says a substantial amount, around half, of his work is done in other languages. Corresponding with overseas clients via email takes up a large portion of his communication, so he also analyzed many business emails written by foreigners to understand how to write emails for work. He also revealed this personal effort to improve his language skills by studying with a tutor over the phone for two years.

After safely wrapping up his long, four-year journey, he is enjoying the sense of relief and reward with his colleagues. We asked about his future plans, now that he is preparing for another long journey ahead.

“Until CJ Logistics becomes a globally renowned brand, until it becomes No.1 in the world, I hope to continue my work in delivering heavy cargo to various countries."

Lee Areumdeuri says it is always important to stay humble and to understand where the other party is coming from, since the work routinely entails meeting people of all nationalities. It is because everyone must grow together in order to approach the common goal of a group. The meaning of his name is to ‘live life with a generous mindset like a beautiful tree’. Perhaps the destiny itself was hinting at his profession.